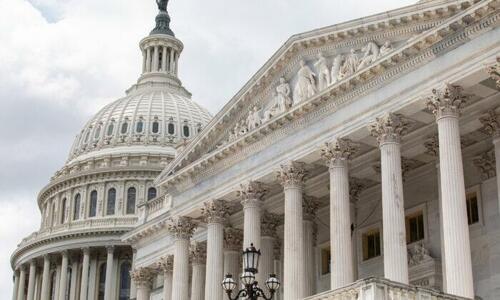 Lawmakers have at long last unveiled the legislative text of the huge $1.7 trillion “omnibus” government funding bill for all of fiscal year 2023, with apparent wins for both parties like boosting non-defense discretionary spending, while keeping restrictions on funding abortions.

“The choice is clear. We can either do our jobs and fund the government, or we can abandon our responsibilities without a real path forward,” Leahy said in a statement. “Passing this bipartisan, bicameral, omnibus appropriations bill is undoubtedly in the interest of the American people.”

Before we get into the details, The Wall Street Journal’s Kimberley Strassel sums up the bill perfectly:

This “omnibus” is one of the ugliest, least transparent bits of lawmaking I’ve ever seen…and that’s saying something. It isn’t just the spending, though the new domestic numbers are gross, given the trillions spent in the past few years.

Every one deserves a full debate and a roll call vote, so that Americans can see where their representatives stand. Instead, this monstrosity is cooked in a back room, and members can claim they had no choice but to vote against a shutdown–ducking accountability.

Not that any members will have time to read this 4,155 pages of bad policy, obscene spending, and self-serving pork and earmarks. They’ll just vote and go home for Christmas. Your government at work. GOP and Ds are just as bad as each other.

As The Epoch Times’ Tom Ozimek detailed earlier, Senate Appropriations Committee Chairman Patrick Leahy (D-Vt.) released the bill (pdf) late Monday, urging members of the House and Senate to take up the 4,155-page bill and “pass it without delay” as government funding is set to expire on Dec. 23 at midnight and a shutdown looms.

The full-year government funding bill, commonly known as an “omnibus” for its catch-all scope that funds multiple federal agencies, is first expected to be taken up by the Senate for possible passage by Thursday, then to the House, and later to President Joe Biden’s desk for a signature by Friday’s deadline.

Failure to pass the legislation could bring a partial government shutdown beginning Saturday and potentially lead to a months-long standoff after Republicans assume control of the House on Jan. 3, ending the Democrats’ monolithic grip on power in Washington.

The bill is the product of long-running negotiations between Democrats and Republicans in Congress, which ran into less routine sticking points like the location of the new FBI headquarters and more standard fare like the GOP pushing back on what it views as wasteful pork-barrel spending on programs unrelated to defense.

“This omnibus bill represents the last best chance for Democrats to push funding for their policy initiatives before Republicans take over control of the House—and it is already significantly scaled back from their ambitious earlier designs,” Gerard Filitti, Senior Counsel at The Lawfare Project, told The Epoch Times in an emailed statement.

“What is not included in this bill, among other things, is billions in dollars in pandemic aid requested by President Biden—a category of funds that has previously been used to fund policy initiatives only tangentially related to the pandemic,” Filitti continued, noting further that an enhanced Child Tax credit and cannabis banking legislation also failed to make the cut.

Sen. Chuck Schumer (D-N.Y.), the top Democrat in the Senate, said on Dec. 14 that, “nobody is going to get everything they want, but the final product will include wins everyone can get behind.”

The full details of the package were being crafted over the weekend, with the draft released late Monday showing that the legislation includes $772.5 billion for non-defense discretionary programs and $858 billion in defense funding.

Members of both parties claimed their own victories in the sprawling bill.

Republican victories include retaining longstanding restrictions on funding for abortions and trimming funding for the Internal Revenue Service (IRS).

The IRS is set to receive $12.3 billion, a $275 million cut from the prior year’s level, a welcome development for Republicans who were upset over the $80 billion funding boost for the tax agency outside the regular appropriations process in a bill earlier this year that passed without GOP backing.

“The non-defense portion of the budget is only a modest increase over the previous year (a net decrease when adjusted for inflation), and this represents a victory to Republicans and the handful of fiscally-responsible Democrats who want to keep spending in check,” Filitti said.

McConnell on Monday touted the deal as a win for Republicans because of that very reason, namely that the package raises defense spending above the rate of inflation.

A topline summary (pdf) of each of the omnibus package’s 12 appropriations bills shows that all are slated for increases to varying degrees.

Funding for bipartisan priorities includes $58.7 billion for programs authorized by the Infrastructure Investment and Jobs Act; $1.8 billion in new funding to implement the CHIPS and Science Act of 2022; and $5 billion for the Cost of War Toxic Exposures Fund to implement the PACT Act.