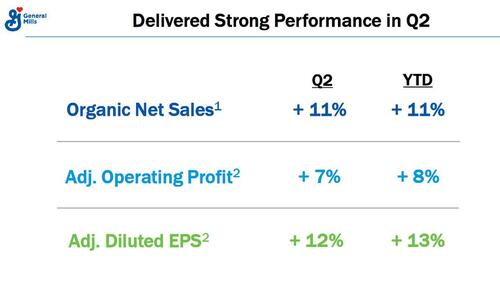 Sales volumes – which are one half of the revenue equation along with price – are sliding, as the inflation which has helped firms raise their prices is starting to cool. For now, price increases have propped up profits, even with shrinking volumes. But weakening pricing power ahead, along with accelerating declines in volume, spells trouble for equities.

As Maranz warns, that combination looks unsustainable, even if food inflation keeps outpacing other categories. (Food prices climbed “only” 0.5% in November.)

Last month, packaged-food peer Kellogg also reported contracting organic volume, while cleaning supplies firm Clorox sank after volumes (labeled the worst by far of the earnings season) tumbled. At the time, that raised questions about plans for further price hikes. Deteriorating volumes on higher pricing were in focus at Colgate-Palmolive and PepsiCo.

As Maranz concludes, watch for more signals about macro conditions as companies that reported surprisingly poor results last quarter are due to release results this week, including FedEx and Nike after the bell.

General Mills shares dropped as much as 5.4%, the most intraday since May 18 after analysts cited concern over continued volume declines reported in the packaged food company’s second-quarter earnings release. On the call, GIS said it plans to raise prices again in early calendar 2023. 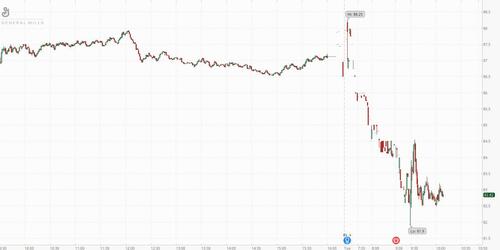 Here is a snapshot of a couple of sellside reactions to the company’s disappointing results: