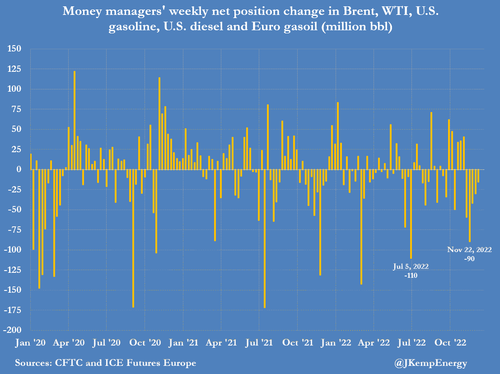 Investors sold petroleum for a fifth consecutive week but the pace of selling slowed as the balance of risks began to shift to the upside and beaten down prices provided a more attractive re-entry point.

Hedge funds and other money managers sold the equivalent of 15 million barrels in the six most important petroleum-related futures and options contracts over the seven days ending on December 13.

Fund managers sold a total of 236 million barrels over five weeks starting on November 8, according to position records published by ICE Futures Europe and the U.S. Commodity Futures Trading Commission. 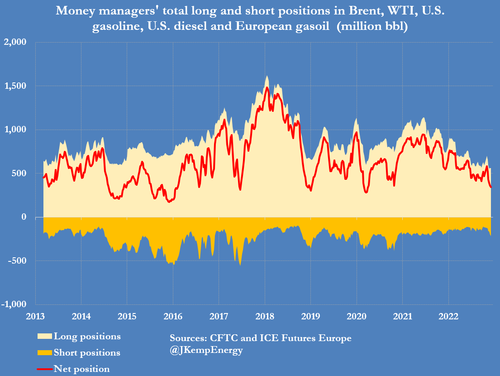 The bout of long liquidation in the three weeks from November 8 to November 29, when long positions were slashed by 147 million barrels has been completed, with longs increasing by 5 million in the last two weeks.

In the most recent week, there were continued sales of Brent (-6 million barrels), U.S. diesel (-7 million) and U.S. gasoline (-5 million) and no change in European gas oil. For the first time in five weeks, however, there was small buying in NYMEX and ICE WTI (+2 million barrels), marking an important shift in sentiment.

From a fundamental perspective, the outlook for oil prices remains mixed.

Production cuts by OPEC⁺, sluggish output growth from U.S. shale, and the eventual re-opening of China’s economy are bullish for oil prices.

But the current business cycle slowdown across North America and Europe plus disruption from China’s exit wave of coronavirus infections are bearish in the short term.

From a positioning perspective, however, the balance of risks has clearly tilted towards the upside, especially in crude oil. 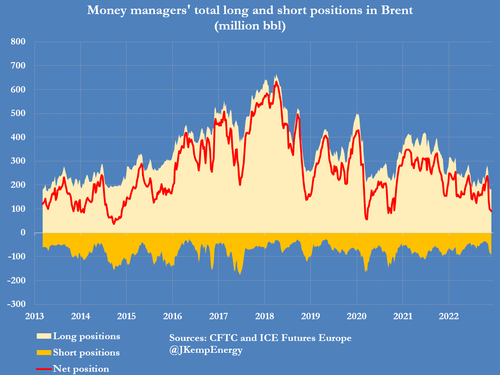 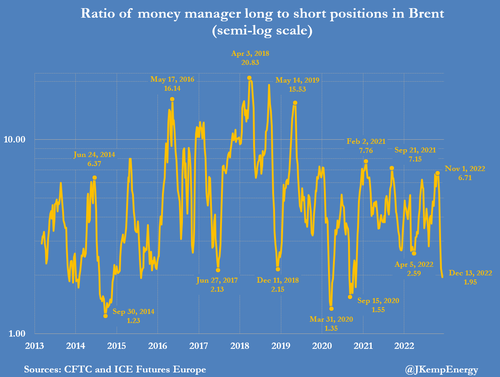 With positions already so bearish, there is considerable scope for investors to rebuild bullish long positions once the news flow becomes more positive or at least less negative, which would likely lift prices in the short term.