80% Of Kiev Region Without Power Amid Rolling Emergency Blackouts 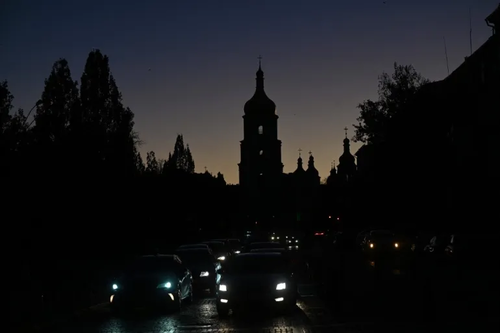 Ukraine is bracing for yet more Russian attacks on its energy infrastructure, and has accused Moscow of intentionally unleashing additional suffering on the population headed into Christmas.

“Russian terrorists will do everything to leave Ukrainians without electricity for the New Year,” he claimed.

“It is important for them for Christmas and the New Year to take place in darkness in Ukraine,” and then warned:

“That’s why we should prepare for new attacks.”

Kyiv Governor Oleksiy Kuleba has described the power crisis as being at its worst since the war began, with some 80% of the entire capital region being without electricity for a second day in a row, after drone strikes hit power stations Monday.

“The situation with electricity supplies remains critical,” Kuleba said in a written announcement. “I want to stress that with every shelling by the enemy, the complexity and duration of the repairs increase.”

Meanwhile Ukrainian officials have accused Russia of trying to “steal” Christmas, on a day where drones continued to hit the national power grid:

Kyiv officials on Monday illuminated a Christmas tree in the city center, refusing to let Russia “steal” the festive season from Ukrainian children.

The day, which started with swarms of attacks on critical infrastructure in the Ukrainian capital, ended with the unveiling of the 12-meter (40-feet) high artificial tree decorated with white peace doves.

A few dozen residents braved the sub-zero temperatures to admire the tree located next to the Saint Sophia Cathedral and its emblematic golden domes — and take selfies.

National energy operator Ukrenergo said it is fast working to restore services but initially this will allow power to less than half the population.

“Supplies to critical infrastructure are a priority. We expect that today we will be able to turn on equipment to enable the security of supplies to be increased, reduce the capacity deficit and connect more consumers,” it said Tuesday. There were reports that many neighborhoods saw power restored later in the day and into night hours, amid rolling emergency blackouts.

Trudging home in icy conditions during #Kyiv #blackout. Temperature -5 C, but heating still on at home. Water also unaffected. Power out for 24 hours, most of time no Internet and very little news. Listened to radio. pic.twitter.com/ENYrVhJq3l

Across the border, in Russia’s Belgorod region, emergency crews are also working to restore power after a rare Sunday cross-border attack launched by the Ukrainian military left thousands in the dark. At the same time, temperatures continue to plunge headed into the colder winter months in both countries.