These Are The Most Valuable NFL Teams In 2022 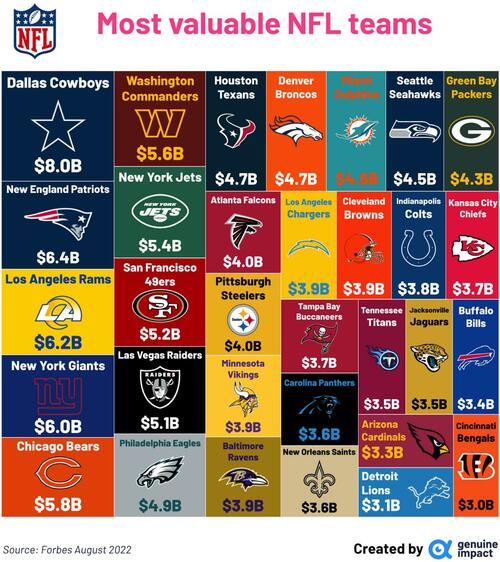 The world’s most valuable sports teams include internationally beloved soccer clubs, massive NBA franchises, and renowned MLB teams. But, it’s the National Football League (NFL) that arguably tops them all.

In June 2022, the Denver Broncos sold for $4.65 billion, a record for the most expensive team purchase. But if other teams were to sell, they’d potentially command an even greater price tag.

Which teams, and conferences, reign supreme in value? This graphic by Truman Du uses data from Forbes last calculated in August 2022 to show the most valuable NFL teams.

To calculate team values, Forbes used enterprise values (total team equity plus net debt) and factored in each team’s stadium-related revenue. This includes non-NFL revenue that accrues to each team’s owner, but doesn’t account for the stadium’s real estate value.

The findings? NFL teams continue to become more valuable, rising in 2022 to an average of $4.47 billion, an increase of 28% year-over-year.

At the top of the rankings, the Dallas Cowboys sit at an estimated valuation of $8 billion, making them the most valuable sports team in the world.

They were the first team to generate over $1 billion in annual revenue thanks to massive sponsorship deals, including an estimated $220 million in stadium advertising and sponsorship revenue.

This is especially impressive, since NFL teams actually share just over 70% of football-related revenue. As Forbes points out, the Cowboys have been the most successful at capitalizing on stadium and branding in order to boost external revenues.

Most Valuable NFL Teams by Conference

Truman also broke down NFL team valuations by conference, highlighting the extra monetary weight one has over the other. 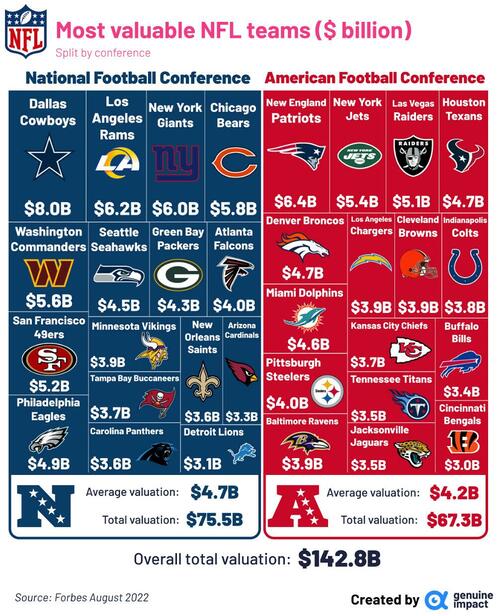 Impressively, NFC teams had an average valuation about $500 million higher than the AFC. It also had five of the six most valuable teams, with just the #2 New England Patriots representing the AFC at the top.

But with the most recent record sale taking place in the AFC (Denver Broncos), and more potential high-profile relocations and sales in the wings, the landscape of NFL team values might shift yet again in the near future.