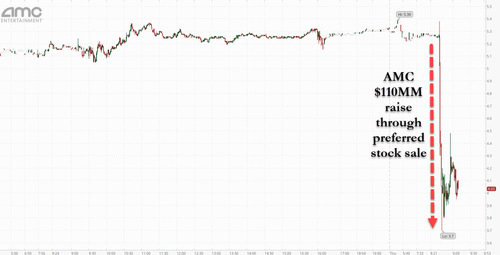 AMC’s equity is getting torched this morning in the pre-market session after the company revealed a $110 million equity capital raise and a $100 million debt for equity exchange and a proposed vote to convert the company’s “APE” preferred shares into common shares – before undertaking a reverse split.

The market seemed…unamused at the announcement. AMC common shares were down as much as 25% in the premarket session.

In a press release this morning, the company announced it would “raise $110 million of new equity capital through the sale of APE units to Antara Capital, LP (“Antara”) in two tranches at a weighted average price of $0.660 per share”.

The company then said it will have to “increase the authorized number of AMC common shares to permit the conversion of APE units into AMC common shares” and then it seeks permission to perform a 1:10 reverse split.

Heading on the express train to $0, it appears…

Adam Aron told the company’s shareholders in the press release:

“Clearly, the existence of APEs has been achieving exactly their intended purposes. They have let AMC raise much welcomed cash, reduce debt and in so doing deleverage our balance sheet and allow us to explore possible M&A activity. However, given the consistent trading discount that we are routinely seeing in the price of APE units compared to AMC common shares, we believe it is in the best interests of our shareholders for us to simplify our capital structure, thereby eliminating the discount that has been applied to the APE units in the market.”

In other words, they’ve been another great tool to help dilute common shareholders without making it obvious…

Aron concluded: “All should know that our liquidity position is now significantly enhanced, and our balance sheet is strengthened. We look forward to a growing industry box office in 2023 and beyond and also look forward to AMC continuing to benefit from our unique leadership position in the movie theatre industry.”