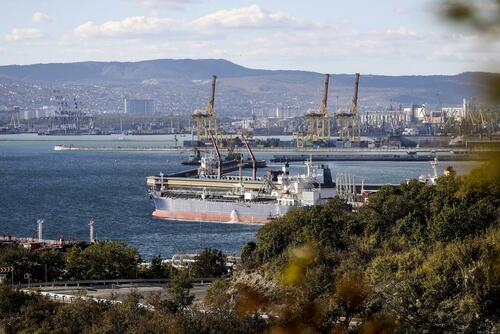 President Putin indicated Thursday that Russia’s long-awaited response to the G7 oil price cap will come next Monday or Tuesday, in a defiant message asserting there will be no losses for Russia’s economy due to the cap.

After long warning Europe its punitive anti-Moscow measures will backfire, he on Thursday repeated this theme that the price cap will trigger “a path toward destruction of global energy” – possibly sending prices to “sky-high” levels. “No individual damage for Russia, for the Russian economy, for the Russian fuel and energy sector is seen. We are selling approximately at prices set as the cap,” Putin said, according to a state media translation.

“The goal of our geopolitical opponents, adversaries is clear – to limit revenues of the Russian budget,” Putin continued, before asserting:

“We nevertheless lose nothing from this ceiling; there are no losses for the Russian fuel and energy sector and the economy, the budget.”

And he re-emphasized that there are “No losses because we are selling at these prices.”

Interestingly a Foreign Policy op-ed published on the same day by chairman of the Atlantic Council’s Global Energy Center, Richard Morningstar, seems to agree and admits the following…

“When Western leaders announced on Dec.2 that they had agreed on a $60 price cap on Russian oil exports they trumpeted it as a bold multinational achievement in energy diplomacy. But anyone who things this will be a significant hit to Russian oil revenues… is likely to be disappointed.”

And more: “After all, Russian oil has sold at prices in the $60 range for much of the last sevral years. Moreover, since Russia’s February invasion of Ukraine, global energy traders have already limited their offtake of Russian crude to some extent. When countires such as India and China snapped up the surplus, they negotiated steep discounts. But the discount for Urals crude, the main Russian benmark – nearly $40 per barrel compared with Brent oil in the early months of the war – has slowly dropped into the low $20 per barrel range, allowing Moscow to continue cashing in.”

In contrast, Ukraine still has high hopes of a very different outcome, naturally…

“We expect the collapse of profits from oil and gas exports to be at more than 50%, precisely because of the introduction of the EU embargo on oil and petroleum products and the introduction of price restrictions. Oil and gas account for 60% and 40% of federal budget revenues. We expect that Russia’s revenues will fall below the critical level of $40 billion per quarter,” Yuliya Svyrydenko, First Deputy Prime Minister and Minister of Economy of Ukraine has said, echoing the whole impetus and rationale behind the cap as creating conditions that make it much more difficult for the Russian military machine to continue functioning.

As for Putin, he the day prior also confidently said that his approach to the Ukraine special operation will remain one of “no limits” on spending. “The country and government is giving everything that the army asks for – everything. I trust that there will be an appropriate response and the results will be achieved,” Putin informed his top officials at the Defense Ministry’s annual meeting in Moscow.