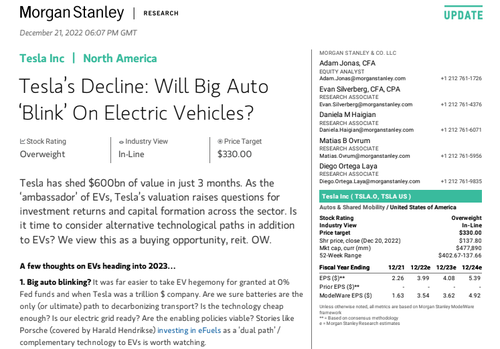 Just hours before today’s shellacking in shares of Tesla, Morgan Stanley looked as though they were starting to wave the white flag not just on the Elon Musk-led company, but on electric vehicles as a whole.

In a note released Wednesday called “Tesla’s Decline: Will Big Auto ‘Blink’ On Electric Vehicles?”, analysts led by Tesla sycophant Adam Jonas posed the question of whether or not it is “time to consider alternative technological paths in addition to EVs”.

The note can only be described as schizophrenic. In it, Jonas makes key arguments against Tesla and the industry, while noting the progress of Tesla’s competitors. Despite that, Jonas doesn’t change his overweight stance on the name.

Despite skepticism, the note – which was released just hours before Tesla would shed another 11% – says it views the sell off in shares of Tesla as a “buying opportunity” and perfunctorily reiterated an overweight rating on the name. Great work, guys.

Jonas first explored the impact of rising rates on the sector: “It was far easier to take EV hegemony for granted at 0% Fed funds and when Tesla was a trillion $ company. Are we sure batteries are the only (or ultimate) path to decarbonizing transport? Is the technology cheap enough? Is our electric grid ready? Are the enabling policies viable? Stories like Porsche (covered by Harald Hendrikse) investing in eFuels as a ‘dual path’ / complementary technology to EVs is worth watching.”

And another brick in the wall of Jonas’ bull case, quizzically, was that Tesla was likely going to continue discounting: “Tesla’s price cuts started in China and we expect them to quickly spread to Europe and the US. While circular in nature, lower EV prices are important for the next leg of mass adoption, but depress the returns of many of the companies expected to compete against Tesla.”

Jonas also seemed to allude to how he thought Ford was leading the industry on the shift to EV: “We believe Ford’s divisional re-organization may be an important moment for the industry in understanding the trade-offs of capital allocation and margin loss vs. terminal value preservation in legacy autos. While the intercompany transfer pricing and impact of government incentives may take a while to sift through, we expect a more open and balanced understanding of the risk/reward for EVs”.

He also looked at Toyota as a new formidable competitor in the space: “Akio Toyoda, leader of the world’s largest and highest valued legacy auto company, Toyota (covered by Shinji Kakiuchi), refers to the ‘silent majority’ of auto executives who question over-committing to EV strategies at the sacrifice of other decarbonizing technologies. The vocal majority of auto industry followers (this author included) had criticized Toyota’s resistance to keep up with EV launches from competitors. While Toyota will eventually achieve scale in EVs, the later/follower approach may prove optimal over time.”

He also believes managing cash burn is going to be crucial for the industry: “With respect to emerging (non-Tesla) EV startup strategy we believe ‘hunkering down’ to manage the pace of cash burn is a winning strategy. We anticipate more challenging capital markets environment may limit the number of EV players that can achieve sustainable scale.”

Finally, he comments that many large players in the industry will be forced to rejigger their spending plans and timelines now that the playing field has become saturated and rates have risen:

“Volkswagen (covered by Harald Hendrikse) spends its entire enterprise value in combined capex + R&D in just ~1 year. How long companies spend at this rate? In our view, it’s the capital not deployed that can frequently create the most value in auto stocks. In 2023, we think legacy automakers like GM and Ford have an opportunity to reconsider the quantum and timing of their EV investment plans last established during a very different economic and interest rate environment of 2020/2021.”