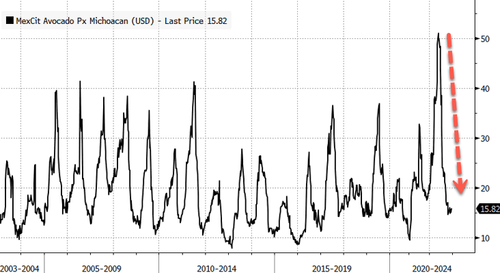 After surging to record highs in the first half of 2022, wholesale avocado prices crashed in late summer into fall time, just as the NFL season kicked off. Guacamole is the star player at any football party, and this season, there’s a sign of relief that avocado prices are back to affordable levels.

For a 20-pound box of avocados from the state of Michoacan, Mexico (the central hub of Mexican avocado production), prices jumped as high as $51 in May. Some main drivers in igniting prices to record highs were production woes and import issues at the border. Even during the Super Bowl in February, we pointed out Americans were paying some of the highest costs ever for the fruit.

Now Mexican wholesale avocado prices have collapsed from $51 to $16, or a 70% drop, because of oversupplied conditions in US markets.

“It’s one of those odd situations where this extreme oversupply of avocados is only possible because of a perfect storm of Black Swan events. For consumers, avocados right now are the green lining to the storm clouds of food inflation,” Richard Kottmeyer, managing director of food, agriculture and beverage with FTI Consulting, told CNN.

Kottmeyer said, “much of the avocado oversupply has wound up in US.” And the glut in avocados has pushed down supermarket prices and should extend well into the middle of 2023. 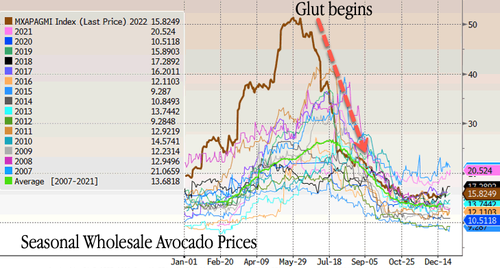 Sliding fruit prices from Mexico have put a dent in Mission Produce’s fiscal fourth quarter with a loss of $42 million or 59 cents a share, on net revenue of $238 million, flat with a year ago.

Bank of America said the company that sources, produces, packs, and distributes fresh avocados to supermarkets, wholesale, and food service customers across the world had a challenging quarter because “market prices of Avocados dropped while cost inflation remained high.”

Mission Produce shares plunged as much as 15% to $12.40 a share — nearly the level at which the company went public in late 2021 — after earnings were released on Thursday. 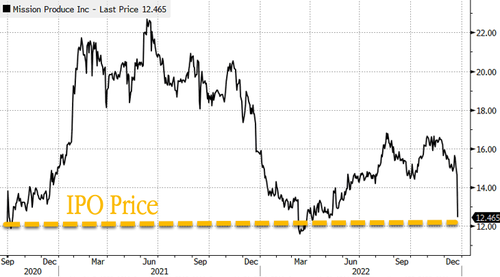 BofA is optimistic about Mission Produce’s future for the next fiscal year:

Looking ahead to FY23, avocado supplies appear to be more abundant which should support volumes and restore some normalcy to the market place. This should support improvement in EBITDA. A longer term question in our view is the scope that AVO (and the market) can pass through the more structural non-fruit related cost inflation as contracts renew, we expect to see some progress in FY23.

And the bank reiterates its Buy rating on the company with a $19 price target as fundamentals are forecasted to improve in the quarters ahead.

Demand for avocados is certainly not decreasing. There’s a supply wall that Americans will have to eat through — and we’re assuming cheap avocados will spur millennials back into the avocado and toast craze.

Looking ahead, we wonder if traders font-run Mission Produce shares ahead of the Super Bowl, which is the biggest consumption event for avocados.