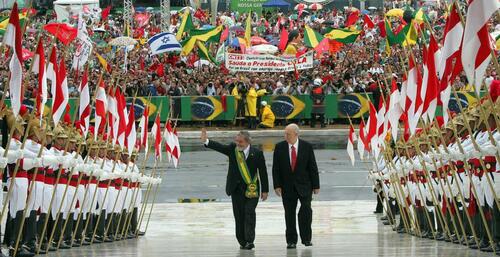 Brazilian President-elect Luiz Inácio Lula da Silva is set to be inaugurated on Sunday, weeks after a close upset victory over ultra-conservative incumbent Jair Bolsonaro in what was the most consequential election in Brazil in decades.

Bolsonaro’s supporters alleged widespread election fraud, leading to sporadic protests and clashes with police since October, which two weeks ago escalated into an attack on the headquarters of the federal police in Brasilia. Fierce protests urging an investigation into alleged election irregularities are still ongoing.

And over the weekend police foiled a bomb plot, reportedly intended to disrupt the Lula inauguration, and which is now driving fears that there could be an attack on the Sunday events in the capital which is expected to have a massive turnout.

The suspect now in custody has been identified as 54-year-old gas station manager George Washington de Oliveira Sousa. He has reportedly confessed to planting explosive devices not far from where Lula is staying.

The man arrested for being involved in a bombing attempt at Brasilia International Airport over the weekend said in a written statement to police that he intended to “create chaos” so a “siege state in the country” would be installed to prevent former President Luiz Inácio Lula da Silva from taking office again in January.

The media is blaming a group of “pro-Bolsonaro election deniers” and is making connections to Jan.6 in America.

“On December 24, Brasilia police said they had foiled a bomb plot, arresting a man with ties to a group of pro-Bolsonaro election deniers camped outside the army headquarters, who have been urging the military to overturn Lula’s victory,” Reuters reported Tuesday.

Following the bomb incident and arrest, which has dominated headlines since the weekend, federal police are reportedly taking extra security precautions to protect against some kind of potential ‘terror’ event.

Brazil’s incoming justice minister Flávio Dino has vowed on Twitter to implement measures that ensure everyone’s safety on inauguration day. “All procedures will be reassessed, with a view to strengthening security,” Dino aid. “And the fight against terrorists and rioters will be intensified. Democracy has won and will win.”

Brazil 🇧🇷 "Lula, thief, your place is in jail" chants the Brazilian Congress

The mood is better than at a soccer match. At the graduation ceremony of the elected Brazilian parliamentarians, chants and booing can be heard quite loud there "Lula, thief, your place is in prison. pic.twitter.com/bPb1f4TeOv

While Bolsonaro has not openly or explicitly contested that Lula will be next president, Bolsonaro himself has yet to publicly concede defeat to Lula. A late November attempt by Bolsonaro’s team to appeal to the courts while alleging a fraudulent election was immediately tossed out.