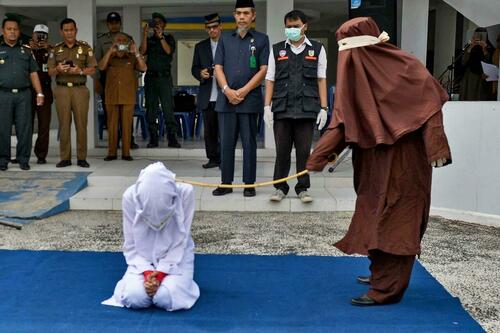 One of the biggest international relations stories of the 1990s which captured much of the American public’s attention at the time was the 1994 arrest of 19-year old Michael P. Fay in Singapore. He had been accused of vandalism, and confessed to spray-painting cars and was reportedly found with road signs in his possession, for which he received the harsh sentence of caning by a Singapore court. The caning with four strokes only took one minute, but left blood running down his back, and subsequently strained US-Singaporean relations.

Now another southeast Asian country is being spotlighted in Western media for its longstanding practice of flogging – or caning – as an accepted judicial sentence of corporal punishment, given it even has an all female flogging squad, which was formed almost three years ago. The all-women caning squad is tasked with meting out the punishment for female convicts as part of Indonesia’s strict Islamic Sharia law system.

A photo spread and on the ground report featured in Vice News includes women dressed in head to toe Islamic coverings, administering punishments in a setting that ironically enough looks straight out of the US television series The Handmaid’s Tale.

Typically a rattan cane no more than a half-inch thick is used for all judicial and prison floggings, which can be done for offensives ranging from drinking alcohol, adultery, having any sexual relations outside of marriage, homosexuality, or even being caught in “close proximity” with an ‘unauthorized’ member of the opposite sex.

Increasingly Indonesia’s only Shariah-regulated province of Aceh is coming under national as well as international attention and scrutiny for the practice, given that in some instances caning can be so brutal as to result in victims passing out, and skin being ripped off.

Vice in its report painted a portrait of the following eerie scene:

Officials—mostly men—from the Sharia police are gathered at Taman Sari, a popular public park at the heart of the city. Among the scant crowd is a group of college girls and photojournalists jostling to get the perfect shot. In the middle of the park’s arena, a woman cloaked in a white jilbab with her face covered with a mask, is seated on her knees on a carpet. She’s accused of a crime that wouldn’t even be considered a crime anywhere else in Indonesia: meeting a man who is not her husband.

Local authorities claim that female floggers were needed given that crimes committed by women were on the rise. “In official data shared by Sharia police with VICE World News, crimes against morality, such as unmarried men and women caught together, have seen a steep drop in 2021 as compared to 2018,” the Vice report reads.

Last week (or perhaps the Middle Ages): Public caning in Banda Aceh, Indonesia. The woman collapsed and fainted as she received 17 floggings of a rattan cane. There are cheering crowds at such public punishments.

“For instance, khalwat or when an unmarried man and woman are in a secluded place together, was reported 90 times in 2018. In 2021, that number was down to 8. The Sharia police attribute this to flogging. Activists disagree,” Vice continues.

The hardline province and its police have long been subject of investigations by external human rights groups, given the ‘morality police’ have been documented actively seeking out ‘criminal behavior’ or public displays of vice – however, activities which the vast majority of countries and societies in the world would consider normal everyday things, such as simply a man and woman sitting together in a public park.

Apparently, some among the eight women floggers employed by the province were quite eager to quit their professional careers and conduct physical punishments:

Mariam, Aceh’s first woman flogger, wanted to become a lawyer but joined the Sharia police instead in 2006 and then was appointed by the prosecutor to become a woman flogger in 2018. “I never thought of becoming a flogger but when this regulation was made, I was ready for it,” the mother of four children told VICE World News.

Despite that regional authorities claim equal justice and objectivity in how flogging is carried out, the report recounts the following shocking episode from years prior to the women floggers being established: “In 2014, the Sharia police flogged a 25-year-old woman for adultery even though she was handed over to them by vigilantes who gangraped her and doused her with sewage water.” And much more recently: “Early this year, a woman was flogged 100 times for adultery while the man involved, who denied the accusations, received just 15 lashes.”

European media outlets have over many years documented the abuses of Aceh’s morality police:

Their punishment? Brutal public caning. Revisit one of our most-watched videos this year.

Concerning this year’s incident involving 100 lashes, Amnesty International Indonesia described, “The fact that the woman had already collapsed once and was still forced to undergo more flogging shows a complete lack of compassion and care for her well-being and health.” The statement continued: “Both the use of flogging as a punishment and the criminalization of sexual relations outside marriage are clear violations of international human rights law.”