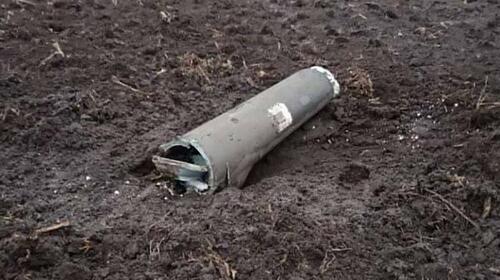 Within the initial hours after Belarusian authorities released photographs of what appears to be a downed Ukrainian S-300 missile in a field in the Brest region not far from the Ukrainian border, few details were given in state media. Belarusian President Alexander Lukashenko had been “immediately informed,” according to reports, while state-run BelTA news agency indicated two possibilities of either an errant Ukrainian anti-air missile having strayed across the border and into the field, or else the projectile was shot down by Belarusian defense units.

Belarus’ military now says its anti-air systems intercepted the missile as it entered over sovereign territory. “The Defense Ministry said that air defense units shot down an aerial target at about 10 o’clock in the morning on 29 December,” BelTA reports.

“Pieces of the missile were found in a crop field in the vicinity of the village of Gorbakha, Ivanovo District, Brest Oblast. A preliminary examination revealed that the pieces had been part of an S-300 air defense guided missile fired from Ukraine’s territory,” the state outlet continued.

The downed missile was found close to the village of Harbacha, about 10 miles from the border with Ukraine.

An earlier statement from the defense ministry suggested “the missile flew into Belarus’ territory similarly to a recent incident in Poland.” An investigation is said to be ongoing, while Minsk has summoned the Ukrainian ambassador to demand an explanation.

“The Belarussian side views this incident as extremely serious,” Belarusian spokesman Anatoly Glaz said in a press statement

“We demanded that the Ukrainian side conduct a thorough investigation,… hold those responsible to account and take comprehensive measures to prevent the recurrence of such incidents in the future.”

🇺🇦🚀🇧🇾The Ministry of Defense of Belarus showed how a Ukrainian S-300 missile was identified and shot down after crossing the border. pic.twitter.com/YR5URmBN19

A Ukrainian military spokesman confirmed it was indeed a Ukrainian stray, however while downplaying the whole incident, calling it “nothing strange, a result of air defense” and acknowledging that it “has happened more than once.”

Tensions between Belarus and Ukraine have continued to be on edge, given reports this month that suggested the Belarusian military is preparing to directly support Russian troops in Ukraine. This hasn’t happened yet in any noticeable large-scale way, but in the opening war Lukashenko allowed his territory as a staging ground for Russian forces under the guise of “training exercises”.