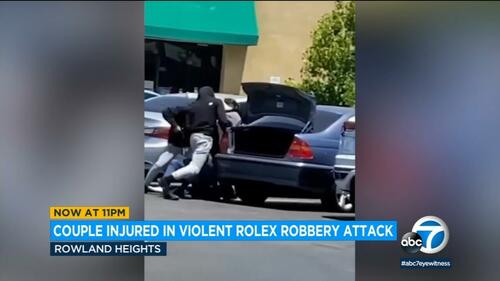 Timepiece aficionados are leaving their Rolex, Patek, Audemars Piguet, and other expensive watches at home as they attempt to stay under criminals’ radar while in public. From Los Angeles to Manhattan to London to Paris, violent high-end watch robberies are rising.

“I outright stopped wearing it [stainless steel Rolex Submariner] on the subway.

“I don’t want to draw attention to myself in that way” amid the spate of subway crimes, New York City resident Troy Barmore told NYTimes in August.

While watch theft statistics are limited in major metro areas, authorities across the US and Europe have warned about a wave of criminals targeting affluent people for their timepieces.

“This is a top priority for us, and we have already made a number of arrests.

“No one should have to go about their day in fear of thieves,” said London Detective Chief Superintendent Owain Richards.

Police data in London shows 667 Rolex watches were stolen from people between January and September, up from 60 over the same period last year. The average value of watches stolen in the English capital exceeded 10,000 pounds this summer. 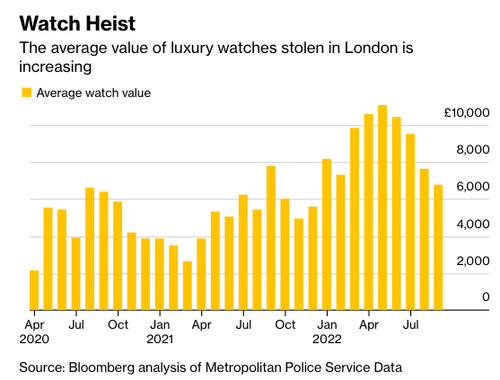 Watch owners insure their timepieces, but that’s the least of their worries because they could become victims of a violent robbery. Some who sport these watches have taken them off and placed them in winder boxes.

And back to the US, Los Angeles County Sheriff’s Department said 206 thefts involving at least one watch valued at $5,000 or more occurred between Jan. 1 through mid-November. That’s a 30% increase over the same period last year.

Organized crime gangs have been mainly on the prowl, scoping out wealthy folks, either at their homes or in public, waiting to pounce and steal expensive jewelry. These thefts are also happening at home.

“We are definitely seeing examples of robberies and thefts of luxury watches taking place across North America,” Tannie Ng, a senior underwriter for luxury collections at Chubb Ltd., said in an interview.

With that in mind, it’s safer to wear less expensive and or no jewelry at all. And for those who want to wear fancy jewelry despite the risks, well, wearing body armor and or legally concealing a weapon could be your best shot at survival as the western world plummets into a crime-infested liberal utopia.