FTX Founder Reportedly Cashes Out $684K After Being Released On Bail 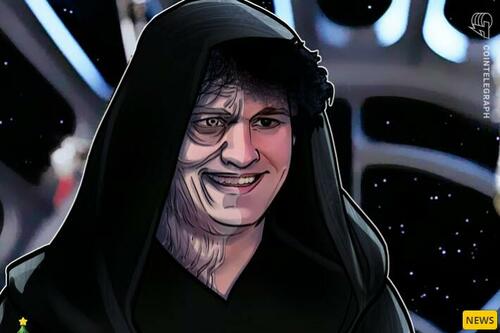 Authored by Helen Partz via CoinTelegraph.com,

SBF has allegedly cashed out $684,000 from a crypto exchange in Seychelles while being under house arrest, according to an on-chain investigation…

SBF has cashed out $684,000 in crypto to an exchange in Seychelles while being under house arrest, according to the on-chain investigation by DeFi educator BowTiedIguana.

Decentralized finance (DeFi) analyst BowTiedIguana took to Twitter on Dec. 29 to report on a series of obfuscated wallet transactions allegedly linked to SBF, suggesting that the former FTX CEO could have violated release conditions to not spend more than $1,000 without permission from the court.

According to BowTiedIguana’s analysis, SBF’s public address (0xD5758) on Dec. 28 sent all remaining Ether to a newly created address (0x7386d). BowTiedIguana noted that SBF took over the address that was originally owned by Sushiswap creator from Chef Nomi in August 2020.

When SBF agreed to take over control of the Sushiswap exchange from anonymous founder Chef Nomi in August 2020, he asked for ownership to be transferred to his Ethereum addresshttps://t.co/nE9z9tLd2n pic.twitter.com/vask9WqSHd

Within hours, 0x7386d received transfers totaling $367,000 from 32 addresses identified as Alameda Research wallets, with an additional $322,000 coming from other wallets. All funds were sent to a centralized crypto exchange in Seychelles and to the crypto bridge RenBridge, according to the DeFi analyst.

0x7386d sent a total of 519.5 Ether, or around $629,000, to 0x64e9B, which also received funds from addresses labeled as Alameda Research. BowTiedIguana also identified five separate transactions of less than 51 ETH ($61,000) that were used to move funds to newly created wallets and then “onwards to a Seychelles-based exchange.”

“As the Ethereum blockchain is an immutable public ledger, this on-chain evidence is permanently available to law enforcement and the courts,” BowTiedIguana stated, calling attorneys from the United States Securities and Exchange Commission to look at the issue.

Confirmed to be related to SBF or not, the transactions do not necessarily mean that FTX founder has violated bail release conditions, according to some industry enthusiasts.

“I don’t know that this necessarily qualifies as ‘spending’ money. They’re his assets already,” one industry observer suggested.

A number of online commenters also speculated that SBF himself was Chef Nomi, the anonymous co-founder of Sushiswap. Coinbase head of strategy Conor Grogan stressed that many of the recent SBF-linked transactions were heavily related to early Sushiswap activity. “These wallets — assuming they all belong to him — were heavily involved with LPing Sushi early on, well before Chef Nomi handed off the project to SBF,” Grogan stated.

SBF himself claimed in September 2020 that he didn’t have anything to do with building Sushiswap.

The alleged SBF-linked transactions occurred about a week after SBF was granted bail with a $250 million bond secured by SBF’s parents paid with the equity in their house. SBF previously claimed that he only had $100,000 in his bank account after the collapse of FTX.

The news comes soon after the government of Bahamas officially announced that local authorities seized $3.5 billion worth of crypto from FTX on Nov. 12. The authorities claimed that the action was taken in order to avoid a risk of “imminent dissipation” of funds after SBF warned about cyberattacks on FTX in mid-November.