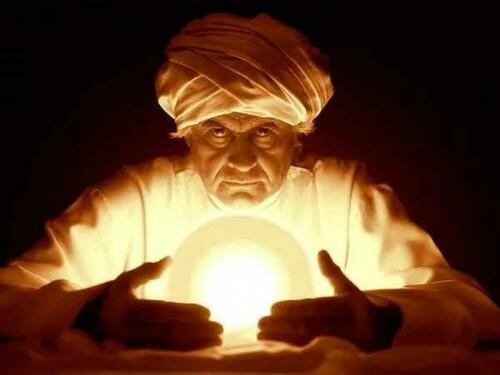 The question that should be on our minds is: how are my household’s buffers holding up?

Lists of predictions for the new year are reliably popular. Here’s 10 predictions, there’s 17 predictions, over here we have 23 and a half… let’s strip it all down to one prediction: everyone’s predictions will be wrong because 2023 isn’t going to follow anyone’s script.

There are several reasons for this. One is that the vast majority of predictions are based on historical comparisons to previous eras. If the current era is unique in its combination of dynamics and instability, previous pathways are not going to accurately predict what happens next.

Recency bias leads us astray. The past 50 years of relatively mild weather, the past 40 years of Bull Markets, the past 30 years of financialization and the supremacy of monetary policy–all of these offer a warm and fuzzy confidence that the future will be comfortingly similar to the recent past. This assumption works pretty well in stable eras but fails dismally in destabilizing, transitional eras.

Those who happen to be living inside an island of coherence are inside a bubble that they mistakenly think encompasses the entire world. This is especially prevalent in the top 5% who shape the narratives that influence the rest of us. If real estate is sinking in their little corner of the world, they predict real estate will crash everywhere.

If everything’s rosy in their protected enclave, they predict a mild recession and steady growth, blah blah blah.

Those living in a place that has lost its coherence and stability see the world differently. Systems are breaking down and when they are restored, they’re not the same: they’re less reliable, more expensive and prone to decay / decoherence.

This tracks the core-periphery model I often reference. Those in the still-coherent core cherry-pick evidence that all is well in the decohering periphery while those in the periphery expect the rot to spread quickly to the core.

It depends on how much is left in the buffers protecting core systems. As the diagram below illustrates, a system’s ability to bounce back (restore stability and function) depends on the robustness of its buffers: how much labor, capital, expertise, spare parts, etc. can be rushed into service to repair damage and restore functionality.

The quality and quantity of these buffers are invisible to outsiders. When staffing has eroded and there’s no one available to call up, when spare parts have been depleted, when budget constraints, corruption and managerial incompetence have stripped the system of expertise and the willingness to sacrifice, the system breaks down and cannot be restored because the means to do so are no longer available.

Outsiders clinging to recency bias are thus shocked when systems they assumed were rock-solid no longer function reliably. Insiders are amazed the duct-tape has held this long while outsiders are stunned to learn that student nurses are being passed off as certified nurses and the maintenance of critical systems has completely collapsed.

As I explained in How Things Fall Apart, The Blowback from Stripmining Labor for 45 Years Is Just Beginning and The “Let It Rot” Death Spiral, the competent are leaving in droves, leaving the ambitiously incompetent at the wheel while those keeping the whole mess glued together are burning out and retiring, quitting or downsizing to gigs with less pressure and more control of their work. 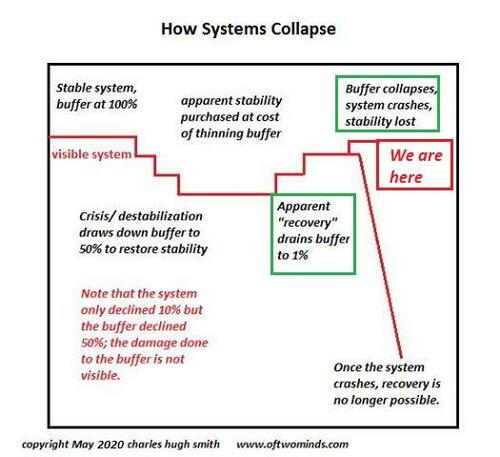 This process is uneven and unpredictable. In some cases, the core will shield itself from the decay and breakdown in the periphery, in other cases the falling dominoes will destabilize the core that everyone in the bubble thought was permanently safe and secure.

The question that should be on our minds is: how are my household’s buffers holding up? What resources do we have in reserve when systems lose their reliability and predictability?

Counting on the demi-gods in central banks to save us is not a substitute for strengthening your own buffers. There’s no substitute for owning and controlling everything that counts in your life, and developing trusted personal networks of reliable, trustworthy, productive people. Those are the foundations of self-reliance.

Become a $1/month patron of my work via patreon.com.