One Great Big Nasty Prediction For 2023 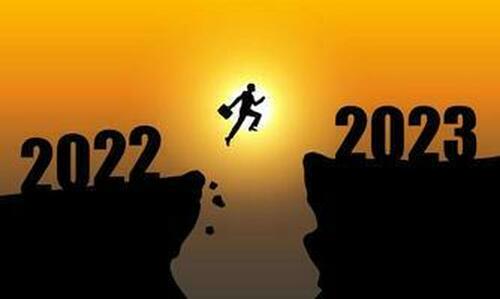 Authored by MN Gordon via EconomicPrism.com,

The New Year’s edition of the Economic Prism is a place of wild conjecture and rough suppositions.  A place where abstract thinking is celebrated.  Imaginative cycle theories, deep metaphysics, fractal wave patterns, happy accidents, and amateur fortune tellers of all stripes are invited too.

Today, with perfect 20/20 vision, we set our sights on the year ahead.  After all, the New Year’s here.  What better time than now to peer out 12 months through our proprietary prism and report back what we see?

On the periphery, we find new dreams, new directions, and new delusions, swirling about like storm clouds interspersed with warm radiant light.  We see opportunities and contretemps.  We see doom and despair.  And we also see hope and redemption.

But what else?  What are the essential insights you should take along as you set out to make another pass around the sun?

What does the New Year have slated for stocks, the 10-Year Treasury note, gold, oil, bitcoin, and everything else?  Will junk bonds be roiled by massive corporate defaults?

Will there be a painful inflation flareup?  Will Sam Bankman-Fried mysteriously perish?  What about Maxine Waters…will she croak too?

Will there be riots in your city?  Will the power grid meltdown?  Will California finally dry up and blow away?  Will your social credit score be tarnished for not recycling your food waste?

Are we fated for complete societal breakdown?  Will 2023 culminate in the second coming of Jesus?

The questions are limitless.  The answers are exponentially limitless.

To clarify, our predictive methodology is rudimentary.  We eschew popular forecasting techniques – including trend lines, relative strength and/or stochastic oscillators, and other data driven models – for a conjectural approach.

We look to our sixth sense and developed intuition for guidance and pragmatic guesses.

But before we begin, we pause to ask: “What say you, dear reader?”

You likely have opinions on these matters.  Most people do, even your dense uncle can reckon a thing or two.  Without a doubt, the answers to these questions will be revealed in due course.  Some before you die.  Some after.

In the meantime, our advice is to keep it simple and trust your gut.  Many gurus don’t know what they’re talking about.  So, believe in yourself.  For your guesses are better than most.

Besides, after a demoralizing 2022, and with Karine Jean-Pierre as White House Press Secretary, anything and everything can happen in 2023 – including World War III!

Thus, we’re abstaining from a broad range of predictions for the 12 months before us.  But not to worry, we won’t leave you empty handed.

Rather, with humility and modesty our intensive research has brought us to one critical – yet overlooked – event that will come to pass in 2023.  Our claim is bold and of ultimate importance.  Because it will drive the outcome of just about everything else.

By way of full disclosure, our primary conjecture is not unique or unknown.  In fact, many can sense what’s coming.  But like when confronted with the presence of a war veteran with missing limbs, nearly all look the other way.  The horrors are too grave to contemplate.

Not today, however.  Free of charge, and with the sole intent of separating you from the common herd, we’re considering something nasty and unpleasant.  Yet it’s something that will come to pass in 2023, nonetheless.

We’ll tell you all about it in just a moment.  But first, some context is needed…

To be perfectly frank, if you haven’t already come to this conclusion on your own, WWIII started on February 24, 2022, when Russia invaded Ukraine.  Many Americans remain incapable of comprehending this.

Right or wrong, for 20 years NATO goaded Russia through progressive eastward expansion towards Russia’s border.  An aggressive reaction was bound to happen.

If you recall, the U.S. and its NATO allies quickly responded with a ‘sanctions war’ against Russia, and an actual shooting war using the Ukrainians as proxies.  The initial centerpieces of the massive sanctions included cutting Russian financial institutions off from SWIFT and preventing the Bank of Russia from using its foreign currency reserves.  Orders to ‘freeze and seize’ the assets of Russian oligarchs soon followed.

But Putin had his own countermeasures ready.  To stabilize the ruble, the Bank of Russia offered to buy gold from Russian banks at a fixed price of 5,000 rubles per gram, thus linking the ruble to gold.  This quickly limited the ruble’s devaluation in terms of U.S. dollars because gold trades in dollars.

By linking the ruble to gold and then linking energy payments to the ruble, the Bank of Russia and Putin fundamentally altered the entire rulebook of the global trade system.  They also accelerated change in the global monetary system.

Since 1971, the global reserve status of the U.S. dollar has been underpinned by oil.  The petrodollar era has remained in place because of the world’s continued use of U.S. dollars to trade oil and the U.S. government’s – and the U.S. military’s – ability to prevent any competitor to the dollar.  Might makes right.

On September 26, 2022, a series of secret bombings disrupted the flow of gas through the Nord Stream pipelines between Russia and Germany via the Baltic Sea.  Who done it?

We may never know.

At this point, sanctions have been much less effective at deterring Putin than Javelins and Stingers.  Still, do you follow the wisdom of sending an additional $45 billion to Ukraine along with Patriot missile defense systems?

Alas, if you must ask the question, the fine line has already been crossed.

With this context behind us, let’s turn to the year ahead.  What is the big – yet overlooked – event that will come to pass in 2023?

One Great Big Nasty Prediction for 2023

He emerged from the party congress with a historic third five-year term as general secretary of the Chinese Communist Party (CCP) and chairman of the Central Military Commission.

This outcome lifted Xi into the exalted air of Mao Zedong.  He’s ‘emperor for life.’  The event also underscored the CCP’s position that Taiwan unification is “a natural requirement for realizing the rejuvenation of the Chinese nation.”  Xi and the CCP view Taiwan as Mao’s unfinished business.

On Christmas day, not long after Santa Claus traversed the globe, China sent 71 fighter jets and seven ships near Taiwan.  Many of these fighter jets crossed the median line of the Taiwan Strait.  The Taiwanese military counted 47 jets breaching the de facto boundary line.

The casus belli, in this instance, was President Biden signing the 2023 National Defense Authorization Act, which includes $10 billion in military assistance to Taiwan.  A similar reaction was triggered over the summer following a visit to Taiwan from House Speaker Nancy Pelosi.

About the same time as Pelosi’s visit, simulated war games of a Chinese invasion of Taiwan were conducted at the Center for Strategic and International Studies.  The results were grim for both China and the U.S.

Certainly, an invasion of Taiwan across the Taiwan Strait by China’s People’s Liberation Army (PLA) seems improbable.  But so did Russian tanks rolling across the border into Ukraine, until just moments before it happened.

Why, just why, is China stockpiling such massive amounts of commodities?

At the same time, U.S. sanctions on Russia had the unintended consequence of compelling China and Russia into strategic cooperation.  All year Russia has been selling oil to China in exchange for yuan.

In addition, Xi recently met in Saudi Arabia with Crown Prince Mohammed bin Salman and other Gulf Arab leaders.  In a direct challenge to the petrodollar, Xi remarked that China would work to buy oil and gas from Arab nations in yuan.

What to make of all this?

Economic warfare is being waged.  The geopolitical stage is being set for the next stage of WWIII in the Pacific Theatre.

With all modesty, and full acknowledgement of the limitations of abstract thinking, that’s our one great big nasty prediction for the New Year.  Expect the unexpected.  China will invade Taiwan.

This will put a torch to all other predictions for 2023.

As detailed above, one should expect the unexpected to come in 2023.  We don’t like it.  But we intend to exploit it.  What’s more, paid up Wealth Prism Letter subscribers will discover exactly how in the January issue, due to be published in the early hours of January 2.  If you’d like to exploit this opportunity too, take action and subscribe today!  Have a blessed 2023!