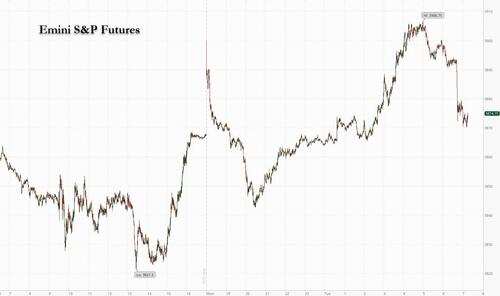 US stock futures rose on the first trading day of 2023, with some of the most beaten down and shorted stocks and sectors outperforming, as optimism crept – however briefly – into the market on the one-year anniversary of the S&P 500’s last record high.  Contracts on the S&P 500 climbed as much as 1.1% before fading much of their earlier gains. One year ago, the S&P closed at 4,796.56: since Jan. 3, 2022, the US stock benchmark endured its biggest annual decline since the global financial crisis, ending the year down 19%. Nasdaq 100 futures rose 0.6% Tuesday. The dollar jumped as the euro tumbled, while Treasuries were headed for their strongest start to a year in more than two decades as investors scooped up government debt on wagers the Federal Reserve will further slow its pace of rate hikes.

Stocks that were among last year’s worst performers rise in the first US premarket trading session of the new year, with riskier names like meme stocks, cryptocurrency-related shares and electric- vehicle makers gaining amid a return in risk appetite and renewed optimism over China’s reopening. However, not all beaten down names jumped: Tesla fell 3.8% after the electric-car maker delivered fewer vehicles than expected. Analysts noted that the company is facing significant demand issues as it ramps up production capacity and offers hefty incentives in of its two biggest markets. Here are some other notable premarket movers:

Stocks are set to gain at the open despite concern that the Fed’s interest rate increases will cause the economy to slow significantly in 2023, if not contract. The Big Short Michael Burry said on Twitter late Sunday that the US this year is likely to be “in recession by any definition”, in other words, Powell will be able to declare mission accomplished. Optimists are counting on inflation to slowly cool even as the labor market remains strong. Some pressure eased in the final months of 2022 as Fed officials pointed to a less-aggressive tightening path, while China’s exit from its Zero Covid policy also helped sentiment.

“The Fed has pushed up rates well into restrictive levels and has signaled a willingness to go further,” said Rajeev De Mello, a global macro portfolio manager at GAMA Asset Management, who’s cautious on US stocks. “I would become more comfortable with US equities when we are closer to a pause. Even after the 2022 decline, some US equities still trade at high valuations.”

“Hopes that supply chain issues in China will continue to ease, which could help bring down inflation, may be feeding into sentiment,” said Susannah Streeter, senior investment and markets analyst at Hargreaves Lansdown. Traders are “seizing onto glimmers of hope that once the winter waves die down, China’s recovery could be back on track.”

In Europe the Stoxx 50 rallied as much as 1.4% before fading some gains after a surprise drop in German unemployment signaled resilience in the region’s biggest economy; FTSE 100 outperforms, higher by 1.5% on the day. Travel and leisure and tech stocks led gains while defensive sectors including utilities and telecoms underperformed. Here are some of the biggest European movers:

Earlier in the session, Asian stocks erased an initial decline, spurred by a rebound in Chinese equities as traders assessed peaks in China’s Covid-19 infections and the outlook for the economy.  The MSCI Asia Pacific ex-Japan Index was 0.2% higher, reversing a drop of as much as 1.5% and poised for a third straight daily gain. Chinese stocks listed in Hong Kong had their best start to a year since 2018 as subway use recovered in nearly a dozen major cities.  A decline earlier in the day in Chinese stocks was triggered by weak manufacturing for December as well as tourism data for the New Year holiday.

“While it is inevitable to see further surges and more widespread infections at the initial stage of opening, the outlook for the Chinese economy has brightened for 2023,” Saxo Capital Markets strategists wrote in a note. China’s renewed support for private enterprise and the property sector, and an improved credit impulse mean “Hong Kong and mainland Chinese equities have a more positive tendency,” they added. Korea’s Kospi gauge fell to a two-month low as local funds sold tech stocks such as Samsung amid worries about the earnings outlook. Japan and New Zealand were closed for a holiday.  After a dismal 19% slide in 2022, strategists are expecting the MSCI Asia Pacific Index to outperform US peers this year with a stronger rebound in the second half. China’s full reopening, a pivot in Fed policy and an end to the chip downcycle are among the positive catalysts seen to outweigh a slowdown in global growth.

Indian stocks rose for a second straight session, helped by gains in lenders after most banks reported strong growth in credit offtake for the previous month. Gains in local shares tracked most Asian peers, with Chinese equities rallying as traders assess the outlook for economic recovery on signs of Covid peaking in some cities.  The S&P BSE Sensex rose 0.2% to 61,294.20 in Mumbai, while the NSE Nifty 50 Index was higher by a similar measure. Fifteen out of BSE Ltd.’s 20 sector sub-indexes advanced, led by consumer durables makers.  Axis Bank and HDFC Bank were the key gainers among Sensex’s 30 companies, 17 of which ended higher, while the rest declined. Tata Consultancy Services led the gains in software companies.  Reliance Industries fell after the Indian government revised windfall tax on domestic crude and diesel exports higher.

In Australia, the S&P/ASX 200 index fell 1.3% to close at 6,946.20, its lowest since Nov. 7. All sectors dropped on the benchmark’s first trading day of the year, with banks and miners contributing the most to its decline. In New Zealand, the market was closed for a holiday.

In FX, the Bloomberg dollar spot index rallied by as much as 0.9% as the greenback strengthened against all Group-of-10 peers save the Japanese yen. The JPY is the only G-10 currency that’s up against the dollar. NZD and AUD underperform. The yen briefly reversed gains against the dollar in early European trading before resuming its advance; the Japanese currency advanced to a six-month high in the Asian session after an initial bout of stop-loss selling through a key technical level was followed by momentum buying against the dollar and euro. Front-end volatility in the majors is better bid as the new year kicks off, with the yen being at the forefront of traders’ attention. The euro fell by as much as 1.3% to a three-week low of 1.0534 following some weaker than expected German inflation prints. The Australian and New Zealand dollars flipped to gains amid signs that Covid cases in major Chinese cities may have peaked. Positive comments toward Americans from China’s Foreign Minister Qin Gang also lifted risk sentiment

In rates, Treasuries traded sharply higher, outperforming core European rates with yields as much as 11bp richer on the day across intermediates vs Friday’s closing levels. US 10-year yields around 3.765%, richer by 11bp on the day and outperforming bunds and gilts by 6bp and 3bp; belly-led gains richen 2s5s30s Treasuries fly by 4.2bp vs Friday’s close while 2s10s curve flattens ~4bp. Gilts and Treasuries yields across the curve decline, led by the 10-year yields, each down about 13bps. Comparative bunds underperform, declining some 8bps.  There is no fresh catalyst for the first trading day of the year, as investors look to fade current rate-hike premium priced into front-end. In Europe, Treasury and bund curves bull-flattened while money markets eased Fed and ECB tightening wagers after German regional inflation figures signaled slowing inflation. Fed-dated swaps price Fed peak rate at around 4.95% by June meeting, down from 4.98% at Friday’s close.

In commodities, oil declined under pressure from a stronger dollar, reversing earlier gains. European gas prices slid as a warmer-than-expected start to winter across large parts of the world rapidly have eased fears of a natural gas crisis. Most base metals trade in the green. Spot gold rises roughly $12 to trade near $1,836/oz.

In crypto, bitcoin traded flat, just below $17K. Sam Bankman-Fried is expected on Tuesday to enter a plea of not guilty to criminal charges that he cheated investors and looted billions of dollars at his now-bankrupt FTX cryptocurrency exchange, according to a source cited by Reuters.

A more detailed look at global markets courtesy of Newsquawk

Stocks in Asia were a mixed bag (Japan and New Zealand are away from market). ASX (-1.3%) is the laggard whilst Chinese bourses are on a firmer footing (Shanghai Comp +0.8%, Hang Seng +2.1%). Weekend developments focused around China’s NBS PMIs, with the official NBS manufacturing PMI dropping to 47.0 (exp. 48.0) in December from 48.0 in November, the largest monthly decline since the start of the pandemic in February 2020, and remaining below the neutral 50-mark for the third consecutive month. Reuters notes that the data gives the first glimpse of the manufacturing sector after China removed its COVID restrictions in early December. Meanwhile, the Caixin version of the manufacturing PMI declined to 49.0 in December (exp. 48.8, prev. 49.4). EU Health Commissioner Kyriakides has reportedly contacted China offering variant-adapted EU vaccine donations alongside public health expertise, via FT citing sources which add China has not responded yet. IMF chief Georgieva said one-third of the global economy will be hit by recession this year, and 2023 will likely be tougher for the world economy than the previous 12 months.

European bourses are firmer across the board, Euro Stoxx 50 +1.4%, as the region’s strong start to 2023 continues. Post-APAC individual developments have been somewhat limited and primarily focused on Chinese PMIs and USD action. Stateside, futures are firmer across the board with the ES back above 3900 ahead of the week’s risk events from Wednesday onwards. TikTok owner ByteDance has cut hundreds of jobs at multiple departments in China, according to SCMP sources; the job reductions came after the CEO told employees in December that the company needs to ‘get fit and beef up the muscle’ to streamline operations.