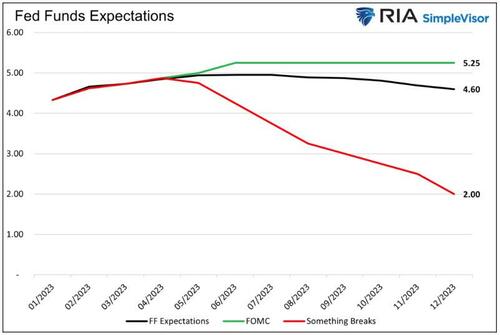 Authored by Michael Lebowitz via RealInvestmentAdvice.com,

As we anticipate what 2023 might have in store for investors, we must first consider what the Fed may or may not do. We think there are three potential paths the Fed might follow in 2023. The three paths determine the level of overnight interest rates and, more importantly, liquidity for the financial markets. Liquidity has a heavy influence on stock returns.

Let’s examine the three paths and consider what they might mean for stock prices.

The graph below compares the three most probable paths for Fed Funds in 2023. The green line tracks the Federal Reserve’s guidance for the Fed Funds rate. The black line charts investor projections as implied by Fed Funds futures. Lastly, the “something breaks” alternative in red is based on prior easing cycles.

To provide investors transparency into Fed members’ economic and policy outlooks, the Fed publishes a summary of each voting member’s economic and Fed Funds expectations for the next few years. The latest quarterly guidance on the Fed Funds rate, as shown below, is from December 14, 2022 (LINK). 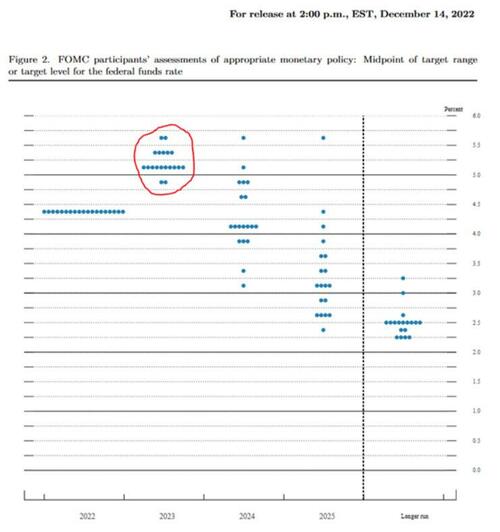 The dots represent where each member expects the Fed Funds rate to be in the future.

While investors place a lot of weight on the Fed projections, it’s worth reminding you they do not have a crystal ball. For evidence, we only need to look back a year ago to its 2022 projections from December 2021. 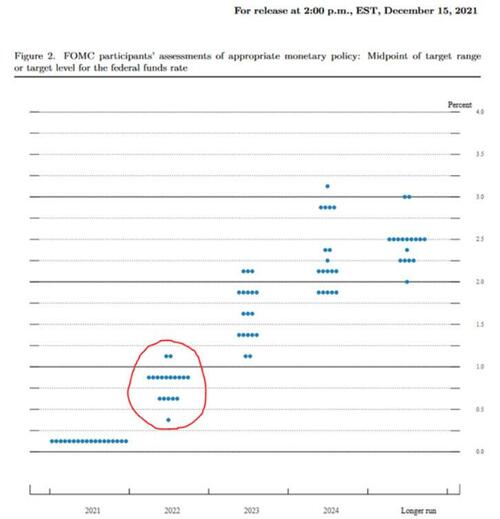 Their misguided transitory inflation forecast grossly underestimated inflation’s lasting power and how much they would have to raise rates. The point of sharing the graph is not to belittle the Fed but to highlight its poor ability to predict the future.

Fed Funds futures are monthly contracts traded on the CME. Each contract price denotes what the collective market implies the daily Fed Funds rate will average each month. For example, when writing the article, the June 2023 contract traded at 95.05. 100 less 95.05 produces an implied rate of 4.95%. We can arrive at an implied path for Fed Funds by stringing the monthly implied rates together.

The market thinks the Fed will raise rates to just shy of 5% in May and hold them there through July. After that, the market implies increasing odds of a Fed pivot. By December, the market believes the Fed will have cut interest rates by about 40bps.

Like the Fed, the Fed Funds market can also be a poor predictor of Fed Funds.

In late 2019 we wrote an article studying how well the Fed Funds futures market predicts Fed rate hikes and cuts. Per Investors are Grossly Underestimating the Fed:

As shown in the graphs, the market underestimated the Fed’s intent to raise and lower rates every time it changed monetary policy meaningfully. The dotted lines highlight that the market has underestimated rate cuts by 1% on average, but at times during the last three rate-cutting cycles, market expectations were short by over 2%. 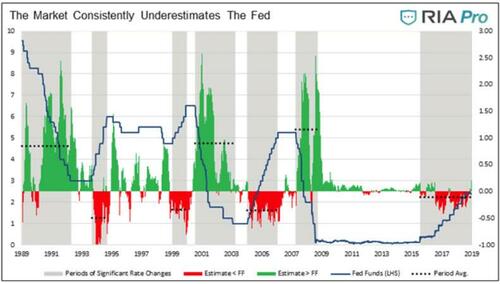 During the last three recessions, excluding the brief downturn in 2020, the Fed Funds market misjudged how far Fed Funds would fall by roughly 2.5%. Implied Fed Funds of 4.6% today may be 2% by December if the market similarly underestimates the Fed and the economic and financial environment.

The first two alternatives assume the Fed will tread lightly, be it raising rates a little more or a slight pivot in 2023. The third path is the outlier “something breaks” forecast.

There is a significant lag between when the Fed raises rates and when the effect is fully felt. Economists believe the lag can take between nine months and, at times, over a year. In March 2022, the Fed raised rates by 25bps from zero percent. Since then, they have increased rates by an additional 4%. If the lag is a year, the first interest rate hike will not be fully absorbed into the economy until March 2023.

The third path, in which the Fed aggressively lowers rates, would be a response to a significantly weakening economy, inflation falling much more rapidly than expected, or financial instability. It could also be a combination of any or all three factors.

In The Foghorn is Blowing, we discuss how an inverted Treasury yield curve that un-inverts has been a great predictor of recessions, stock market drawdowns, and corporate earnings declines. The re-steepening of the yield curve is almost always the result of the Fed lowering interest rates.

The yield curve is currently inverted to a level not seen in over 40 years. It will un-invert; the only question is when and how quickly. As we wrote: If it un-inverts as violently as it has in the past, the 2% Fed Funds for the year-end scenario may prove too high!

Asset Performance in The Three Paths

Stock investors expect the second path with a slight pivot during the summer. Currently, corporate earnings are expected to grow by 8% in 2023. Such implies economic growth. Therefore, it also intones the Fed will not over-tighten and cause a recession. This goldilocks scenario may provide investors with a positive return.

The first alternative, the FOMC’s expected path, may entail more pain for stock investors as it implies rates will rise higher than market expectations with no pivot in sight.

The third “something breaks” scenario is the potential nightmare scenario. While investors will receive the pivot they have been desperately seeking, they will not like it. Historically, rapidly declining economic activity and financial instability do not bode well for stocks, even if the Fed adopts a more accommodative policy stance.

The graph below shows that the yield curve steepens well before the market bottoms. Likely, the steepening will result from the Fed quickly slashing interest rates in response to “something breaking.” 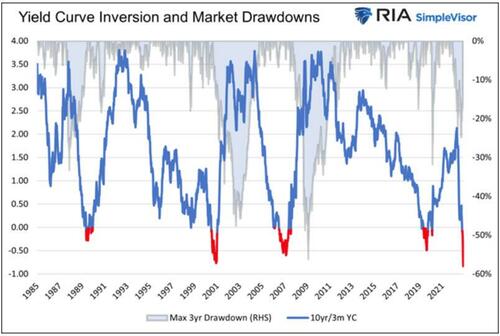 Another Fed policy facet to consider is QT. The Fed is removing liquidity at a sizeable clip. Like interest rates, QT has a lag effect. In time, economic and financial market liquidity diminishes with QT.

Even if the Fed stops raising rates or marginally lowers them, QT will present headwinds for stock prices.

The unprecedented influx of liquidity that drove asset prices higher in 2020 and 2021 is quickly leaving the market. The lag effect of higher interest rates and fading liquidity will likely play a prominent role in determining stock prices in 2023.

Based on the Fed’s determination to quash inflation via higher interest rates and QT, we think the “something breaks” scenario is the likely path ahead.

World renown investor Stanley Druckenmiller seems to agree with us per a recent quote- “I would be stunned if we didn’t have a recession in 2023.”

Given the dynamic nature of economic and financial market activity and the difficulty of predicting the economic future, the Fed’s projections and the other two paths we discuss should be monitored closely throughout the year.

Expect the unexpected in 2023 and keep the Fed’s path top of mind.