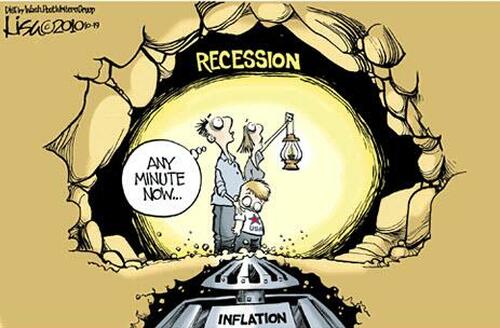 “Sometimes the stock market is quite investment-oriented, and other times it’s almost totally a casino, a gambling parlor — and that existed to an extraordinary degree in the last couple of years, encouraged by Wall Street.”

What is the Fed really thinking? They will probably er on the side of lower rates to avoid recession, running the risk of entrenched wage growth. Soft landings are the stuff of myth! How it effects the global economy is critical.

Everyone was focused on Tesla’s 12% stock price plunge  on the back of falling orders, but did you notice Apple’s market cap fell below $2 trillion – exactly one year after it briefly touched $3 trillion? Ouch. Of course, the travails of a few of yesterday’s stock market darlings is just the normal cut and thrust of markets… In a few years time… where will they be then?

Stocks come and go. Nations and the Bond Market remain…

What is the US Federal Reserve really thinking? We got more clues yesterday. Does the US Central Bank aggressively hike interest rates to crush inflation and risk recession? Or, do they slow the pace of interest rate rises to lessen recession but risking the overheated US jobs market pushing up wage inflation? Soft landings are very, very rare! As I’ve said before: a good landing is one you walk away from. An excellent landing is when you can still fly the plane the next day…

In reality, it’s a choice between the Devil or the deep blue sea. The temptation facing Jay Powell and his colleagues will be to do less with interest rates – in the hope that wage inflation pressures will naturally moderate, and slower rate rises will avoid triggering recession. But, as we all know, hope is never a good strategy!

Already a significant number of struggling emerging economies are functionally bust – crushed by high debt, food and energy prices, covid slowdowns, commodities, and the mighty dollar as much as endemic corruption and inefficiencies. The higher the dollar goes, the more difficult the situation becomes.

Many economists now predict a period of dollar weakness as rates rise around the globe, and US inflation falls. The charts show the dollar has moderated since Nov – hence emerging markets should benefit and why so many year-end strategic reviews have EM down as an investment theme for 2023. 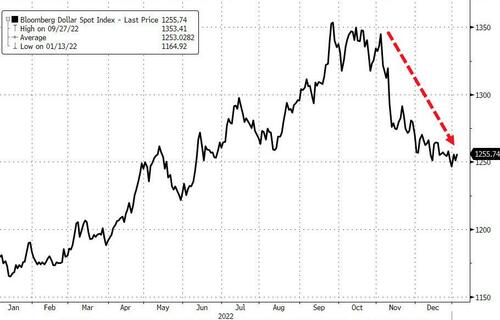 If only it were so simple.

The bottom line for most heavily indebted nations is a desperate need to attract investment and avoid damaging debt – meaning don’t borrow in dollars! The Virtuous Sovereign Trinity theory holds good for all nations: if they have political competency (controlling corruption and ensuring sound governance), have sustainable access to debt/bond markets, and a sound currency, then the outlook is good. Break out of these norms and you become Sri-Lanka, or worse.

The big concern for the future is just how wobbly an emerging market crisis resulting from unaddressed inflation/recession could be? I read a poll recently – although I read it with some scepticism – that the number one concern of UK voters is illegal immigration. At present swarms of Albanian economic migrants are apparently leaching off the UK state regarding the inflatable dinghy across the Channel as an expensive bus-fare, justifying sending any and all refugees to Rwanda. As policies go, it’s proving about as effective as any other promise the government makes…. If nothing else, it gives us a pantomime villain to rail against.

The issue becomes truly serious if/when an inflation/food/energy/climate crisis across North Africa and wider triggers something bigger in terms of a genuine refugee crisis into Europe. That would be yet another test for European unity with substantial costs and human misery all round – making the current sustainability of European debt troubling in the extreme.

Speaking of third world nations, the situation in the UK is fascinating – the deeply unpopular government means striking public sector workers are attracting considerable sympathy for what is rapidly becoming a national shutdown in pursuit of inflation busting pay-demands. It feels like the whole country is broken. The hospitals are bursting, offices are empty, everyone has hacking coughs and its misery on misery squared out there. Cheer up… the sales are underway, but no one has any money left to spend.

As a I commented yesterday, the UK feels a single slip away from a complete financial market meltdown.

Wage inflation looks nailed on. While no one will ever criticise the nurses, support for public sector workers is not unlimited. Most UK government workers will retire on gold-plated final salary pensions, rising at the rate of inflation. I managed a modest uplift in my self-managed pension pot last year – but inflation means I’m actually down 3%!

Railway men are not badly paid – but I can’t get to work this week due to the Rail Strikes. The rail unions argue it’s all about safety – the employers want to create a leaner more cost efficient structure. The fact the whole rail system of Notwork Rail (the track operator) and multiple train operating companies is an illustration of the very worst way to set up a railway is a good argument for renationalising the whole thing and starting from scratch!

I am hoping some direction for the UK economy will shortly emerge – at the moment it feels like we are floating on an ocean of failure… We need change..

Finally, I am tempted to comment on the failure of the US Republican’s to elect Kevin McCarthy as Speaker of the House. The fact the opposition in the USA now looks vaguely less competent than Jeremy Corbyn’s Labour should be a matter of deep concern. The problem in the UK is as much about the failure of a decent opposition these past 12 years of Conservative Government (it would have kept them focused and honest), as it is about the crass opportunism of the Cameron/May/Boris/Truss/Sunak etc etc years.