How Long Is Compulsory Military Service Around The World? 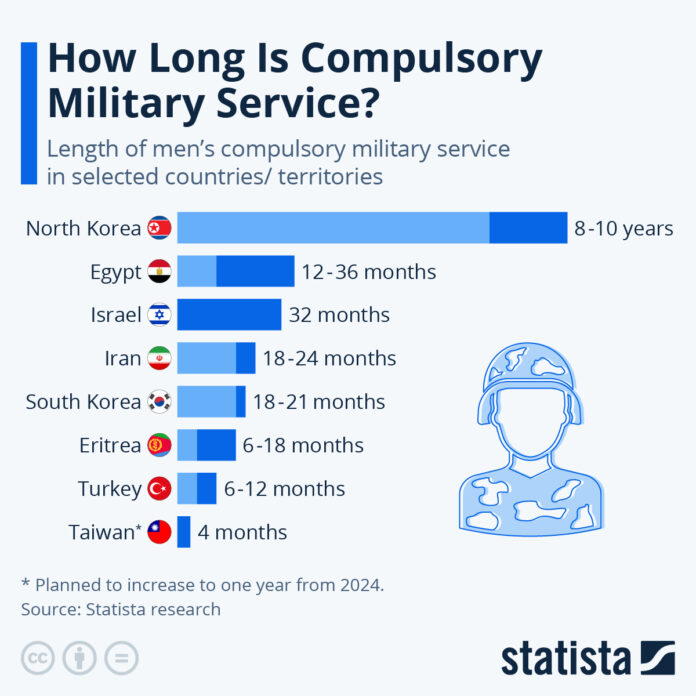 Taiwan is extending its mandatory military service in 2024 from four months to one year, as tensions continue to rise with China.

Taiwanese President Tsai Ing-wen announced early last week that conscription will include more intense training so that the country is better equipped should China invade. Conscripts will also receive a higher monthly stipend, increasing from NT$6,500 (US$211) to NT$26,307 (US$856), which is roughly akin to minimum wage. In a poll conducted by the Taiwanese Public Opinion Foundation in December, 73 percent of respondents supported the move.

But among those that do, four months is a relatively short period of time. Taiwan had originally stipulated two years of service, however this was gradually cut down to four months as of 2013, with the intention of relying more heavily on volunteer forces instead.

As Statista’s Anna Fleck shows in the chart below, North Korea stands at the other end of the spectrum in terms of duration, although media reports vary. The Guardian reported 10 years for men and 7 for women as of 2015, while the Indian Express puts the figures closer to 8 years for men and 5 for women. According to media reports, those in the elite class are usually able to avoid conscription. 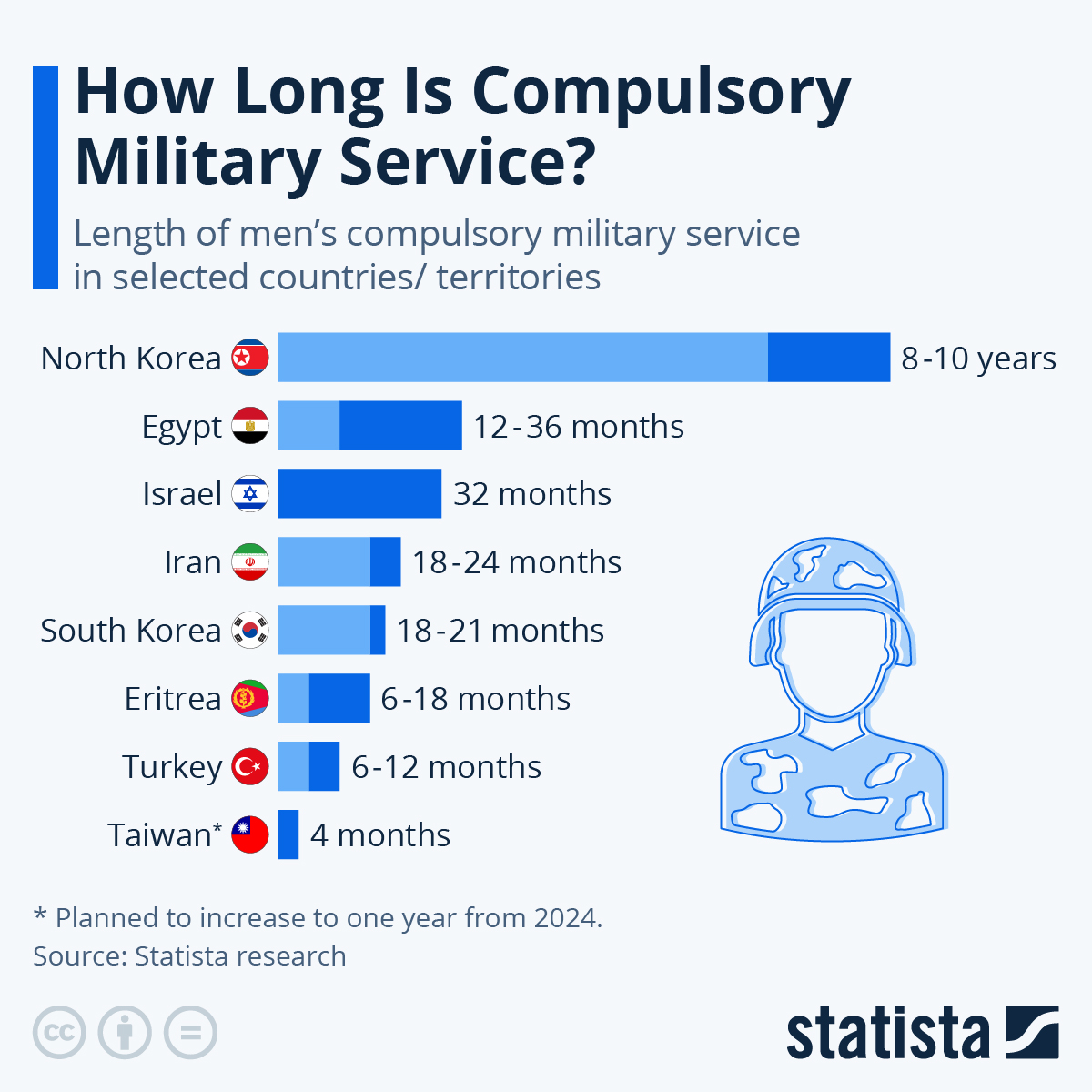 Israel too has a fairly long and rigorous conscription, albeit far shorter than North Korea. Most Israeli men over the age of 18 who are Jewish, Druze or Circassian must serve in the Israel Defense Forces for 32 months and women for 24 months, according to the IDF. Meanwhile, in Egypt, conscription is compulsory for men aged between 18 and 30 for up to 36 months. As with several countries on the chart, service can be pushed back until students finish their studies and there are a number of clauses that exempt men from joining the forces, for example, if they are the only son/sole breadwinner of the family.

South Korea, which is technically still at war with North Korea, also has mandatory conscription for all able-bodied men for a period of 18 months to 21 months, depending on the posting. Some athletes and classical artists are allowed to postpone or forgo the draft entirely. The K-Pop group BTS brought the issue to light recently, with debate over whether they could be excused from service. The decision was made that men can delay their military draft until the age of 28 and those working in the entertainment industry are now allowed to postpone their service until they turn 30. The oldest member of BTS, Jin, has now started his mandatory draft.

There’s huge variation in the rules for how long citizens must join the military in the countries that still have mandatory conscription as well as possible reasons for exemptions. For instance, in Turkey, new laws introduced in 2019 decreed that instead of the mandatory six months of military training, conscripts could do one month and buy-out the remaining five months for a fee of 31,000 Turkish Lira ($1,651), according to the Australian Government’s Department of Foreign Affairs and Trade. Conscripts’ levels of higher education can also impact the type and length of their post.

Punishments for not enlisting vary too. In Eritrea, anyone evading or attempting to evade compulsory military service could face imprisonment of one to three years. According to DFAT, this could increase to 7-10 years imprisonment in a time of emergency or war.

While most countries with conscription only draft men, a handful of countries including North Korea, Israel, Norway, Sweden, Eritrea and Mozambique conscript women too.