Will Powell Spoil The Party? Levels To Watch This Week 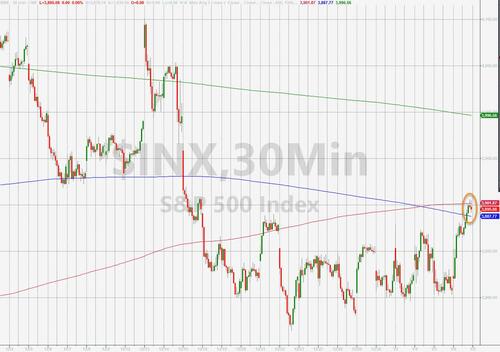 The S&P 500 closed right at its 50- and 100-day moving averages on Friday after an epic meltup following ‘mixed’ jobs data and a dovish response driven by an explosion in options-day-trading volumes.

Friday’s boost was 0 DTE (days to expiration) call options activity. As SpotGamma explained on Twitter, north of 1 million calls traded with ~60% of those tied to today’s expiration.

It was call buying that was most prevalent – dealers had likely sold calls and bought underlying to hedge – which was the added bullish kicker to IV falling. Once that activity expired, though, as it did at the end of the day, it does little to create the context for a far-reaching rally. 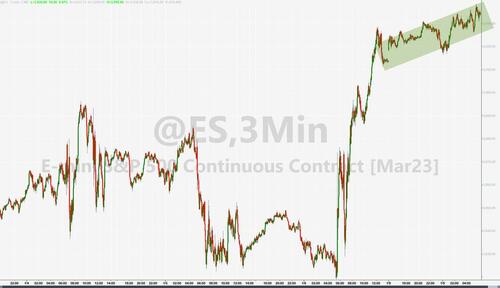 The question now is what happens next?

With Powell speaking tomorrow morning and CPI later in the week, there’s plenty of event risk.

As SpotGamma notes, the fact that we do not see a shift higher in the SPY Call Wall (390) despite the ~2% rally on Friday suggests that longer term options traders were not aggressively positioning.

SpotGamma thinks the cleanest thing to do here is to look at some longer dated calls.

We are bullish on a close over 3900 as there is little resistance until 4000.

The trick here is Powell at 9AM ET tomorrow, which may inhibit bullish activity today as traders await his remarks.

It’s a guessing game as to how the market will react to Powell tomorrow, however we believe that given a dovish angle there could be a strong rally with little resistance until 4000-4050.

This presents a nice risk/reward, particularly if IV holds up into a rally due to a long call chase (i.e. VIX up, market up).

There is room for a sharp rally in January overall, as there is a large, put-heavy (in SPY/SPX/QQQ) 1/20 expiration that can provide rally fuel. The expiration is currently more put/call neutral for single stocks as a whole. Additionally, demand for downside new protection is very low, suggesting little fear in markets.