China’s easing of border restrictions imposed almost three years ago has been a recent boon for air travel, domestically and internationally. There are no more mandatory quarantines for travelers arriving in China.

BloombergNEF said jet fuel demand is rising in China ahead of the holidays. They noted that scheduled passenger flights for Jan 10 to 16 indicate jet fuel demand has reached about 0.61 million barrels per day (mbpd), rising 0.10 mbpd compared with a week earlier. Then by next week, jet fuel demand could increase to 0.72 mbpd. This would mark the highest demand for Chinese jet fuel in more than 1.5 years. 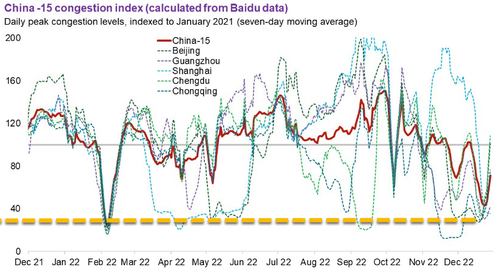 Another sign China’s oil demand is rebounding is a massive quota for crude imports by refiners. Traders with direct knowledge of the matter told Bloomberg that quotas for this year are already 132 million tons, compared to 109 million tons of crude oil import as of this time last year.

China’s reopening is driving fuel demand growth and could steadily rise after the Covid infection wave wanes in the next few months.

Early on Tuesday, Brent Crude prices hovered around $80 per barrel. “I think oil will go upwards of $140 a barrel once Asia fully reopens, assuming there will be no more lockdowns,” he said, adding that the “market is underestimating the scale of the demand boost that it will bring.”

Andurand tweeted a startling analog of what could be next for crude prices. Also, Carsten Fritsch, commodity analyst at Commerzbank, told clients this week that her team is “confident that oil prices will climb again once the current wave of COVID infections has peaked in China and economic activity picks up.”

And all of this begs the question of whether a China reopening could mark a bottom for the energy complex. There’s still a risk a central bank-induced global recession is possible. The World Bank warned Tuesday recession threats were mounting.