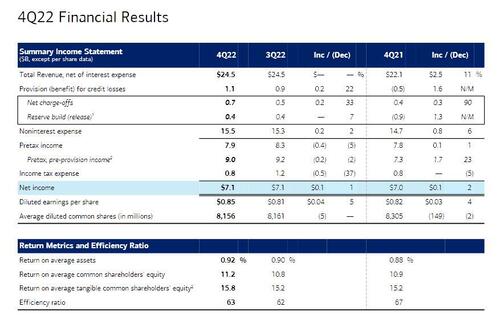 While traditionally it is JPMorgan that is the first bank to report earnings in the quarter, today – by a margin of about 2 minutes, it was Bank of America which moments ago reported earnings that were generally stronger than expected.

Here are the highlights for the just concluded Q4:

BofA’s net charge-offs (NCOs) of $689MM increased compared to 4Q21 and 3Q22 but has remained below pre-pandemic levels (for now). Adding it up, the bank reported a reserve build of $403MM vs. release of $851MM in 4Q21; and a build of $378MM in 3Q 22. The reserve build was “primarily driven by loan growth and a dampened macroeconomic outlook.” Finally, the allowance for loan and lease losses of $12.7B represented 1.22% of total loans and leases;  the total allowance of $14.2B included $1.5B for unfunded commitments. 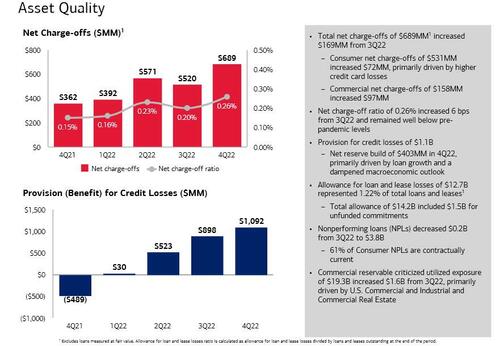 Digging deeper into the numbers we find:

Net interest income (NII) of $14.7B ($14.8B FTE) increased $3.3B, or 29% but was not enough to beat estimate of $14.95BN, driven by benefits from higher interest rates, including lower premium amortization expense, and loan growth

Also according to BofA, as of December 31, 2022, a +100 bps parallel shift in the interest rate yield curve is estimated to benefit net interest income by $3.8B over the next 12 months 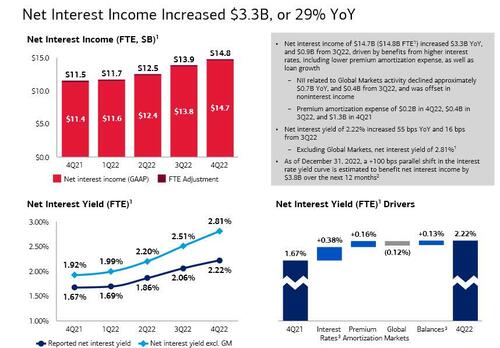 Turning to noninterest income, BofA reported $9.9BN of revenue which decreased $0.8B, or 8%, as declines in investment banking and asset management fees, as well as lower service charges, which offset higher sales and trading revenue.

Next, a quick look at the balance sheet shows that: 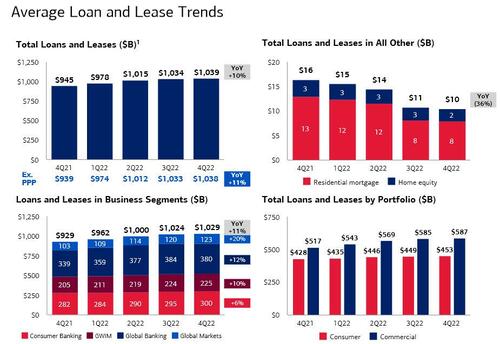 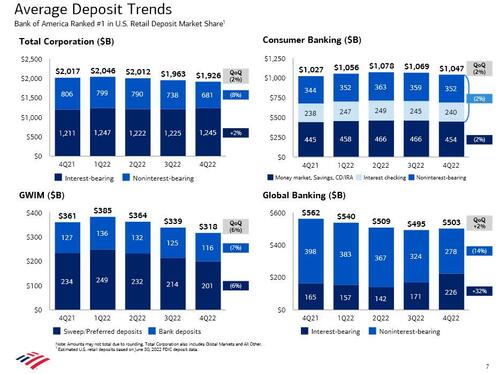 Turning to the bank’s investment bank and trading operations, the bank reported results that were generally stronger than expected, to wit:

Noninterest expense of $3.2B increased 10% vs. 4Q21, driven by higher activity-related expenses and investments in the business, including technology and strategic hiring. 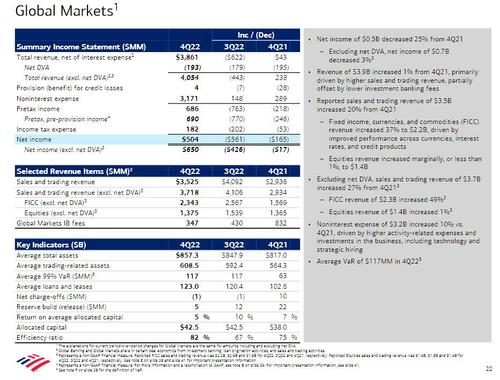 Finally, turning to the bank’s Global Banking division, investment banking revenue $1.07 billion dropped 54% from $2.351BN a year ago, and was just below the estimate of $1.08 billion

Some more details on the group: 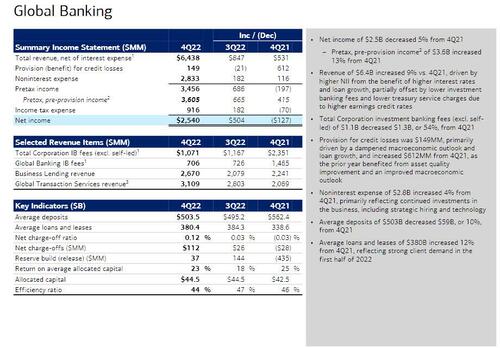 A quick look at the bank’s Global wealth and investment management shows that AUM balances of $1.4 trillion declined $237 billion; $21 billion of AUM flows since Q4-21. GWIM Net income of $1.2B decreased 2% from 4Q21;  Pretax, pre-provision income of $1.6B increased 4% from 4Q21; Record fourth-quarter revenue of $5.4B increased marginally compared to 4Q21, as higher NII was mostly offset by the impact of lower market valuations on noninterest income. 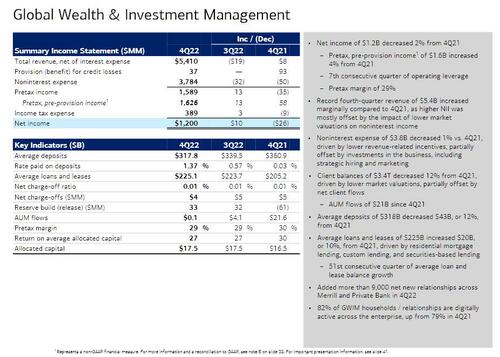 Commenting on the quarter, CEO Moynihan said that “we ended the year on a strong note growing earnings year over year in the 4th quarter in an increasingly slowing economic environment.” He also said that earnings “represent one of the best years ever for the bank, reflecting our long-term focus on client relationships and our responsible growth strategy. We believe we are well positioned as we begin 2023 to deliver for our clients, shareholders and the communities we serve.”

CFO Alastair Borthwick chimed in, saying that the said $3.3BN increase y/y in net interest income was largely passed along “to the benefit of shareholders” and added that “Prudent management of capital in the quarter helped us to grow loans, buy back shares and increase our capital buffer on top of our regulatory requirements.”

Despite the solid earnings and the beat across the board, BofA stock dipped in premarket trading perhaps dragged down by the far uglier results at JPMorgan (we will discuss those next). 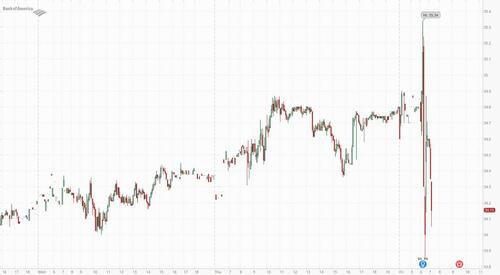 The company’s full Q4 earnings deck is below (pdf link)