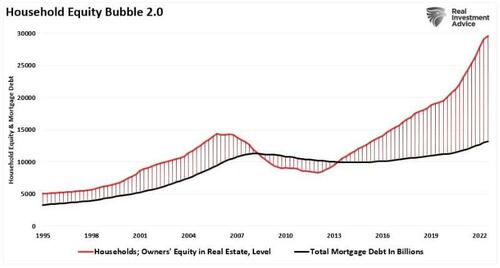 Home prices have started to correct as interest rates rose sharply in 2022. However, the real problem for home prices is still coming in 2023 as the standoff between sellers and buyers comes to a head.

However, before we get there, let’s review how we got here.

Since the turn of the century, there have been two housing bubbles, with home prices reaching levels of unaffordability not previously seen in the United States. Such was, of course, due to lax lending policies and artificially low-interest rates luring financially unstable individuals into buying homes they could not afford. Such is easily seen in the chart below, which shows home equity versus mortgage debt. (Home equity is the difference between home prices and the underlying debt.)

The current surge in home prices makes the previous bubble in 2008 look quaint by comparison.

At that previous peak in 2007, the equity in people’s homes was around $15 trillion, while mortgage debt stood at $9 trillion. When the bubble popped, home prices collapsed, flipping homeowner’s equity from positive to negative. Home equity is roughly $30 trillion, while mortgage debts have increased to roughly $12 trillion. That is an incredible spread, unlike anything seen previously.

However, this time, the surge in home prices wasn’t due to a surge in lax underwriting by mortgage companies but rather the infusion of capital directly to households following the COVID-19 pandemic-driven shutdown. 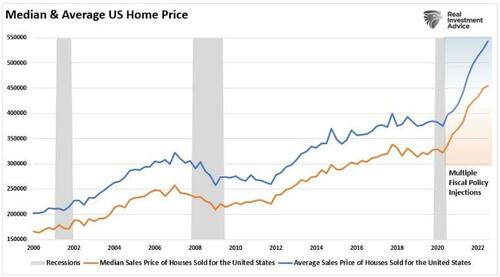 Of course, many young Millennials took that money and jumped into the home-buying frenzy. In many cases, buying sight unseen or willing to pay way over the asking price (thereby inflating home prices.) To wit:

“More and more millennials are sinking huge sums of money into homes they’ve never actually set foot in. While the sharp increase in sight-unseen buying in 2020 was certainly driven by pandemic restrictions, the phenomenon appears to be here to stay, due to the tech-forward nature of millennials and the competitive nature of the housing market.” – Insider Business

Of course, the rush to buy a home, and overpaying for it, led to regret.

“The number-one reason for buyer’s remorse: 30% of respondents said they spent too much money. The second most common regret was rushing the home-buying process, with 30% saying their purchase decision was rushed and 26% indicating they bought too quickly.” – CNBC

Unfortunately, there will be less demand as the massive flood of money into the housing market from Government stimulus reverses.

The problem with much of the mainstream analysis is that it is based on the transactional side of housing. Such only represents what is happening at the “margin.” Rather, the few people actively trying to buy or sell a home impact the data presented monthly.

To understand “housing,” we must analyze the “housing market” as a whole rather than what is happening at the fringes. For this analysis, we can use the data published by the U.S. Census Bureau.

To present some context for the following analysis, we must first have some basis from which to work. Our baseline for this analysis will be the number of total housing units, which, as of Q3-2021, was 143,613,000 units. The chart below shows the historical progression of the number of housing units in the United States compared to the total number of households and an estimate of the total potential households of buyers over the age of 25. For the estimate, we dividend the total active population over the age of 25 by 1.5 to account for single buyers and couples, who tend to make up the majority. 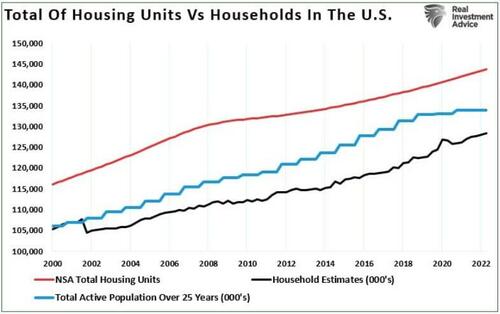 Not surprisingly, there are currently more houses than households to buy. Such is because several homes are vacant for different reasons, second homes, vacation homes, etc. Such is why, as we wrote previously, there isno such thing as a housing shortage.To wit:

“There are three primary issues that lead to changes in the supply of housing:“

“When those occur, transactions slow down, and inventory rises sharply.”

Not surprisingly, since that article was written in November 2020, just 2-years later, the supply of homes has risen sharply. Such is often a leading indicator of recessionary onsets as well. 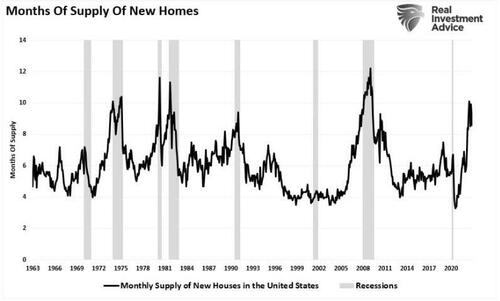 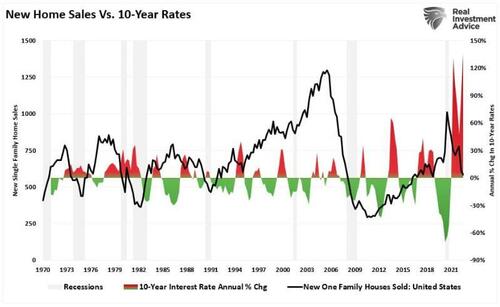 Another drag on prices in the new year will continue to be inventory coming to market as existing homeowners also try to sell their homes. More inventory and few buyers will equate to a further price drop in the coming year. 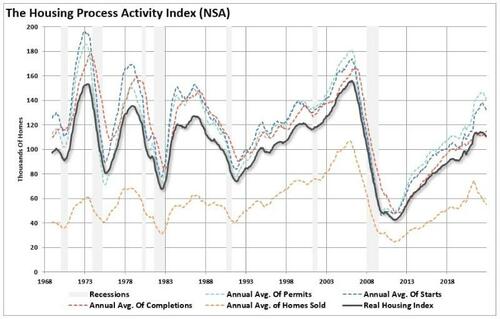 The chart below is the most telling of why home prices will fall further in the coming year. It is a composite index of everything involved in housing activity. It compiles new and existing home sales, permits, and housing starts. The index was rebased to 100 in 1999. The runup in the activity index into 2007 was a function, as noted above, of lax lending policies that led to the collapse in activity in 2008. 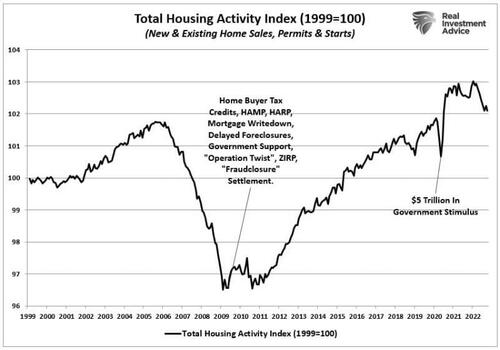 Following the collapse in 2008, the Fed dropped rates to zero and launched multiple QE programs as the Government bailed out everything that moved. The increase in housing activity over the next decade was unsurprising, and repeated monetary interventions boosted the wealth effect.

However, the sharp jump in housing activity in 2020 resulted from the direct monetary injections into households.

The reversion in home prices that has begun will likely continue as that excess liquidity continues to leave the economic system. That drain of liquidity, coupled with higher interest rates, and less monetary accommodation, will drag home prices lower. As that occurs, the “home equity” that many new buyers had in their homes will dissipate as homeownership costs continue to rise due to higher rates and inflation.

As home price depreciation gains traction, more homeowners will be dragged into selling to retain what value they had. For many Americans, most of their net worth is tied up in the homesteads. As the value fades, the decision to sell becomes more of a panic rather than a need.

While there isn’t a vast wasteland of bad mortgages sitting on the books, as seen in 2008, that doesn’t negate the risk of further home price declines in the coming year.

Not only are further home price declines possible, but it is also probable they could be deeper than many currently expect.