Visualizing The Biggest Global Risks Of 2023 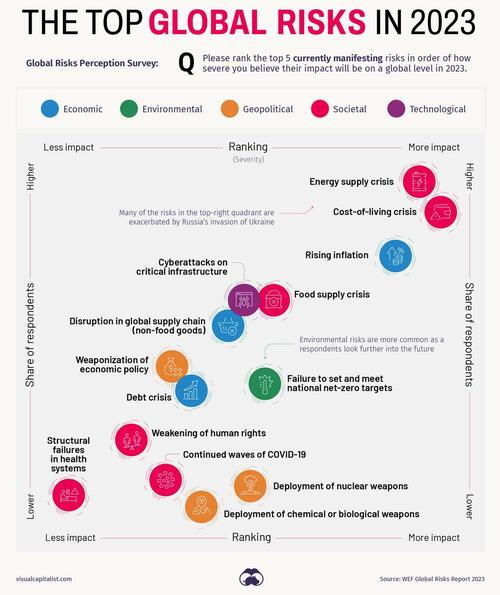 The profile of risks facing the world is evolving constantly. Events like last year’s invasion of Ukraine can send shockwaves through the system, radically shifting perceptions of what the biggest risks facing humanity are.

Visual Capitalist’s Nick Routley created the graphic below to summarize findings from the Global Risks Report, an annual publication produced by the World Economic Forum (WEF).

It provides an overview of the most pressing global risks that the world is facing, as identified by experts and decision-makers.

Let’s dive into this year’s findings.

In the lower–middle portion of the chart are the risks that could have serious impacts—such as attacks involving nuclear or biological weapons—but that were highlighted by fewer experts.

Over in the top-right quadrant of the chart are the risks that a number of experts mentioned, and that are causing a strain on society. Not surprisingly, the top risks are related to issues that impact a wide variety of people, such as the rising cost of living and inflation. When staples like food and energy become more expensive, this can fuel unrest and political instability—particularly in countries that already had simmering discontent. WEF points out that increases in fuel prices alone led to protests in an estimated 92 countries.

One risk worth watching is geoeconomic confrontation, which includes sanctions, trade wars, investment screening, and other actions that have the intent of weakening the countries on the receiving end. Efforts to mitigate this risk result in some of the key themes we see for the coming year. One example is the onshoring of industries, and “friend-shoring”, which is essentially moving operations to a foreign country that has more stable relations with one’s home country.

How Prepared Are We?

It’s one thing to be aware of risks, but it’s quite another to have the ability to head off negative events when they come to fruition.

The chart below is a look at how prepared we are globally to deal with specific types of risks that could arise in the next few years. 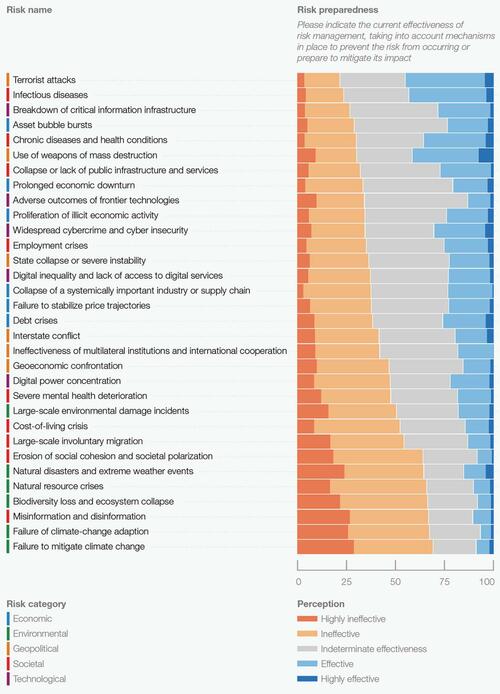 Experts are generally more confident in solutions in the military or healthcare domains. Environmental and societal challenges leave policy and decision-makers less confident.

One telling observation from the data above is that none of the risks left a majority of experts feeling neither confident in our ability to prevent the risk from occurring, or prepared to mitigate its impact. As the 2020s are shaping up to be a turbulent decade, that could be a cause for concern.