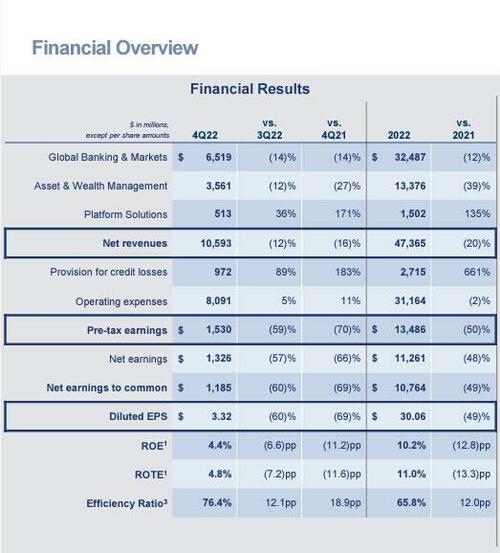 We already knew that Goldman’s consumer-facing group formerly known as Marcus and since renamed to Platform Solutions would have a dismal quarter, after the bank disclosed last Friday that the troubled segment incurred a whopping $1.2 billion loss for the first nine of last year, with losses accelerating by the year. The filing also showed pretax losses have mounted to $3 billion since the start of 2020 driven by a surge in bad loan provisions which surged to $942 million for the first nine of 2022.

So how did the rest of the bank perform? In a word: lousy, and as the bank reported moments ago, it missed bigly on both the top and bottom line, with overall revenues sliding 16% driven by “significantly lower” revenue in Asset and Wealth management and lower net revenues in Global Banking & Markets, and while equity Sales and Trading missed expectations, both FICC and Investment Banking came above consensus estimates. Here is the summary:

Similar to other banks, Goldman reported that its 4Q 22 provision for credit losses surged 183% to $972 million, reflecting provisions related to the credit card and point-of-sale loan portfolios, “primarily from growth and net charge-offs,and individual impairments on wholesale loans.”

Oh how the mighty have fallen: In 2008 Goldman made a killing on subprime; in 2022/23 Goldman is getting killed by subprime.

The investment-banking giant has poured billions of dollars into its retail effort, which includes the Apple Card and specialty-lending platform GreenSky. That operation, which posted revenue of just $513 million for the quarter, has been a drag on earnings over the past three years.

According to the bank operating expenses were 11% higher YoY, “reflecting higher compensation and benefits expenses and higher non-compensation expense.”

“Against a challenging economic backdrop, we delivered double-digit returns for our shareholders in 2022,” CEO David Solomon said in a statement Tuesday. “Our clear, near-term focus is realizing the benefits of our strategic realignment, which will strengthen our core businesses, scale our growth platforms and improve efficiency.”

As Bloomberg notes, the firm for the first time is showcasing the results of its key banking and trading units as a single division, an attempt to highlight its strengths relative to peers. As part of changes announced in October, Solomon also undid one of his own signature moves and reunited the wealth-management arm with the asset-management division.

Goldman also scaled back its ambitions for the consumer business, abandoning a goal to do business with the mass market. Key elements of that push have been dismantled, and what’s left has been set aside as the smallest stand-alone division, called Platform Solutions. That unit has been bolstered with the addition of the transaction-banking business.

Some more details from the report:

With slumping revenues, surging expenses, the industrywide slowdown and threat of a recession later this year, it is no surprise the bank joined its peers and announced it would cut as much as 3,200 jobs last week, a record for the bank which until now had been on a historic hiring spree.

After dropping Friday on early news of its Platform Solutions weakness, Goldman stock dropped again as investor focused on the company’s top and bottom line misses, and the surge in loan loss provisions, while ignoring the solid numbers reported by the bank’s FICC sales and trading and investment banking divisions. 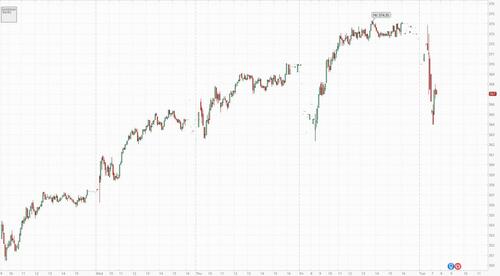 The company’s full investor presentation is below (pdf link):