Microsoft Reportedly Plans To Cut Thousands Of Jobs This Week 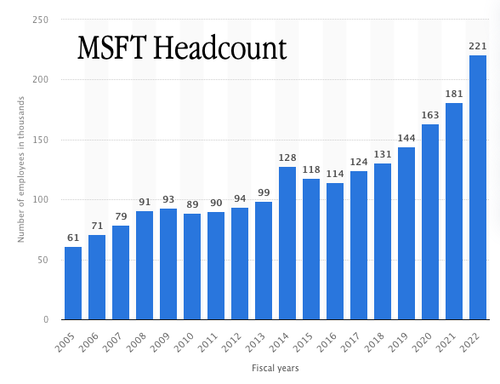 Here’s what people are saying about potential layoffs on an anonymous community app for the workplace called Blind:

“Microsoft does it in smaller phases and doesn’t cause a ripple in the news cycle,” someone said.

“Switching to unlimited PTO is not a good sign though, because MSFT won’t have to pay out any Unused PTO when they do layoffs.”

“A massive number of managers in Bing got a critical confidential meeting scheduled for Tuesday morning. Other than that, everything else I know about the layoff came from unconfirmed sources on Blind. But the time of this mass meeting lines up with the speculated Jan 17 – 18 layoff date.”

The magnitude of the cuts couldn’t be learned, but the person, who asked not to be identified discussing confidential matters, said the reduction will be significantly larger than other rounds in the past year. Those cuts impacted less than 1% of the software giant’s workforce of more than 200,000.

The US tech sector layoffs continue with news that Microsoft could reduce its headcount by thousands of jobs.

Sky News learned that the US tech giant is “finalizing plans” to reduce its workforce amid mounting macroeconomic headwinds. The announcement could come in the next few days. There was no mention of which jobs were at risk.

The latest filings show Microsoft’s total workforce is around 220,000 people. Sky News said the company is mulling over a reduction of 5% of its workforce, or about 11,000 jobs.

“That figure could not be verified on Tuesday evening, and one analyst suggested that Wall Street would be surprised if the figure was not higher than that,” noted the British paper.

Microsoft has gone on a hiring spree in the last several years.

Shares of Microsoft were widely unchanged as the news hit just a little bit ago.

And it was only last week when Microsoft gave its US employees unlimited time off.