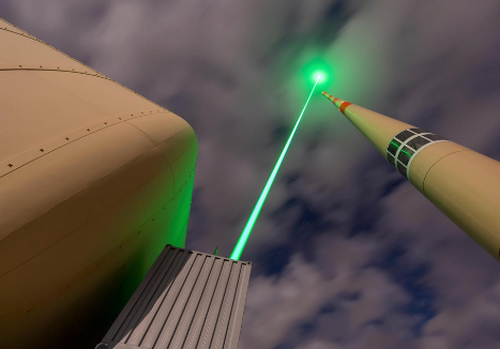 Scientists on top of a Swiss mountain shot laser pulses into a stormy sky to guide lightning for the first time. This might pave the way for laser-based lightning protection systems for rocket launchpads, military bases, airports, and supertall buildings. There hasn’t been an advance like this in lightning technology since Benjamin Franklin installed the first lightning rod in the 1750s, following an experiment flying a kite with a large metal key during a thunderstorm.

A team led by Aurélien Houard, a physicist at École Polytechnique in Palaiseau, France, experimented on the Säntis mountain in north-eastern Switzerland in the summer of 2021 with a high-repetition-rate terawatt laser.

The results were published Monday in the journal Nature Photonics. They showed how a terawatt-level laser pulse could steer lighting toward a 26-foot rod.

“This work paves the way for new atmospheric applications of ultrashort lasers and represents an important step forward in the development of a laser-based lightning protection for airports, launchpads or large infrastructures,” the researchers wrote in the study.

Matteo Clerici, a University of Glasgow physicist who wasn’t involved in the research, told WSJ the successful experiment is something “we’ve been dreaming of for decades … and the fact that they managed to do it in an outdoor environment is a very big step.”

Clerici called the experiment a “game-changer” but noted the technology is in early development and that commercialization could be years away.

WSJ showed how the technology works. A laser beam is blasted into the stormy sky and directs lightning toward the intended target, which happens to be a tall tower.

Houard disclosed to WSJ that the prototype laser costs about $2.17 billion. The cost is very high versus a traditional lightning rod, but over time, the technology will improve and become cheaper.