Bank Of America: Brace For A “Sharp Weakening Of The Job Market” 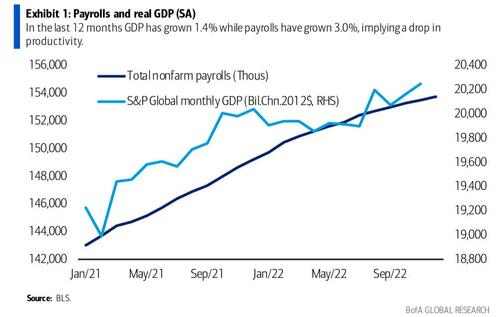 As discussed extensively over the past 24 hours, the US economy stumbled into December, to the point that bad news is once again bad news amid soaring recession fears. For those who missed it:

The first two of these are used in the official index of coincident indicators. However, as Bank of America economist Ethan Harris notes, the exception — as has been the case for some time  — has been the labor market with still strong payrolls, and very low jobless claims.

Paradoxically, this has been going on for a year now, or about as long as the Biden admin has desperately need some positive economic indicator to deflect from the galloping inflation created under his administration. It has gotten so absurd that even BofA today notes that “the labor market remains stronger than normal, even as the overall economy slips into a growth recession.” It has been going on, even as we have repeatedly shown, the establishment survey is politically biased and manipulated at worst, or misrepresenting the underlying data, as the Philly Fed claims.

Another way of summarizing the problem: in the last 12 months GDP has grown 1.4% while payrolls have grown 3.0%, implying a sharp drop in productivity. Productivity usually only drops on a sustained basis in recessions, and yet – if one believes the data released by the Biden regime – there is no recession.

So what’s going on?

As BofA’s economists suggest, in the process joining us in our chronic skepticism of BLS’ data “we are living through another period where job growth temporarily lags the business cycle.” They go on:

We have seen this several times before. The job recovery from the 1990s recession was labeled the ”jobless recovery” because payrolls were essentially flat and the unemployment rate rose about a percentage point in the first year of the economic expansion. Then starting in 1992 the job market took off, making up for lost time. The next recovery was more normal, but again, following the Great Financial Crisis, job growth was anemic, and the unemployment rate rose 0.5 pp in the first four months of the expansion. A third episode was the 1973-75 recession. This is perhaps more relevant because it was a period of weakening rather than recovering growth. The OPEC oil shock pushed the economy into a recession in November 1973, but for a year, jobs continued to grow. Then the job market finally cracked, with payrolls plunging almost 3% in six months.“

The bottom line is that today’s job market “shares some elements of the 1973-75 experience”, as does inflation of course, especially if Powell ends up being Burns after all, and cuts rates in 2023 (spoiler alert: he will) only to see a burst of inflation in 2024 and onward. Back then, businesses were reluctant to accept that the economy was in recession: “this was in part due to unfamiliarity with how the oil shock could hurt the economy (indeed, macro models at the time did not include oil prices as a variable).”

Today, like in the 1970s, BofA argues that there still seems to be a good deal of hope that the economy can achieve a soft landing (here’s looking at Goldman, who is the biggest culprit in spreading this misconception). In part this is likely because there have been some false alarms on a recession. It is also because the Fed and many economists are still holding out hope for a soft landing. But when a recession does come, there will be some catching up to do.

A second reason why Bank of America is looking for a “delayed, but sharp, weakening of the job market” is unique to the current economy. According to BofA economists companies have had a miserable time of trying to hire and retain in the past couple years. Hence many are hoarding workers and others are busy filling their job postings. But when (not if) recession becomes the consensus call this hoarding no longer makes sense and companies with openings could withdraw some postings and apply more normal standards in hiring. Indeed, we are already seeing this in process with the % of companies listing labor availability as a constraint plummeting from 77% in October to just 30% in January, the lowest in years.

Yesterday’s Beige Book hinted as much, with the NY Fed noting that “A number of business contacts reported that it has become somewhat easier to attract and retain workers. A large upstate New York employer noted that turnover has slowed noticeably in recent weeks and that attrition rates have now fallen below pre-pandemic levels.”

The bottom line, as Bank of America puts it, is that the job market would need to catch up – or rather down – to the rest of the economy, i.e., “The sector that is doing the most to hold up growth (and threaten inflation), could become a weak sector.”

In conclusion, Harris says that “a hot question among investors is what gets the Fed to not only slow down rate hikes, but to go on hold. We think a break in the job market—with a shift to flat or negative growth—could do the trick.“

More in the full note available to professional sub.