Will Global Stock Markets Crash In 2023? 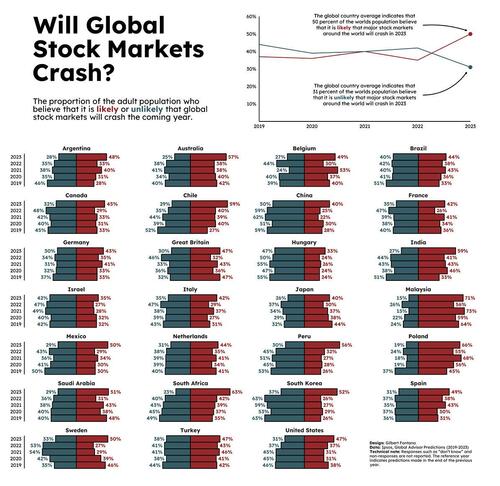 For the upcoming year, expert predictions have ranged from extreme optimism to not-so-subtle nervousness, especially when it comes to gauging the health of the global economy.

This chart from Gilbert Fontana skips past expert predictions, and looks directly at those of citizens in multiple countries around the world.

The annual reports used to generate the charts draw from a 36-country survey of more than 24,000 adults. Each country shown had at least 500 individuals sampled, with countries in the G7 and other major economies including China, Brazil, and South Korea having approximately 1,000 individuals sampled.

Specifically, respondents were asked a question on whether “major stock markets around the world will crash” in the following year, and were asked to respond either “likely” or “unlikely”.

Responses were collected at the end of the previous year in question. For example, for 2023, survey data was collected in October and November 2022. Responses of uncertainty or non-answers weren’t included in the chart above.

And across the board, each country’s data was also weighted to accurately reflect its demographic profile according to recent census data.

When looking forward to 2023, most of the respondents from around the world felt that the likelihood of global stock markets crashing was more likely than unlikely.

In 24 of the 27 countries sampled, citizens thought it was more likely than not that global stock markets would crash in 2023. This includes the entire G7, with 40–47% of each member’s citizens responding “likely” compared to 26–35% responding “unlikely.”

The most pessimistic responses came from Malaysia, Poland, and South Africa, where more than 60% of respondents thought it was likely that markets would crash in 2023. Malaysian citizens led the way with 71% viewing a 2023 crash as likely.

The only three countries where citizens believed a 2023 stock market crash was less likely were China, Israel, and Hungary. China had the highest “unlikely” response rate at 50%, while in Hungary, just 33% of respondents responded “likely” compared to 47% responding unlikely.

When comparing 2023 responses to those from 2019, we can see that the last five years have brought uncertainty and pessimism to most countries:

Responses of global stock markets likely crashing rose in 25 of the 27 countries, with 8 countries increasing by more than 20 percentage points (pp). Notably, neighbors Chile and Peru had the highest increases at 32 pp and 30 pp respectively.

But neighboring sentiments didn’t track worldwide. For example, while South Korea had one of the biggest increases in “likely” responses towards stock markets crashing at 26 pp, Japan was the only country that responded in a lower likelihood by 4 pp.

While global sentiment is becoming increasingly pessimistic, we can also see that previous year’s predictions didn’t always pan out. So the question remains, what will 2023 really bring?