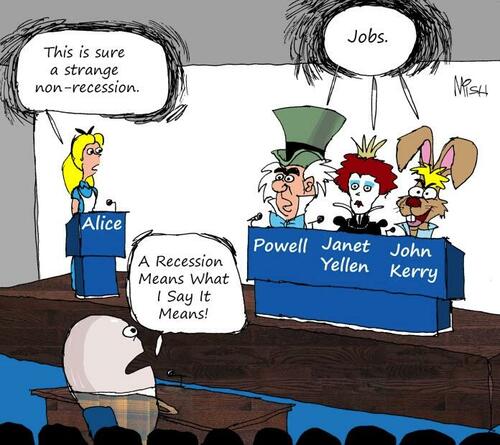 Alice challenged the Mad Hatter, the Red Queen, and the March Hare to a debate on whether or not the economy was in a recession…

Setting the Stage for a Debate

While traveling through Wonderland, Alice met Humpty Dumpty. He was reading the dictionary that he wrote.

Alice asked Humpty if he would discuss recession. “Sure, I will discuss anything,” said Humpty.

Alice quipped, “This sure seems like a strange non-recession.”

“Oh,” said Humpty. “In Wonderland, when you hint there may be a recession, you automatically agree to a debate”.

“Wonderland loves nothing more than a debate on recession,” said Humpty, adding “I will moderate and keep score.”

With that, Humpty blew a horn signifying an unscheduled debate.

The Debate is On

“Three on one does not seem fair,” said Alice.

Humpty admonished, “If this was a scheduled debate it would have been 57-1. No one in Wonderland thinks we are in a recession or that one is imminent.

“Since you made the challenge you go first.”

“And not only that”, Alice continued, “Housing Starts and Permits Down Again in December Closing Out a Dismal Year.”

Alice then brought up the inverted yield curve. “The Yield Curve is the Most Inverted Since the Early 1980s,” said Alice.

Alice thought she knew where this was going. However, the March Hare blurted out “Climate Change”.

With that reply, the debate took a turn.

“What’s climate change have to …” started Alice, but she was rudely interrupted.

The Mad Hatter then added, “We expect to spend $50 trillion on climate change. And that will create 10,000 jobs.”

“What!?” said a shocked Alice who noted “That’s $5 billion for every job created.”

“My dear Alice,” started the March Hare. “In Wonderland, we not only count jobs created, we count jobs saved.”

“Some people think the World Will End in 12 Years if we do nothing, but our calculations are different.”

“Our super-proprietary climate models say Florida will be totally underwater in precisely 5.7368 years and California will slide into the ocean 13 seconds later making Las Vegas a beach resort.”

The March Hare continued “There may be some advantages to Florida going underwater, but to save California we first have to save Florida.”

“That’s a moot point because everyone knows we don’t play politics in Wonderland,” added the Hare.

Team Wonderland cheered as Humpty awarded them another 27 points, one for each million jobs saved.

“But what about the inflationary aspects of spending $50 trillion to create only 10,000 new jobs,” asked Alice.

“Let me handle this one,” said the Mad Hatter to his team. “There will be no inflation from this because we do not count food or energy and we are thinking about not counting shelter, cars, and air travel.”

“Why count anything at all?” Alice asked sarcastically.

Not picking up on the sarcasm, Humpty shouted “One point to Alice.”

Alice pointed out the huge discrepancy between jobs and employment. “Nonfarm payrolls are supposedly up 2.9 million but employment is only up 916,000.”

Alice also said she expected revisions to the strong jobs numbers noting Microsoft to Eliminate 10,000 Jobs Before the End of March

“Off with their heads,” said the Red Queen, “It will be great for jobs.”

Losing Jobs is Great for Jobs

Alice was sure she won this point but the March Hare rebutted.

“The more jobs we lose and the faster we lose them, the more likely we will be able to spend $50 trillion to create and save jobs,” said the Hare.

“It’s imperative we lose enough jobs right away to save the world,” added the Mad Hatter.

“Off with their heads,” said the Red Queen.

Alice lost the coin flip and had to go first.

She cited a litany of factors suggesting that a recession either started or was imminent.

“Time’s up,” said Humpty. “Team Wonderland, what are your closing remarks?”

“Off with their heads,” said the Red Queen.

Humpty awarded 82 points to Team Wonderland for those closing remarks.

“That makes the final score 654 to -97,” said Humpty. Team Wonderland erupted with a big round of cheers and high-fives.

Alice complained to Humpty. “This is a rigged score,” she bitterly said.

“Young lady, I don’t take kindly to those remarks. -97 is an excellent score for your side. If you didn’t suggest to not count anything regarding inflation, the score would have been 654 to -987. You are the first person to ever score a point against Team Wonderland!”

“I am going back to my wall to tell you how it is.” With that comment, Humpty climbed a ladder, sat on his wall, and started lecturing Alice.

“In Wonderland, inflation is always and everywhere a good thing,” admonished Humpty.

“Sometimes, like now, we pretend to do something about inflation to keep the Wonderland peasants from revolting.”

Humpty continued “Regarding recession, I get to make the call. A recession is whatever I say it is. It happens when I say it does.”

“And as long as I preside over this wall there will be no recession, lectured Humpty.”

Humpty got increasingly agitated at Alice. His arms flailed wildly side to side and he started to slip.

Alice could not bear to watch. She turned away and muttered, “I don’t think this will be a soft landing.”

“Call out the king’s horses,” shouted the Red Queen.

The Mad Hatter just stood there, too shocked to do or say anything.