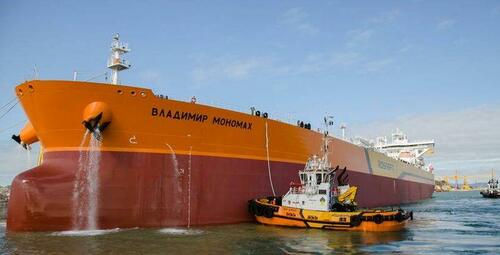 By Charles Kennedy of Oilprice.com,

While the European Union’s seaborne imports of Russian crude oil declined by just over 12% last year, Russia still enjoyed status as the top seaborne oil supplier to the bloc, despite sanctions…

For 2022, Russia still accounted for 21.9% of European seaborne imports of Russian crude, followed by the North Sea, which accounted for 17% and North Africa, at 15.4%.

But the biggest surge came from the Arabian Gulf, registering a 76.4% increase year-on-year in 2022, though this is still down from the levels of 2019, while the U.S. exports to Europe were record-breaking.

Overall, Banchero said, citing Refinitiv data, “2022 has turned out to be a very positive year for crude oil trade, despite the surging oil prices and risks of economic recession”.

Though Russia has seen its exports to the EU decline by over 12% last year, the data shows that overall it saw an increase in exports by 10.3% to 2018.5 million tonnes. That figure is only slightly below 2019 levels.

Likewise, the United States also experienced a surge in exports of crude oil, gaining over 22% in the twelve months of 2022, as did Saudi Arabia, showing an over 17% increase.

This compares to West Africa and the North Sea, both of which saw a decline in oil exports for 2022.

On the demand side of the equation, China’s intake of seaborne crude oil overall dropped by 3.6% last year, while India saw the reverse: an 11.7% increase in imports.

Climate change is altering the chemistry of wine

The ‘land grab’ for lithium is just getting started with GM deal, says EV materials expert