Thursday Flip Flop – Indexes Go Up and Down in the Range 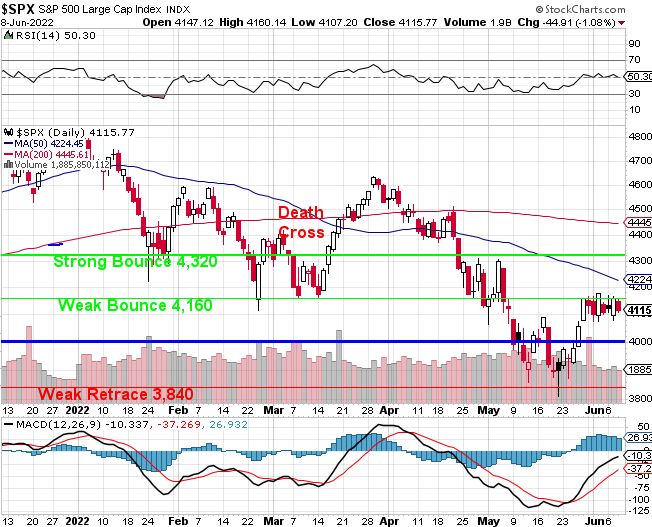 In a weakly bouncing market, with you…" – Phil & Ringo

That's the song we've been singing since late last month as, again and again, the S&P and the other indexes fail to break over their weak bounce lines.

HOPEFULLY (not a valid trading strategy), we are consolidating for a move higher but, as I warned back on May 13th in "Flip Flop Friday – Stocks Cheer Up for no Particular Reason":

As you can see from our S&P 500 chart, there's been a lot of damage done since the Death Cross last month but it's only within our predicted range – nothing to shake us out of our overall strategy.  We anticipate the 4,000 line (blue) to evenually settle down as the middle of the range between 3,680 and 4,320, where the S&P should consolidate into July earnings reports and then we'll see how they go.

So we have 5 weeks for things to improve or the technicals will be significantly worse for the rest of the summer and we'll expect to see 3,840 again, before we see 4,320.  All this is likely to happen anyway as we expected the range to settle down around 4,000 for the rest of the year but just because we predict something – doesn't mean we stop looking for new evidence, does it?

The question is, what's likely to happen in the next 25 sessions that will push the markets over that 4,160 line?  We need the War to end, good news on Inflation, better Earnings Reports, more Stimulus, slower Rate Hikes or other positive Economic Data to move higher, right?  The Fed meets next week and they WILL hike 0.5%, big Earnings don't come again until mid July and the pre-announcements are killing us so far.  As I mentioned the other day, Russia was in Afghanistan for 20 years so why do we think Ukraine will end any time soon?  Stimulus needs Congress to unite (pause for laughter) and the data has been downright depressing so, I am very sorry to say but it looks like we'll be LUCKY to drift along near the Weak Bounce Line until mid-July.

It's all just rearranging deck chairs on the Titanic at the moment as the global economy is slowing (see yesterday's PSW Report) and it will be a miracle if we avoid a Recession and not that surprising if we throw ourselves a Depression since we swept one under the rug the past two years – at a cost of over $11 TRILLION Dollars to prop up our $20Tn Economy.  All that bought us was a prettier GDP number but it came at the expense of our balance sheet and now its time to pay the piper and I know there are a lot of pundits telling you that there are no consequences to borrowing 50% of your GDP in 24 months – especially when you have nothing lasting to show for it –  but those people are IDIOTS or, as we like to call them – Economorons.

At some point, I think it was 2001, the Government decided that people couldn't handle any sort of economic retraction and the very idea of balancing the budget went out the window.  Clinton left us with $5.6Tn in total debt, which was 36.6% of our GDP at the time but now our debt is $32Tn, 150% of our GDP and the Fed's 2% rise in rates this year will add $700Bn in interest payments alone going forward.  That will be added to our still $2Tn ANNUAL deficit and the only way that changes is to raise revenues (not likely in a Recession) or cut taxes (not likely given our Government is just a bunch of corporate puppets).

This is a cool chart but it's from early 2020 so they underestimated our debt load in 2022 by about $10Tn – we're already where they thought we would be in 2045, where the comment on the chart is:  "The indefinite rise of debt could spell trouble – with possible domino effects of ballooning inflation and declining confidence in the US Dollar as an International Reserve Currency":

It's interactive, so play with it.  It's also depressing – so play carefully…. As we predicted, there was tepid demand for 10-year notes in yesterday's (another Beatle song!) first 10-year auction with less Fed buying and, since no one REALLY wants to lend us money – the 10-year rate popped up to 3.03% and the 30-year is now 3.2%.  The auction saw "a distinct lack of enthusiasm," Jim Vogel, an interest rate strategist at FHN Financial, said in a report.  That was $33Bn in 10-year notes and they sold $44Bn worth of 3-year notes on Tuesday and today they are going to sell $19Bn worth of 30-year notes and that $98Bn is only enough to keep the lighs on for 2 WEEKS at our current deficit rate – which will go up 50% next year as rates rise.

"This is the life of illusion
Wrapped up in trouble, laced with confusion
What are we doing here? Everything was fine in Greece – until it wasn't.  The US borrows $200Bn per month and, up until now, the Fed has been pritning it but now the Fed has close to a $10Tn balance sheet and they are tapering their bond purchases but who is going to step in and fill the vacuum – especially in a World that is having its own economic issues – why would they be lending us money?  At the moment, the Dollar is still strong and that's keeping demand up but what happens if the Dollar weakens and people don't want our currency or notes that are priced in our currency?

Notice France's 10-year notes popped over 12.5% during that time, Spain and Italy hit 6%.  6% of $32Tn is $2Tn – even if it only lasts for a year that would be devatating as the interest would add $2Tn to our debt in a single year and we'd have to borrow $400Bn a month to make those payments – how is that a stable outlook?

Check your hedges!  Make sure you are very well-covered!

yeah I am familiar with stock options and employee bonuses. The employee gets restricted stock units (RSUs), which vest over a period of time. Is this 4K pre-split shares? That sounds a lot for a manager (worth 10MM). I know that entry level people were getting 50 RSUs a year some years back, which would work out to 4K post-split shares now. Takes i think 4 years to vest fully.

Finish is not going well – down about 2%.   Added those hedges just in time.

And what Pirate said.

And what RN said… Dollar went nuts today and tanked the market.  107 would be very, very high. I think people are bailing ahead of the Inflation Data tomorrow – one of the things most likely to cause a sell-off.

4000 of the post-split but still pretty rockstar. Her salary used to be less than 50k / year with us.

Oh so it was 200 original shares – that's pretty normal for them.