Testy Tuesday – All Time Highs Ahead of the Fed, What Can Go Wrong? What can go wrong?

Certainly people with adjustable mortgages are not ready or revolving debt (reccord highs) or variable loans like Corporations tend to have, which would add $400Bn to their $2Tn debt balance.  Are the banks ready to have their loan margins squeezed as rates climb, which is often the case?

Even just 3% would require 7 rate hikes in 8 meetings – unless the Fed hikes us this year, then it would be 6 of 8 or, if they surprise us and hike tomorrow, they buy a bit of fexibility next year and "only" have to hike rates 0.25 every other meeting, plut one.  Their other projections are on track.  The market thought lowering the Q3 GDP forecast (see yesterday's Morning Report) would keep the Fed off the table but they are only projecting 2.0-2.4% GDP for 2017 and LESS next year – so we're right on track. 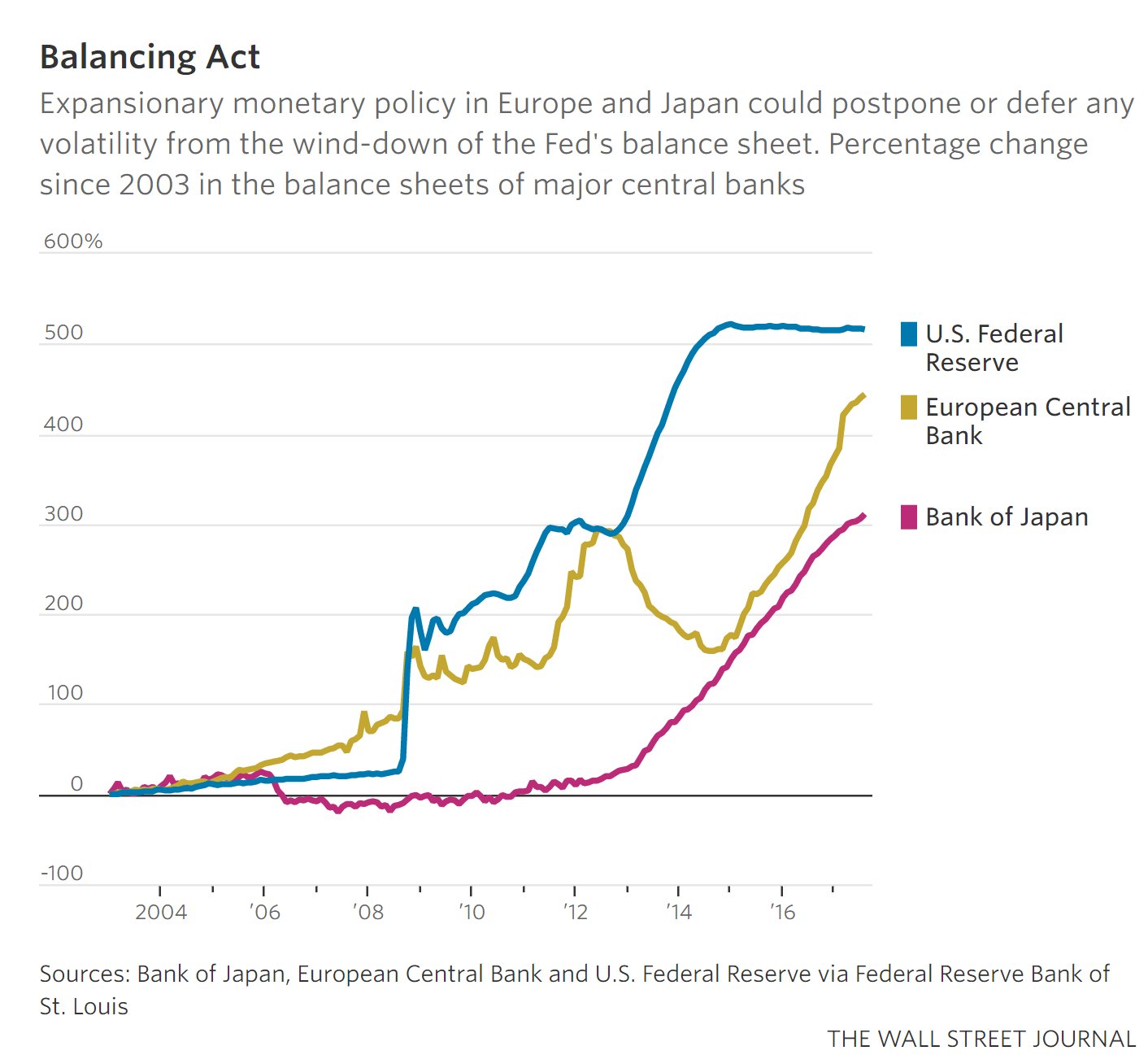 Unemployment is below their target, Inflation is above – there's really no excuse for the Fed NOT to raise rates so don't be surprised if everyone is surprised tomorrow by a quarter-point hike, hurricane or no hurricane.  Of much more concern than the rates going up (though the repercussions of that alone will be tragic) is the potential unwinding of the Fed's Balance Sheet, which currently stands at $4.47 TRILLION and that's up about $3.7Tn since 2008.

Even if the Fed "only" withdraws their money over the same 8 years they put it in, that's $500Bn a year coming OUT of the economy – no wonder they project a significantly lower GDP next year!   Meanwhile, the BOJ and the ECB have been putting in $400Bn a month and Japan's stimulus is so out of proportion to their $5Tn economy (1/4 of ours and Europe's) that an unwinding there would be catastrophic but NOT unwinding while we do and the ECB does would collapse their currency and be equally catastrophic. Nonetheless, the Nikkei has flown back to it's century high of 20,200, which we last hit in late 2015 before crashing 25% back to 15,000 a year later.  A year is a long time and tops can last a while but let's keep an eye on /NKD as we are about to conduct a really good test as to whether a stock market can remain at a top – even as the economy of the country collapses. 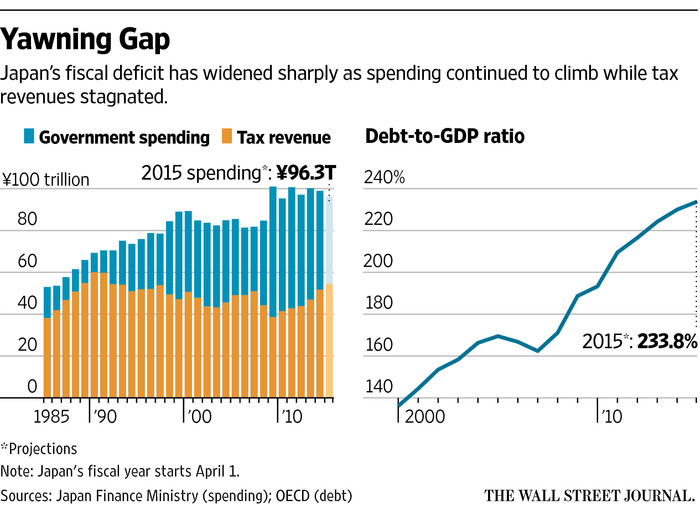 Meanwhile, Japan's budget deficit is 10% of GDP and tax revenue is only 10% of the GDP and $400Bn x 90 is 36 TRILLION Yen so add that to the deficit chart and then contemplate whether you would lend Japan money at 3%.  This is pretty much what happened to Greece only Japan is many times worse off than Greece ever was with one crucial exception – Japan can print it's own money.

That's what it's all about folks – the power to print money allows contries to go into near infinite debt and Japan is the ultimate experiment in pushing QE to the limit.  Unfortunately, Japan's GDP growth hasn't even cracked the 1% line since QE started in 2010 but, rather than give up in 2012 (after 2011 reversed the gains of 2010) they doubled down – and then they doubled down again and again.

So hear we are, a bunch of economies that have been living on QE life-support for 10 years and now the Central Bank Doctors are going to pull the plug and see how it goes.  Wait, they are not just pulling the plug, they are going to start drawing back all the blood they've been steadily transfusing as well.  Well take two happy pills and call us in the morning – because you're going to need them next year!

Did I say next year?  I mean next decade, of course.  Because, EVEN IF, the unwind goes smoothly, it will also go relentlessly and it will be a burden on our economy for a decade.  While that's going on, President Trump plans to cut our tax revenues to Japanese levels in hopes of stimulating the economy.  If we follow that plan and our debt trajectory matches Japan's – we'll be close to $30,000,000,000,000 in debt by the time Trump is dragged out of the White House in 2025 (yes, the next election will be fixed and no, he won't be impeached).

Even if the Fed keeps rates at 3% and Japan doesn't collapse and Europe keeps it together and North Korea doesn't start WWIII and Russia plays nice and the collapse of Venezuela is contained and Global Warming doesn't destroy the East Coast – we'll still have to pay $900Bn Dollars a year in interest alone on our debt.  We're paying about $220Bn now so either we cut another $680Bn of Federal Programs (20%) JUST to pay the interest or we rack up another $680Bn of debt per year – which is the path Japan has chosen for their run. 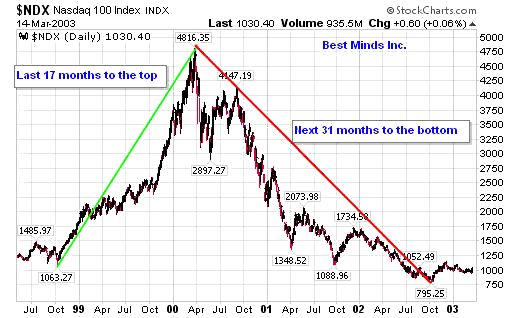 If I wanted to make a bullish case, I'd say the Wilshire 5,000 does more business internationally these days so the "economy" we're measuring against should be expanded.  Also, the Dollar was indexed at 120 back in 2000 and now it's barely holding 90 so of course stocks are going to be relatively more expensive but, on the other hand, that means we should discount GDP 30% to keep it in constant Dollars and that would bring it back down to $13Tn and that would make the markets 200% of constant GDP, which would be completely ridiculous and oops, I accidentally just made the bear case while trying to make the bull case.

I know I sleep better at night!

API/Craigs –  That sounds about right.   It's logical, because refineries were shut down and couldn't make products. I can't see why that would be bullish for oil.   Not village for gasoline either, no particular sign of demand.

BBBY I would think there will be lots of buying to replace hurricane-damaged household items, so the next couple quarters should be good if they can get their stores up and running soon.

BBBY/Jet – I agree, if sheets and linens get moldy, you get new ones.  Plus household items, cleaners, etc.  Still, I think TGT is the safer bet.

This is cool, you can see them rolling contracts on the NYMEX (things flash simultaneously).  Unfortunately, no Open Interest column:  http://www.cmegroup.com/trading/energy/crude-oil/light-sweet-crude.html

Watching coverage of the earthquake in Mexico City on Univision.  I don't see much of coverage of this on the English channels or outlets.  Trump effect?  Was a 7.1 quake.  Seems like we're heading for the end of days.

End of days… is that bullish?

I will be here after the rapture, that's why I ask… nothing fazes this market.

One of my friends who lives in Cuernavaca (30 or so miles S. of Mexico City) skyped me and told me it was total chaos there! She and her family are safe although some damage in houses.

7.1 is a pretty bad quake, I bet it is, hope for the best for those involved. Worse than a hurricane, it just hits you all at once. No warning I heard. Live every day like it's your last, you just never know.

I don't think Americans ever care about things that happen in other countries.  Except the Tsunami a few years ago – for some reason, that got a ton of people to donate.

No bitcoin here, had greencoin until my laptop was stolen. Any way to reclaim them? Only copy I had of the wallet. I assume it's gone?

How is EGC doing? Looks like it has taken a hit.

Good Morning. Are you comfortable with tour short with the upcoming fed. Thx

No Ravi – I'm not comfortable with my shorts but I'm sticking with them as I have a strong feeling. Oil burned me for $5K last night and for idiotic reasons so I'm taking my lumps and waiting for reality to set in in a week or two:

Finally someone else has adopted my macro thesis on oil:  IEA warns $1.3 trillion of oil and gas could be left stranded – The International Energy Agency (IEA) has warned oil and gas companies that failing to adapt to the lower carbon energy agenda could lead to over a trillion dollars worth of assets being abandoned by 2050. 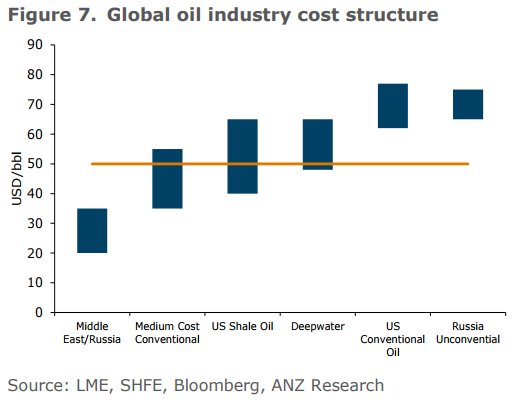 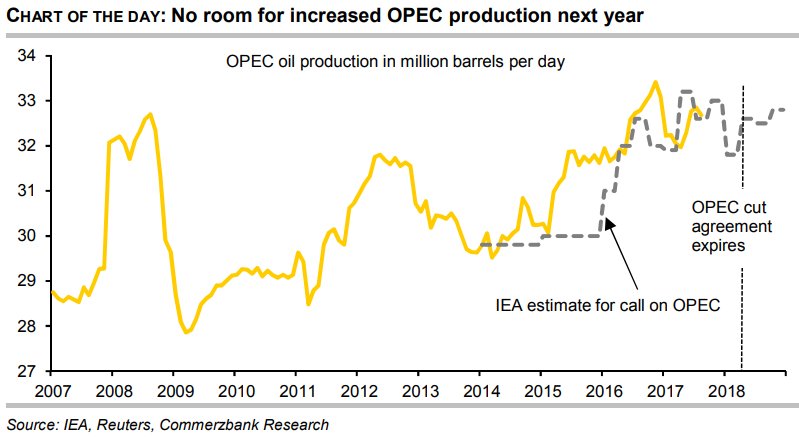 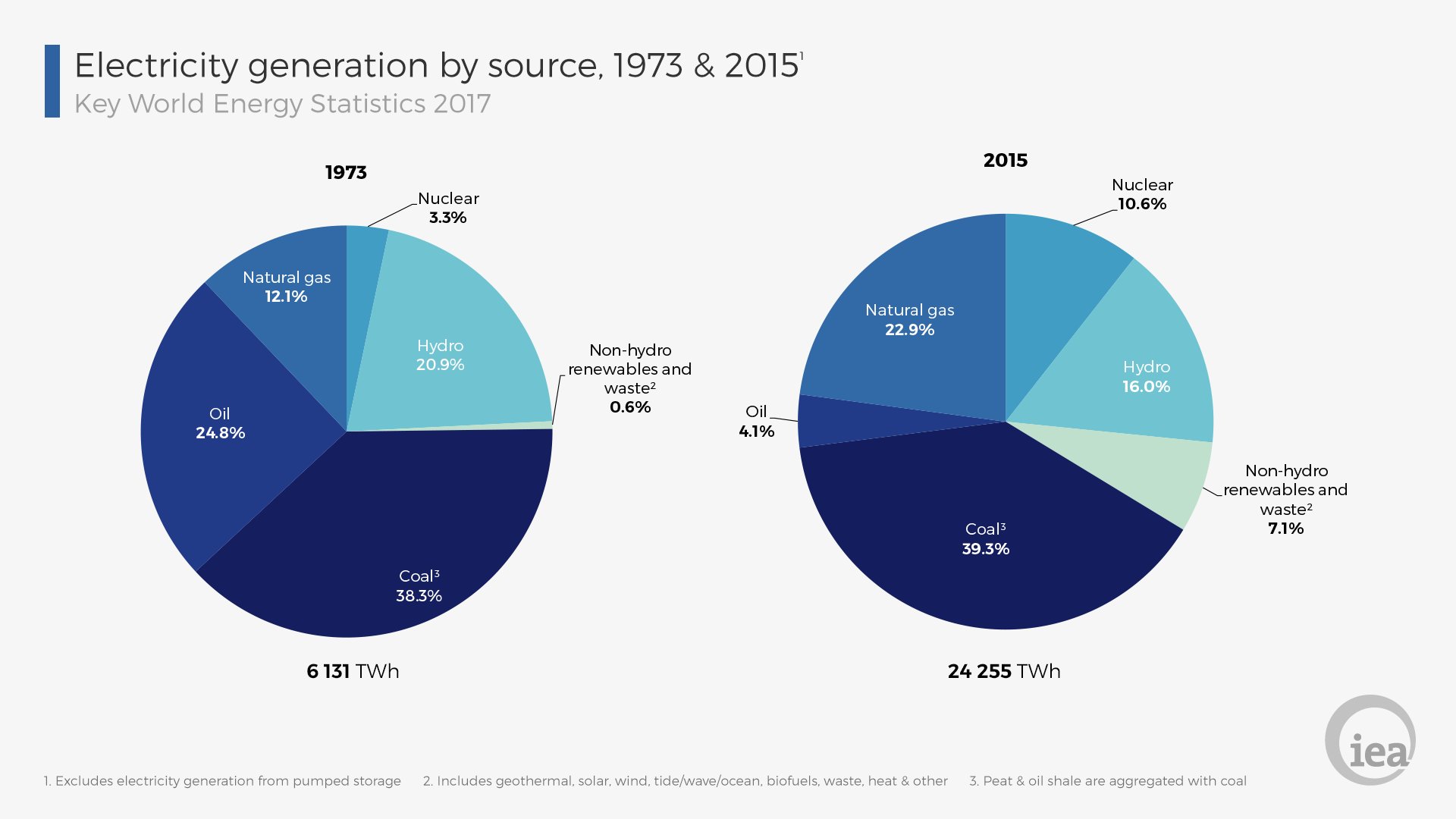 Laptop/Mkucs – That's so annoying.  See, that's a bit of a problem with crypto – if you are not really into all the tech stuff (like ordinary people) – then you feel the burden of having to protect your money.  This is why we have money and banks – people don't want to have to fend off criminals in order to keep their money safe (so we give our money to even worse criminals to hold).

Generally, things are very flat ahead of the Fed but that's not impressive with the Dollar under 91.50