On Sunday Alan Greenspan said "This is the Worst Economy I’ve Ever Seen."

That’s a pretty bold statement from the guy that built it!  Greenspan noted that the government was left with tough decisions: which institutions are "so fundamental to the functioning" of society that they demanded a federal safety net? Earlier in the week, the former fed chairman noted that such choses extended to tax policy as well. In an interview with Bloomberg Television, Greenspan argued that the country couldn’t afford the tax cuts being proposed by John McCain without an equally massive reduction in spending.  "I’m not in favor of financing tax cuts with borrowed money," he said. "I always have tied tax cuts to spending."

It will be interesting to see what Bernanke has to say today in the FOMC minutes, clearly we can’t just keep throwing more money at this problem but that’s never stopped this administration before which is why we are favoring some hedging in gold, in case our government’s solution is another $250Bn or so tossed onto the fire.  It is shocking that, still, no one seems to be addressing the actual problem – people cannot afford their mortgages.  2.2M home foreclosures were filed last year and close to 3M homes will get filings this year.  Every home that is foreclosed and dumped back on the market by the bank devalues the homes around it, causing problems for the remaining homeowners and it spreads like a disease.

5M US homes carry an average mortgage of $200,000 each, that’s $1Tn and their loss causes a write down of at least $400Bn, probably $600Bn.  That write-down is future tax revenues not collected so the government is eating $200Bn whether they help or not.  Since those foreclosed properties also cause additional performing asset write-downs, the losses can quickly double or triple.  How much is the mortgage on $1Tn worth of homes?  If those homes loans were backed directly by the government, paying every single one of them off in their entirety at 5.75% interest (and the government should be able to do better) would be $5,835,730,000 a month.

That’s right, $70Bn a year to fix every bank in America at once, to put value back on the books, keep American families in their homes, maintain home prices and give the country a chance to take a collective breath.  Is that an outrageous idea, the government already took over the GSEs, effectively backing the loans of $5Tn worth of properies but that does nothing to stop the properties from failing.  Politicians like to say they have a plan to fix the economy – then why don’t they have enough faith in it to lend the voters a few bucks while their plan works its magic?  Penalties for accepting government aid would have to be harsh to prevent people from taking advantage (signing over all equity, agreeing to a workout schedule) but if we can at least forestall 1/2 of the foreclosures it would be a tremendous benefit to the financial markets. It’s a shame that something so simple isn’t even being attempted, the government already dumped $160Bn worth of stimulus checks on the market and they had very little effect and foreclosures are accelerating as the economy worsens.  The program could be enacted with a pen-stroke – just tell the banks to forestall any existing foreclosure action for 90 days and the government will pick up the tab ($17.5Bn) while we begin a case interview process to make sure we are identifying actual families living in their primary residences.  Figure we can assign 100 homes to each case worker over 90 days and that’s 50,000 jobs created and they will be proportionally in the most affected areas (another $2-$3Bn a year in salaries).

This is a cheaper solution than my $13.5Bn a month plan to stop the housing crisis back in April and it helps a lot less people directly but, after wasting so much cash on things that help nobody, we need to scale back our expectations.

Expectations are certainly scaled back for the market today as we are down 50 points pre-market (8am) as we wait for the CPI report for August as well as GS and MS earnings.  The WSJ has a useful article today called "How to Handle a Market Gone Mad" with a good overview of the psychology that is gripping investors this week.  WM was downgraded to junk status last night and AIG has been downgraded to near-junk and may unwind quickly if they can’t raise capital (a lot of it) or get government backing.  AIG holds $1Tn in assets, that could be one hell of a fire sale! 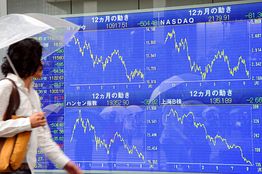 Asia was hit hard this morning, catching up from being closed yesterday, with the Hang Seng dropping 1,052 points (5.4%), the Nikkei falling 605 points (5%) and the Shanghai Composite fell 4.5%.  If you want to make a bullish bet early in the day, the FXI tracks 25 Chinese stocks and may respond well on the off chance the Fed cheers us up later today.  At 33(ish) it’s over 50% off its highs of last November and yesterday and the day before and the day before that they jumped over 2% off their open.

On the whole, there is not much to be bullish about.  Europe is off about 2.5% but BCS is back in the game, looking to pick up a large chunk of LEH’s US operations now that they can take them away without picking up the attached toxic loans.  The overnight Libor rates shot up from 2.146% on Friday to 3.106% today, indicating banks are not willing to lend to each other.  I’m very concerned about our future as investing in the US has become less appealing with only GS or MS to choose from.  That level of asset concentration makes foreign lenders nervous and it’s a big World out there to invest in.  England is also feeling the wrath of foreign banks:  "We dislike the U.K. banks. They were the ones, along with UBS, buying up the subprime, and they, like the American banks, had the problem with accounting for risk," said Gianmaria Bergantino, head of asset manager at the Rome office of Bank Insinger de Beaufort NV.

Speaking of GS and MS – Goldman reported a small beat at $1.81 per share ($1.71 expected) but that’s off 71% from last quarter.  "This was a challenging quarter as we saw a marked decrease in client activity and declining asset valuations," Lloyd Blankfein, Goldman CEO, said in a press release.   MS does not report today, it turns out they report tomorrow so we do have one to wait for.  GS shares fell off and a lot of emphasis will be placed on the 11 am conference call, especially relating to how they are valuing assets.  We’ll have to keep an eye on the SKFs around to $140 line to see which way things look to be going.

Oil is racing to $90 despite a hefty 2% pullback in the dollar over the past 2 days.  Today’s Fed decision will mean a lot but I’d rather bet gold up than oil up as a reaction to Fed easing.  It looks like we will be opening back at the July 15th lows but it’s unlikely we’ll turn up without further capitulation as it’s now 9am and there has been nothing encouraging from our "leaders."

HBOS fell apart so fast they had to rush to announce merger with Lloyds, which is now looked at as a save an not necessarily a great thing.  Oil’s up a lot too, that’s never a help.

Lets not forget that General Petraeus has been replaced in Iraq.  He now will take over "Central Command"  in the Middle East.  The next surge is to be Afghanistan.  Lets watch political events in the region closely, escalation is likely.

Sept. 16 (Bloomberg) — The House of Representatives passed a Democrat-sponsored energy bill that would expand U.S. offshore drilling and increase taxes on oil companies by $18 billion.

White House officials threatened a veto of the 290-page measure, which was approved on a 236-189 vote, largely along party lines. New revenue would be used to fund alternative energy development.

The bill would retain part of a drilling ban set to expire Sept. 30 and prevent drilling outside three miles off the U.S. coast. The measure would allow drilling on the Outer Continental Shelf beyond 100 miles. States could permit drilling between 50 miles and 100 miles.