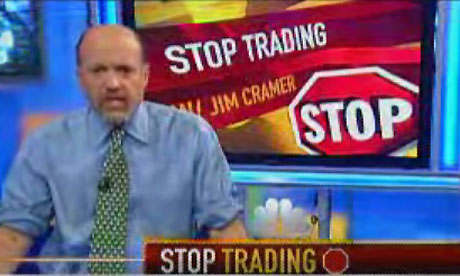 That brings the S&P down to about 550 points, about 20% down from here.  Interestingly, Cramer prefaces his comment by saying "is the media too negative" (and here is Jim on the Colbert Report expanding on that) and the funniest, or perhaps most tragic aspect of this is that what he tells his viewers (9 minutes in): "I did an analysis today for TheStreet.com where I factored in every single stock from bottoms up using all bear cases and I came up with 5,320 for the Dow."  That is where he left the subject on the TV show.   If you do, however, happen to be a (gasp!) reader, the actual article on TheStreet.com says the following:

Keep in mind that this analysis was done with an eye toward the continued wealth destruction, and it is not something that I expect will happen right now, all at once. We are due for the inevitable bounce, and I don't want to ignore it. And with that note of caution, drum roll please: 5320. I simply can't get any lower no matter what I do. I just can't. So with that in mind, you can say that 15%, give or take a few percent, might actually be, are you ready, buyable if we get to 6000. Frankly, after this analysis, I am more sanguine, not less, because of how harsh and disaster-oriented this line-by-line calculation is.

Wow – talk about a mixed message.  The omission of that one paragraph from the TV show (and he had 50 minutes left at the time) gave an ENTIRELY different tone to the TV audience than he did to his TheStreet.com readers.  I don't know what Cramer's motivation is in giving a mixed message, effectively a sell signal to the TV crowd (which is picked up by most of the media) while telling his subscribers to buy (but only the ones who know what "sanguine" means).  This is not a game Jim – people are making life decisions with their 401Ks and there's a pretty big difference between saying the Dow is heading down 19.7% and I think we're bottoming out 10% from now and that's a buying opportunity.  Obviously, the benefit to this tactic is, either way, Jim will have something to point to to tell you he was right but how about a little consideration for the audience, who ultimately pay your salary?

The WSJ is jumping on the media bandwagon this morning with the headline "Dow 5,000?  A Bearish Possibility" saying: "As earnings estimates are ratcheted down and hopes for a quick economic fix fade, the once-inconceivable notion of returning to Dow 5000 or S&P 500 at 500 looks a little less far-fetched."  Goldman Sachs's David Kostin in late February presented three scenarios for the S&P, including a "bear case" that put the index at 400 to 500. Although Mr. Kostin says he doesn't anticipate the index will fall that low, "these are the cases that different types of investors are making," he says. Goldman's S&P estimates are 33% lower than average – which makes sense as their estimates a year ago were about 33% higher than average as they herded the suckers into the top of the market with the same enthusiasm they are now chasing them out.  Buy low and sell high works so much better when you force extreme lows and extreme highs.  As you can see from Cramer's masterful manipulation, you can tell all the suckers who see you on TV one thing while saying something completely different to your subscribers.  Hedge funds do this all the time and Jim Cramer wrote the book on using the media to manipulate the markets.

Also working hard on the side of the bears is Republican Senator Dick Shelby who said of the banking industry on ABC's "This Week" on Sunday morning: "Close them down, get them out of business. If they're dead, they ought to be buried," Sen. Richard Shelby, R-Ala., said Sunday on ABC's "This Week." "We bury the small banks; we've got to bury some big ones and send a strong message to the market."  Just in case that didn't get enough panic over the weekend, John McCain was "on message" on "Fox News Sunday" saying: "Some of these banks have to fail."  McCain, if you've noticed, is STILL campaigning against Obama…

As I said during Friday's live broadcast: "It's a depression, people are depressed" – that's what a depression is and the market manipulators are feeding off investors' fears to chase them out of the market, to force a bottom that is low enough for them to swoop in and buy, after which point they will turn around and tell you what a wonderful investing opportunity it is and how buy and hold is the new way to go.  This is the same playbook that is used over and over again in economic cycles but, sadly, it works every time – so far be it for us to stand in their way.  As I said in my 2007 article on market manipulation: "It doesn’t matter if the market is gamed, as long as we know what the game is!"

The game this weekend is to force us back to Friday's lows pre-market.  Bloomberg has a headline: "Depression Dynamic Takes Hold as World Trade, Banking Systems Revisit 1930s" although, if you read the article, none of the actual definitions of Depression are anywhere close to being fulfilled.  I'm not going to even bother making a bull case – we're just going to go with the flow but we will be expanding on the concept that staying 55-60% bearish as the market goes down allows a virtual portfolio (at 60% bearish) that was balanced $60K bearish and $40K bullish to gain $4,000 on a 20% drop in the market.  Re-balancing that $104,000 to 60/40 again puts you at about $62,000 bearish and $42,000 bullish and a 20% move back up (assuming you take no action) puts you back to about $50,000 bearish and $50,000 bullish – no gains but no loss either.