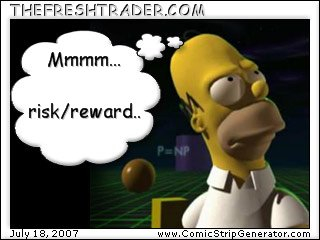 Wheee – this is getting to be fun!

I spend most of my time with members preaching LOW-risk strategies so it’s fun to look at a riskier one once in a while.  If the market is trending higher then we may have an opportunity to make a nice, fat return and we’ve already locked in a conservative set with a lot of cash on the side so we’re able to consider taking a little gamble now.

While we still have a nice, fat VIX at 30, let’s look UP for a change and think of some small, fun plays we can take that give us great expectations for the end of the year.   As I mentioned the other day, putting just 10% of your virtual portfolio into a risky play that makes 500% to the upside can be a real virtual portfolio booster.  The trick here is to select trades that either limit our downside or have downsides we don’t mind (like having a stock put to us that we don’t mind owning).

I thought it would be fun to set up a small, virtual portfolio with a few selections we think can provide big returns by January expirations.  Keep in mind that these are, of course, high-risk positions and should not be more than 1/10th of a virtual portfolio so if you have $10,000, just $1,000 should go into risky posiitons like this.  If all goes well, you still make 50% on the whole $10,000 so DON’T BE GREEDY!  We’ll track this set of picks going forward and make adjustments, if needed along the way.

Let’s start with a stock.  As you know, I am NO fan of penny stocks.  I pretty much avoid them like the plague but there’s a stock that costs just 21 pennies I’ve decided I like and that’s YRCW.  YRCW is an unintentional penny stock and they do have many, many issues that may cause them to go BK BUT – they also have $5.2Bn in revenues against a $214M market cap and, if they don’t go bankrupt, then someone may decide to buy them, probably for more than $1.

Freight volume for truckers was up 0.9% in April after being up 0.4% in March and the Freight Index is now at 110.2, the highest level since Sept of 2008, when YRCW as stilll a $10 stock (but on the way down).  YRCW says they broke even in April and should MAKE MONEY in May – Yet you can still buy them for .21!  "The business has stabilized and is now growing,” Bill Zollars told a group of analysts."

C is always making these lists as we really think they are too big to fail and we also think all the bad news is out at this point and, so far, we’ve done very well with that bet.  Now, keep in mind that this is in the context of GAMBLING with a small part of a larger virtual portfolio that is mainly in cash so our play on C is going to use the margin, but not the cash from the main virtual portfolio and our downside is that we will end up buying C in our main virtual portfolio: TASR is my stock of the decade and I know they are off to a terrible start but here is my buying premise for TASR.  First of all, LONG-TERM, think of Star Trek, who are pretty much intergalactic policemen who run around shooting anyone who looks at them funny.  They shoot so many people they even shoot each other once in a while but it’s OK.  Why?  Because they set their phasers on stun!  Now, imagine they are in some kind of disagreement with people who are too blue or too green or whatever and everyone is stunning away and then one of the officers whips out a 44 magnum and blows someone’s head off.  That would just not be cool, right?

Taser has been plagued by lawsuits by people who were stunned and injured and they have won them all.  I predict the next wave of lawsuits will come from people who were shot rather than Tasered, who will sue the police for NOT Tasering them.  This will force more police departments to adapt non-lethal tech and the, of course, there is global riot control – a very fast-growing sector.  So I like TASR if things get worse and I like TASR if things get better so we WANT to have them in our main virtual portfolio, which means we can afford to take the following gamble:

BP is EXTREMELY risky and January is a tough time-frame to bet on improvement BUT, we can sell the Jan $17.50 puts for $2 into this panic with the stock still at $32.78 and TOS tells me the net margin on that is $644 so we can collect $2,000 in cash and set aside $2,644 in margin off our main virtual portfolio for the obligation of owning 10 shares of BP at $17,500.  BP currently pays a $3.36 dividend and, even if they suspend it and pay $50Bn in damages (the most ever paid for anything by anybody), they would still be back in the black in 2013.  It is not in the interest of anybody to shut them down and the UK government is going to bat for them and Obama is known for talking loudly and carrying a very little stick so I think this is a reasonable gamble but, if BP can’t hold $30, we should probably ditch this one.

XLF is a little scary as they fell all the way to $5.74 in March of 2009 but that didn’t last long and we were happy to double and triple and quadruple down there as a bet against the total collapse of Western Civilization (that’s not until 2012).  Now that we’ve tested this February’s lows, the fact that we can sell Jan $15 puts for $2 is very appealing.  Like the BP play, the net margin is reasonable ($1,310) on 10 sales, so we collect $2,000 and set aside $3,310 in margin and now we look for something to buy:

Phil – Under the premise of gambling and since I am new to the site and options, I was hoping for some clarification. I looked at ARNA, Pharmboy and OpTrader recommendations at least at some point. Stock is at $3.00, Jan 11 $4s are at $1.05 and I was looking at a Buy/Write (since I have never used margin). My calcs say I am protected down to $2.00 with a possible return of $205 per contract (minus commissions) if called away, which wouldn’t bother me. I am just paper trading for now (and probably for a while to come) but wanted to have my numbers checked in case I still don’t fully understand the math.

mtj – you are correct on the numbers.  My caution on biotech is:

The stocks are highly  manipulated by hedge funds and big traders.  I ease into them by 1/4 to 1/3 buys.  I used Opts strategy for buying the stocks and then sometimes cover and let them get called away to protect my gains, or sell puts to get a better price on my original entry (if they have options).

FDA for the company and competition can affect the stock price considerably.  Should VVUS get approval, I see ARNA going down further (VVUS date is next month for the safety committee).  Vice versa if VVUS is rejected.

Conferences (esp. big ones) can also cause euphoria and then stagnation/deflation in the stock price.  Take DCTH for instance.  Up to their data and the cancer conference (ASCO), the stock tripled.  it is now down 33% from 15 in a week.

I need to set up a spreadsheet similar to what Opt has for dates of FDA and conferences, as I have  hard time remembering when all these dates are as well.   I will look into it.

Pharm – Thanks for checking the numbers and the wisdom. Both are appreciated.

So, Phil, I’m moving 100k from a CREF account into an IRA (not with TIAA/CREF, thank you) and plan to shuffle 10% of that off into a regular trading account so I can follow along on these plans. Looks like fun. My one concern is, I plan to hop over to Korea to the family orchard for at least 3 weeks in November. While Korea is certainly well-connected, last time I was at the farm there wasn’t yet a hook-up. I could probably find a local PC-bang or something, but, long question short, how much watching will these eggs need?

Yo, Phil – update on this? I assume you knew about the proposed YRCW reverse split? Still like BP in this play? Anything to add, ‘cuz it still says "in progress".