Wheeee, everything must be great!

We are crushing our levels as the market flies ever higher.  Our 11,500 target on the Dow looks sure to be tested and we're already flipping bullish with our "Breakout Defense" trades, in which our goal is to make 5,000% in 5 trades or less.  We are not ashamed to jump on the bullish bandwagon – if they are giving away money, we'll stand in line with everyone else, only we'll take a larger share – thank you very much.  We certainly know how to use leverage just like a Bankster – we have a spread and we're not afraid to use it!

Speaking of Banksters, the must-read article of the weekend is the NY Times piece that goes into surprising details of secret bank meetings that are regularly held in NY where the Gang of 12 (just 9 of them) do their best to manipulate the derivatives market, influence regulations and regulators and, of course, crush their competition.  The article even goes so far as to name my old friends at ICE as possibly maybe having something to do with these shenanigans and I am SHOCKED at these allegations as the good people at ICE were so good about telling me how I had things all wrong when I made similar statements last year (which I now legally know cannot be proven and therefore must not be true).

And thank goodness that the commodity and derivatives clearinghouse that was founded by Big Banks and is controlled by Big Banks cannot be proven to be operating in favor of Big Banks because we wouldn't want to think that the Big Banks had some preferential treatment (beyond the access to the discount window and the TARP money and the POMO money, etc.) – that would just be unAmerican.  By unAmerican, I mean the old America that they write about in the Declaration of Independence and the original Constitution, of course – not the Corporate Kleptocracy this country has developed into.  Under the new guidelines, leveraging your influence and having the government rob the people to increase your profits on which you don't pay taxes is the very definition of patriotism, isn't it?

Ah well…  As I said last Monday, this is really Somebody Else's Problem because we are in "get it while the gettin's good mode" at the moment.  So we're not going to dwell on the negatives and we will, instead, accentuate the positive as sell our premiums to Mr. In Between to fund our bullish plays.  Our first two bullish plays in this series are already a week old as I put up trade ideas on DBC and FAS in the December 3rd morning post.

While the FAS trade is already getting away with an 833% gain in the first week (out of 3,233% potential gain by April if the XLF keeps climbing), the DBC trade idea is still playable as commodities haven't quite run away just yet.  As you can see from the VIX chart on right, market complacency may be peaking or the fabulous Obama Administration may have truly eliminated all the potential economic negatives in just two short years – INCREDIBLE!

Unfortunately, China does not seem to be as lucky as we are to have such tremendous leadership that all of their problems are solved and just this weekend they reported shocking 5.1% inflation – if by shocking I mean pretty much totally ignored by the US MSM.  The inflation was not, however, ignored by China's own Deputy Director of the Finance and Economic Affairs – He Keng, who was reported as saying that China began experiencing a period of stagflation in the second half of this year with high inflation and unemployment. The nation will also face the possibility of an economic double dip next year, the Guangzhou Daily cited He as saying at a meeting yesterday.  That's STAGflation, as in stagnant economy, not the more benign INflation, as in the stuff the US pretends doesn't exist.

The dollar is down on excitement about the Obama Tax Cuts moving through the Senate today and the House is now expected to pass tomorrow so there's $1Tn worth of new debt we'll be taking on.  At the same time, the EU has been making moves to stabilize the Euro and it's expected that, by the year's end, there will be a fund bigger than the current $1Tn bailout fund the EU currently has at its disposal.

Meanwhile, the Shanghai Composite leaped 2.9% this morning and led Asian markets higher as an anticipated rate hike by Beijing seems to have been put off until at least after the holidays.  Lack of tightening by the PBOC gave commodities the green light to fly higher with both Jiangxi Copper and China Oilfield Services hitting limit up at 10% this morning.  Investment sentiment in the region was also helped by Wall Street's gains Friday after data showed that U.S. consumers were more upbeat on the economic outlook in early December and that U.S. exports in October surged to their highest levels in more than two years.

One short we will be taking today is oil as that is just silly back over $89.  We have a standing entry to short the Futures but USO puts should be attractive at $38.50 on that ETF as there are still 550M barrels on pretend order for the three front months at the NYMEX with 194M barrels scheduled for January delivery to Cushing, OK – a facility that has a capacity of 45M barrels and happens to be full.  Those contracts that are still open next Tuesday must be delivered and, with the January contacts at $89 and the June contracts at $90.08, it's hardly worth storing oil for 6 months to make $1, is it?

As I pointed out to Members this weekend, there's no point in being skeptical when the Gang of 12 is determined to run the markets.  Just this morning the big gun analysts weighed in at Bloomberg with an average forecast of 11% gains on the S&P in 2011 (about 1,379) with Goldman's own David Kostin leading the bull charge with a 17% rally target.  Readers of the WSJ this morning were treated to GDP upgrades from the economists they polled with 3% growth now expected in 2011.  GS is also targeting index movers like AAPL for big upgrades – just what the doctor ordered to push the Nasdaq even higher..

Yep, things could not possibly be better, I suppose – and that's what scares me!

Good morning!
This is too ugly to use in my post but a great chart:

Dollar starting to look dangerously weak again (but also possibility of 78.50 making a higher low in an uptrend:

This makes it very hard not to like TBT! This one is interesting: 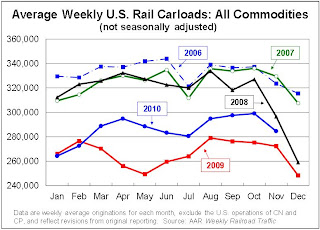 Phil –
Can you explain the e-mini chart further. How do they determine buy programs?
The more I read non msm stats the more worried I get.
Rail cars is really bad

You mentioned that there was an Excel spreadsheet available for B/W.  Would you point us to it??

"Some of our members are very strong on buy write, which should be the fundamental base of a portfolio. We do have now a excel calculator on B/W. , A combination of effort from various members. You just need to check when entering a B/W that your basic profit is over 3% per month so it does not help to set up these plays for many month ahead if your return is less as well as you are exposed for a longer time! Stock paying a good divident will not pay very much for the callers. But you always can combined the interest together with the pay on the short caller."

interesting idea – go long KRE eft in case of short squeese.  see note below from ZH.
Yet what may be the most curious datapoint is that the shorts outstanding as a percentage of float in the KRE ETF (the KBW Regional Banking ETF) have exploded from 13.2x to 24.6x! This means that there are 24.6 more shares short this ETF than there is daily volume. Should there be a forced squeeze in KRE, the intraday stock price will likely make the Volkswagen short squeeze seem pale in comparison.
http://www.zerohedge.com/article/most-shorted-nyse-stocks-citi-shorts-plummet-spy-becomes-most-shorted-security