Monday Market Movement – Strap in for a Wild Week!

This chart from the NYTimes pretty much says it all: 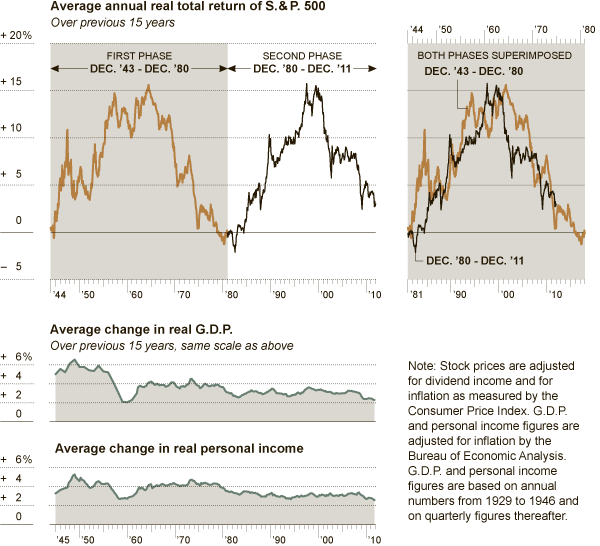 The average annual inflation-adjusted return for the S&P 500 has been in decline since the late 90s, the decline only paused in the 00s and that fooled us into thinking it was a recovery but we only stopped getting worse for a while.  Meanwhile, real personal income has been in decline since Nixon lifted the gold standard in the early 70s and that, like our real GDP adjusted for inflation, should certainly not be the "envy of the World" – even if we assume it still is. $20Tn was pumped into our $60Tn Global Economy since the 2008 crisis and that is not including "stealth" stimulus like the estimated $8Tn handed out by our own Fed to their Bankster buddies as well as tens of Trillions handed our around the World by other Central Banks.

Like the late 70s, my expectation is that we will see a bottoming of real stock returns over the next few years as the inflation train pulls into the station.  The markets will do great on the surface but, underneath, they are not going to be able to keep up with the massive inflation that is likely to begin as the flood of money being used to "fix" the global banking system begins leaking out into the Global Economy.

Speaking of fixing the global economy – Merkozy are holding a press conference this morning to craft a "master plan" for rescuing the euro over the next three months. The two leaders gather in Berlin to flesh out a new rulebook for fiscal discipline negotiated at a Dec. 9 summit that seeks to create a “fiscal compact” for the 17-member euro area. 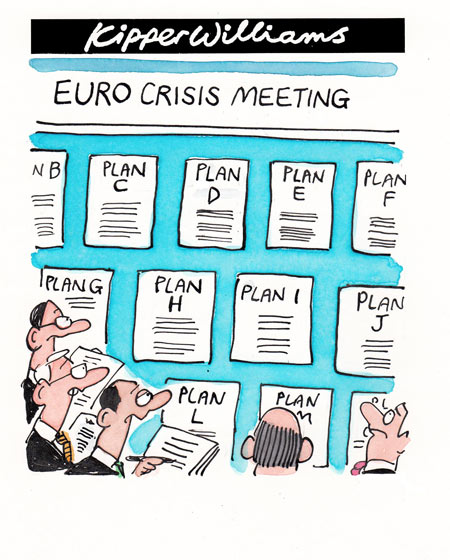 The German and French leaders have sponsored a plan to install new guidelines by March. A crisis that began in Greece more than two years ago has moved to the euro area’s core, and leaders are struggling to persuade investors they can contain the risk and assure the euro’s survival. “They urgently need to formulate and clearly communicate a vision for a sound and stable euro area that deserves the name fiscal compact,” said Thomas Harjes, senior European economist at Barclays Capital.

Meanwhile, the Euro fell to an 11-year low against the Yen and a 16-month low against the Dollar this morning ahead of the meeting but the Forex markets have since calmed down and we are back to where we were last week – which is just extremely low.  “We’re going to see more ongoing political noise and that’s really just a distraction from the bigger driver of the euro, which is the relatively weak growth outlook,” said Mike Jones, a currency strategist at Bank of New Zealand. “As long as European growth underwhelms, the euro will continue to underperform the U.S. dollar, yen and probably also the rest of the major currencies.”

Why do we care so much about Europe?  Well, for one thing, Corporate Profit growth is now at a 2-year low as the U.S. feels the EU drag, according to Bloomberg.  U.S. corporations ended 2011with the slowest profit growth in two years as the "mending" US economy was met by a European slump that vexed companies more tied to global sales  S&P companies may have earned $24.74 a share in the fourth quarter, according to analysts’ estimates compiled by Bloomberg as of Jan 6th.  That would be the smallest percentage gain since September 2009.  “Slowing global growth, some impairment of export activity to Europe and perhaps even the rise of the dollar collectively have begun to sort of work against the multinational story,” said Mark Luschini of Montgomery Scott. Over the weekend, the Fed's Bullard fired the first bearish salvo of the week by saying QE3 is not likely to happen but qualified it by saying "given the data."  As I pointed out last week when analyzing the Fed minutes (see this week's Stock World Weekly for all the notes), the data has done quite a reversal since their last meeting so you can interpret his statement as you like as we await the more negative words we are sure to get from Charlie Plosser Wednesday at 12:30 – just ahead of the 10-year note auction, when the markets are scheduled to give us the lows of the week.

Until then (and the Beige Book at 2pm that day), we will be watching and waiting to see which way things seem to be breaking.  At the moment, we have placed our wages on both sides of the table but, unfortunately, last week's action ended up neither up or down, which is better for our large portfolios – where we are the house, but not so good for our smaller, short-term portfolio, where we are the suckers paying premium.

Lesson to be learned – never be a small investor!  This can be avoided by being a saver until you have a large enough amount to invest seriously but we always have a rougher time getting our virtual $25,000 Portfolios off the ground but, as I said above, last week and today should be the calm before the storm and we're expecting a pretty serious drop between tomorrow morning and Thursday so let's enjoy the morning pump while we can and take the opportunity to press our shorts!

Speaking of fish oils, a university in Taiwan has successfully used salmon DNA to create a data storage device and could be a cheaper alternative to silicon:

I can imagine the help center calls now: "Uhhhh, is it normal for my hard disk to be lying dead in a river?"

DIA/Lunar – At about 10 am we'll make that decision.  Likely we'll get a cheaper entry.

I hope its a sell into the excitement day

Scaling into short DOWs from current levels and up (do I need my mind examined?).