Where do we go from here?

We had a very busy weekend at PSW as we're getting ready to move forward and launch our Portal Project and we also took a little time to look back and review our July trades (Part 1) (Part 2), though we're not done with Part 2 yet as it's a big job – there were 42 trade ideas in Part 1 alone that were not part of one of our usual virtual portfolios (Short-Term, Long-Term and Income Portfolios).

We still found time for our usual weekend reading and chat at the end of Friday's post and, of course, this morning's news is there as well.  Nothing too Earth-shaking happened over the weekend and oil traders are very disappointed we didn't have a terrorist attack yet and August contracts look like they are failing the $106 line on (/CL), where we like it for a short play with tight stops over the line.

As noted on Dave Fry's USO chart, it's "surprising" to see oil so weak after a technical breakout with all the news about possible terror attacks and Egypt, etc. but those are just short-term Fundamental issues while the longer-term, BIGGER Fundamental picture is that "THEY" (OPEC, Non-Opec, US, Canada, Mexico, Venezuela, Russia) are producing more oil than we're using and our stockpiles are going up and up and up.

At a certain point, something has to give.  The reason oil got to $140 in 2008 was that George Bush not only handed out stimulus checks in the Spring that were used to pay for gas all Summer but GWB himself BOUGHT 200M gallons of oil, at ANY price (about $26Bn of your tax Dollars), and stuck it in the ground (our SPR) to create a false demand while his war machine was in Iraq and Afghanistan burning 1M barrels of oil a day while simultaneously crippling Iraq's production capacity.  That's +565Mb a year of oil used by just one guy!

One guy with an unlimited budget (our National Debt) is not the same thing as trying to charge 2Bn Global drivers $4 a gallon for gas (more in other countries) for any length of time.  We're already seeing the distortions show up in Retail Sales patterns, as well as manufacturing costs (even XOM and CVX lost money buying oil for their own refiners last Q!).

We had a strange combination in late July of rising oil and falling gas.  That's because the rise in oil was fake, Fake, FAKE and I kept saying as much and we kept making very nice profits trading those oil Futures as we took advantage of the daily shenanigans.  We feel bad for participating – but we did at least write to our Congresspeople to see if they'd do something to stop it.  No luck so far…

Once again, in Q2 of this year, almost the entirety of sales growth is coming from Financials and the Energy and Utility markets they manipulate.  Oddly enough, as noted above, the Energy companies haven't even been benefitting from the higher prices, with earnings down 10.1% in Q2 so far (most reports in) while Financials earned 6.9% more money on 5.7% more revenues and, of course, Health Care ALWAYS wins, with a 4.5% earnings increase – even though they only had 0.4% more sales.

I'm not going to rant about this, Barry re-posted a great summary of all the different things that are manipulated by the Banksters from Washington Blog and, if you haven't read it – I really suggest you do.  Steps are finally being taken to reign in some of this madness but it may be too little too late or, even if not, what happens to our Economy if the Banksters stop making money? 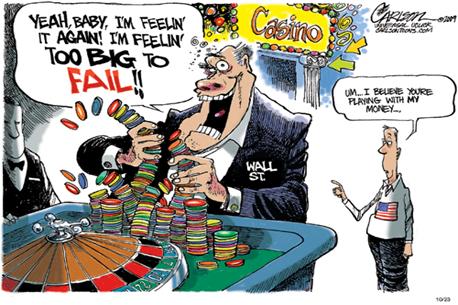 In theory, all those ill-gotten gains will flow back to the companies that actually make goods and services in this country and those companies can begin hiring and the country can prosper but, in fact – it will likely be like 2008 all over again and the Economy will freeze and then collapse as liquidity dries up once again.

We did NOT get more stimulus from the Central Banksters last week and things are heating up in Europe with Merkel heading into an election in Germany and Italy's Government on the verge of colllapse.  Of course, no one in America cares what's happening in Europe or, as Scottmi pointed out this weekend, no one in America is allowed to care what happens in Europe because our MSM simply refuses to discuss it, as evidenced by this view of 4 of this week's Time Magazine Covers from various parts of the World:

It's surreal, isn't it?  And don't think it's a one-time thing – your throughts are CONSTANTLY being manipulated by the Corporate Media in this country.  Speaking of the Corporate takeover of our once-free press – the Boston Red Sox's Billionaire owner, John Henry, has bought the Boston Globe from the New York Times for $70M (which I heard he found in his couch).  Not only will we no longer hear what's wrong with the team from the Globe, but Henry now has control of Boston.com, the Worcester Telegram and Gazetter, a 49% stake in Metro Boston as well as 100% of GlobeDirect – a direct-mail marketing giant.

Our rah-rah Corporate Media blitz drove a record $40.3Bn into US Equities in July while Bond funds lost $21.1Bn.  According to TrimTabs, more of the money that has come out of bonds is being held in cash rather than invested in the equity market.  In the eight weeks ended July 22, $110.9 billion went into savings deposits, while $32.5 billion entered into retail money market funds.

"There is definitely a 'rotation' underway in the investment world, but it is premature to call it 'great,' and the 'rotation' is funneling more money into cash than equities," TrimTabs said.

"Given the lofty valuation of the U.S. stock market, we cannot blame investors – particularly those with a long-term outlook – for favoring cash over stock. From a contrarian perspective, it is extremely bearish that so much money is pouring into U.S. equity ETFs," it added.

The S&P 500 is trading at a price-to-earnings ratio of 17.7, compared to 13.6 for the U.K.'sFTSE 100, for example.  According to American financial services firm PNC, which published a report titled 'Invincible Summer' over the weekend, the market looks fairly valued given better economic data and positive earnings. In the second quarter earnings season, more than half of the companies that have reported have beat estimates, according to Reuters.

It's still up to the Fed whether or not we can keep this bubble inflating for another month.  If last week's move was fake, we'll see signs of it this week but, if not, we have no choice but to take some long positions.  More on that in Member Chat this morning as it's time for the bell!

Thanks for Guggenheim, ZZ.

TSLA/Wombat – The bear put spread is a simple downside bet with limited loss and has the advantage, if TSLA pops, of letting us pull the $130 puts, for hopefully $15 or better and leave the naked $100 puts.  You're not forced to own TSLA with the spread, you can't lose more than $15 and you make $15 if it goes lower.

Big Chart – Clearly, gravity is not a factor here.

TSLA/Newt – Because we might be wrong.  That's the point of the bull spread, you make a little money on a move up to help pay for the roll and, on the way down, we're so heavily short that we don't mind the small loss on the hedge.

MON/Scott – Amazing, isn't it?  If they don't get them this time, they'll just keep buying judges and politicians until they get the "right" decision.   Corporate Citizens are immortal and have lots of time and they are very, very rich, so they can use their money to buy the system in the long run.

Buttons/Deano – I'm not seeing anyting strange.  Can you be specific about what's not working?

AAPL/Albo – It's a bargain if you buy the $400/550 bull call spread for $60 and make $90!  People are just way too greedy AND impatient – not a good combination.  The reason I was banging the table on AAPL is because it's a relatively safe way to make 100% off those lows and I consider it a BENEFIT that it's so boring.  Boring is good!!!

Credit/ZZ – I hope that's true but I think people are borrowing to offset rising food and fuel prices as well as make up for net income shortfalls from the rising taxes.  Many homes are still underwater and, until we fix that, it's going to be hard to do more than very short-term bursts of enthusiasm.

PCLN/Winston – Great example.  That's the thing I can't teach people – experiencing the adjustments over time.  As you say, you have to get through that pain barrier and go with the flow but, unfortunately, most people bail at the barrier.  Good luck on the earnings – hopefully there will be some excitement to sell into.

Oil pushed up to $107 – that's been a better shorting spot than $106 (/CL) but, like yesterday, very tight stops over the line as we had two .50 pops yesterday before we got a proper pullback.

Bezos buying the Washington Post !  Guess the rich must have their toys.