Fed Up Thursday – More of the Same

How many times can you read the Fed Minutes and FREAK OUT?  And then jump for joy?  And then freak out again?  Really???  Don't you look at this chart and wonder what kind of idiots your fellow invesors are?

It's scary out there, that's for sure.  StJeanLuc pointed out in Member Chat last night that 29% of Louisiana Republicans still blame Obama for the Federal Government's botched response to Hurricane Katrina.  Another 44% aren't sure whether it was Obama or Bush (the guy who was actually President at the time).

That leaves just 27% of Republicans in the great state of Louisiana who, given the clear choice of two people who could be at fault (otherwise many would have chosen Carter), were able to correctly name the person who was actually in charge.

These are the people (well, the top 10% of them) that you are trading with!  They're not just irrational, they actually BELIEVE things that simply are not true.  It doesn't matter what Paul Krugman says or how well he says it – 73% of those people won't believe it anyway.

As I said in the morning regarding the sell-off ahead of the Fed Minutes at 2pm: "This can be quickly reversed by the Fed or, more accurately, by Hilsenrath's interpretation of the Fed Minutes in the WSJ, minutes after they are released."

We had that little rally from 2:00 to 2:50 (see Dave Fry charts) but, at 2:50 I warned our Members that it was "All Hilsenrath on this rally," referring to the WSJ's Jonn Hilsenrath's doveish spin on the Fed Minutes.  Rather than let him force us out of our short positions, we covered with FXI And EWJ longs but we quickly took losses on those and got bearish again, once the "rally" subsided.  By 2:59 I was already warning our Members:

No real volume to this move – now 59M on the Dow at 3.   That means this whole "rally" could reverse really quickly into the close – as did yesterday.

At 3:02, watching the Dow I noted: "Rejected at 15,000 – I regret the longs on FXI and EWJ already!"  As I said, we took the bullish covers so we wouldn't have to change our short positions.  The idea was to ride out a silly rally based on a very doveish spin on what GS more accurately summarized as: "generally consistent with our view that tapering of asset purchases is likely to occur at the September meeting." I know, it makes your head spin.  Don't blame me – I already said in July that August would be a good month to cash out and take a month vacation – I have to be here, it's my job – what's your excuse?

Since we do have to be here, we went short, as down is more likely than up at this point.  But down doesn't mean straight down every day.  Looking at the Big Chart, there's plenty of damage being done – despite the low-volume "stick saves" that come on a regular basis either pre-market or intraday. 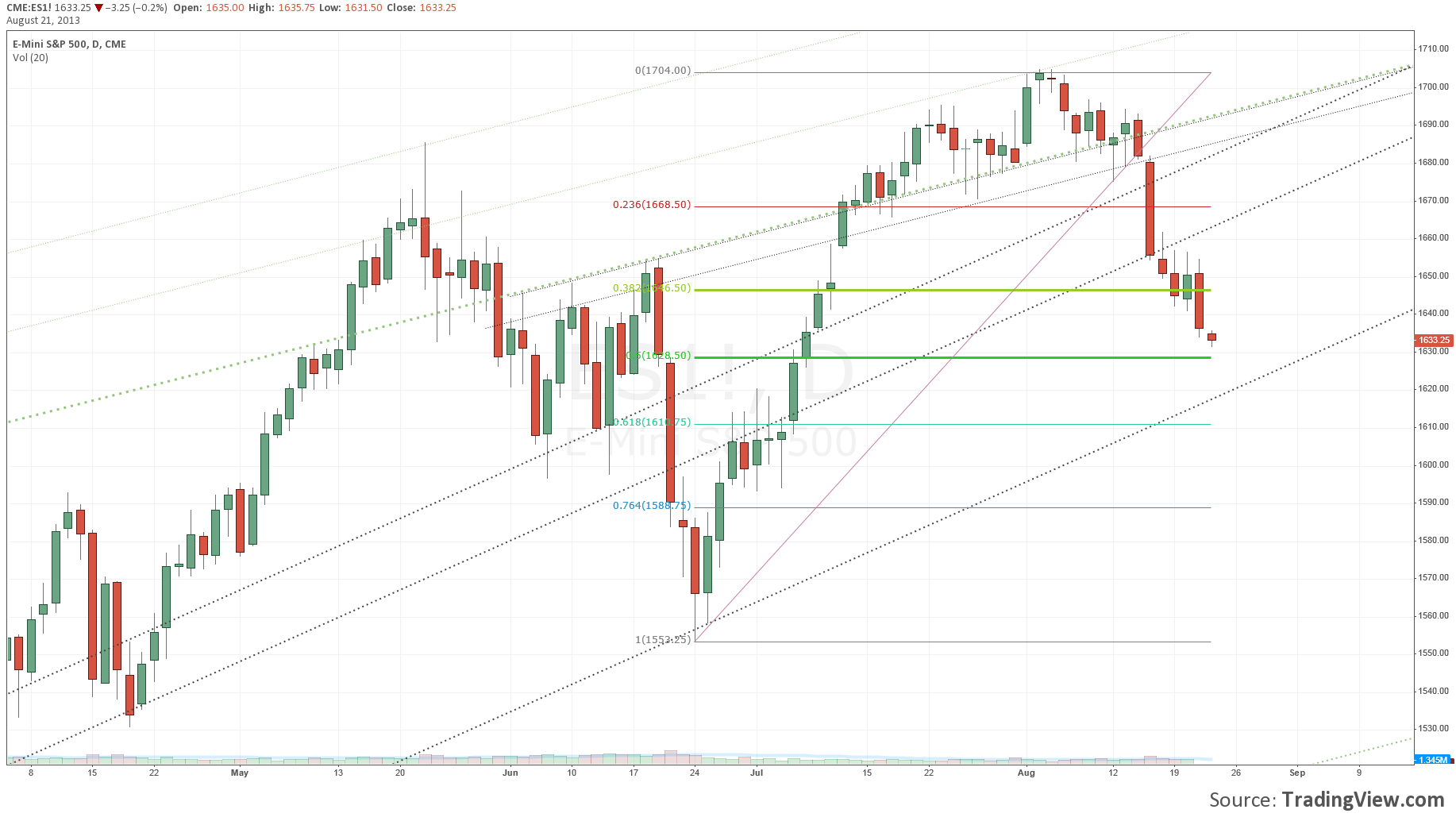 We'll see how the Dow handles 14,960 this morning but it's the S&P that usually gives us a proper indication and there we're now looking for a 14-point weak bounce off the 1,640 low and, if they get back over 1,654, then 1,668 is the next hurdle and anything less than that by tomorrow's close will keep us bearish into the weekend.

Not that we're not finding any bullish plays.  In fact, we even flipped bullish on Oil Futures (/CL) at $103.50 (until 10:30, when we get the Nat gas report) and we shorted again at $105 and $104.50 for a lot of nice, little gains already this morning.  It's a tight range but fun to play for quick, little gains this early in the new contract session (very tight stops, of course).

This week we aready went long in Member Chat on RIG, NLY and DIS for long-term longs – so it's not like we can't find ANYTHING we like – just that it's slim pickings and we prefer to be cautious at this market inflection point.  If the news-flow changes (and it hasn't as of our morning review), we'll be thrilled to get more bullish but, at the moment – I'm sorry to have to keep being negative.

On the bright side – you still have two weeks left in August to take that vacation!

Fascinating photos of lawyers in action.

Expedia (EXPE) has reached a long-termr deal with Travelocity (owned by private travel giant Sabre Holdings) to "power the technology platforms" for Travelocity's U.S. and Canadian sites, as well as to provide its travel inventory and handle customer services. The deal is expected to go live in 2014.

In an 8-K, Expedia discloses Travelocity will be paid affiliate marketing fees for Expedia bookings made through its sites, and that Expedia could have the right to buy certain Travelocity assets down the line.

"It’s a virtual merger," says travel analyst Henry Hartveldt. "It’s as if Costco said it would source everything from Walmart and use Walmart’s ordering system and inventory management system and everything else."

The deal stands to give Expedia more scale as it continues battling with archrival Priceline (PCLN) in a very competitive North American travel bookings market.

pstas – please tell me who wrote that so I know who to avoid reading, thanks!

Shanghai and Hang Seng ended up flat and Nikkie was actually flat too (in the Futures) even though it shows a 300-point gain because, in reality, that's where they opened after being goosed up on our session.   The Chinese markets, on the other hand, both sold off into the close.  The WSJ turned a critical eye on China this morning:

The Wall Street Journal takes a look at the Chinese financial system where debt has surged and cracks are beginning to show.

India bounced back 1% but that's based on Central Bank fiddling that may or may not work.

Europe is more oe less flat on not much news, as are our Futures, which is normal for a Friday in August.

Mubarak was freed in Egypt but still under house arrest.  The Muslim Brotherhood is calling for a "Day of Martyrs", which sounds ominious and the fact that it's not making oil jump is very encouraging, though CNBC hasn't begun pumping up the fear factor yet.

Meanwhile, Jackson Hole is on and the markets aren't flying up yet.  Don't forget that we've made our bounce gains in anticipation of kind words from the Fed and I still think, if they don't come through – the markets will be disappointed.  I'll lay out the strong bounce goals in the morning post.

Oh, and this is interesting:

Big Chart – It's nice to have a picture of what a weak bounce looks like.  The RUT, by comparison, is a strong bounce, as is the Nas at 3,640 (as predicted Tuesday morning).  We factor in time (how long did it take to bounce vs how long it took to drop) and volume as mitigators but, on the whole, we're looking for 3 of 5 strong bounces to get back to bullish but OVER the strong bounce line and THEN we look for 50% retraces after that to prove we should be bullish.  This is the same thing that kept us from falling for the last bounce so let's take it seriously.

Organics/Burr – I wouldn't even want to open a business these days that didn't cater to the top 10%.

Grantham/StJ – I was very impressed by that interview.

TGT/Jfaw – Hard to love in a toppy market with oil over $100.  Consumers are really hurting (also, Health Care costs are still insane, see above) so I'd rather wait for a proper sell-off and not try to catch a knife while they're in the middle of dropping.  Nothing too bad about a $55 1x entry, of course – it's a fine long-term hold at that price but I'd wait until next week, at the least.

11 Minutest/Scott – I thought those were amusing.   I didn't understand why Vine was so popular and, frankly, I still don't as I wouldn't want to spend 1,000 hours just to end up with that 11 minutes but at least now I see what people do with it.

Confusion/Pstas – The bottom 80% don't consume much anyway.  It hurts WMT and TGT, etc but that -6.1% of household income means that if payroll is 30% of a company's expenses then they save 2% on payroll but net profits are just 20%(ish) so it's a 10% boost to net profits and there's the entire gain in Corporate Profits – squeezing it out of the workers!

The problem is, you can't do that trick too many times before you destry the entire economy.   In the early stages (we're in the middle now), the money funnel from the bottom to the top is a boon to the top 10% (and trickles back to the 20%'ers) and their spending offsets any cutbacks made by those at the bottom (and the Government steps in with Food Stamps and Unemployment etc to keep things afloat).

Each cycle though, these is less and less to squeeze and the benefits dry up and the base begins to crumble – thats about where we are now but the top 10% are still rolling in cash and we employ the next 10%, so they don't look like they're hurting to us but soon they'll begin to feel it as no one has money to buy from them.

COMCAST having some system related email problems. No service in the chicago market; also told that Michigan and Florida affected- may be more widespread.

"I think they should literally put a monkey in charge to test my theory that a chimp could do a better job at running the company than Steve Ballmer."  Thanks, Phil, I need a laugh after having to roll my TSLA puts up to Sept.21 180s!!