If what goes up, must come down – oil has a LONG way to fall: As you can see, during the glorious Clinton era, oil prices generally stayed down in the $20s despite OPEC cutbacks (because Clinton counteracted them by releasing oil from the SPR), hurricanes, tornadoes, wars in the Middle East (we used to win them, you know), etc.  Then, a real disaster struck and oil man GWB was elected to office.

Bush and his Enron buddies destablized the commodities markets (under looser regulations) and Bush started wars in Iraq and Afghanistan to catch Osama Bin Laden, who was in Pakistan and, while he had the US military destroying Iraq's 3Mbd production and burning up another 1 Million barrels of oil a day looking for Osama in all the wrong places, he was also BUYING an average of 500,000 barrels a day to stick in the ground – doubling the size and filling to the brim our strategic petroleum reserve.

That led to a "reserve oil gap" and, of course, other countries began building and filling their own SPRs as well so more oil was bought by more countries, only to be shoved into the ground and never used.  This created a very false sense of demand for oil and, when the price of oil rose to the point where consumers could no longer afford to drive – President Bush gave every family $3,000 to spend on oil – and they did – and oil hit $140 a barrel.  "Cha-ching" indeed! 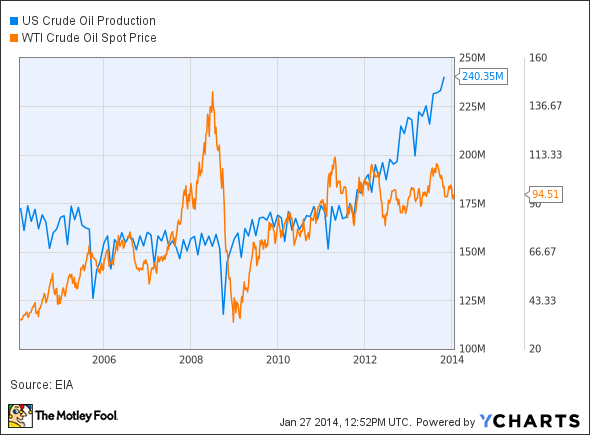 But then the $3,000 was gone and so was the ridiculous spike in oil and it fell and fell and fell and fell and fell – all the way down to $35 before stabilizing for a few months around $40 and then heading back to $80 as the market doubled and then, since 2010, US production has jumped 50% and generally kept oil under $100, despite MASSIVE manipulation by the Banksters (see "Goldman's Global Oil Scam Passes the 50 Madoff Mark").

Now it is falling again and, like 2008, people love to call the bottom every $5 on the way down.  All the same reasons are being used but, in commodities, a glut is a glut and you can't always count on the cost of production to set a floor on the price of a commodity until the surplus is worked off – we're still a long way from that on oil because the demand that the current production is geared-up to serve simply isn't there anymore.

We called a bottom on the Oil Futures (/CL) this morning in our Live Member Chat Room (as well as /TF at 1,150) but we're only playing for the bounce to $81 (weak) or $82 (strong).  Already this morning we're at $81.31 so $81 is now our stop line and the Egg McMuffins are paid for!  I gave my outlook for oil in yesterday's Live Trading Webinar and I'm sure there will be a replay available, so I won't bore you with those details here.

We're very well-covered to the downside and this is where we expect a bounce so the above plays are all about locking in our massive gains we made by shorting ahead of this correction.  In Monday's morning post, for example, we discussed the DXD Nov $26/29 bull call spread at net 0.62, using $5,000 to hedge against a loss this week.  Yesterday, that hedge closed at 0.88, up $2,100 (42%) in two days – THAT's HOW YOU HEDGE!

Whether you are too bullish or too bearish or your portfolio is "just right" and you are looking for new trade ideas – today is a good day to join us in Member Chat as we will be going over our Buy List and rebalancing our portfolios for the month ahead.

By the way, when you are playing a bounce like this, it's a momentum play – you get out as soon as the momentum slows down (/TF now 1,053.50 so 1,053 is the stop) and wait to see the next set tested lower or crossed above before taking another chance.  3 points on the RUT is $300 in 5 minutes – why be greedy?

VIX/Sibe – The VIX tends to make dramatic highs as people panic and then settle down pretty quickly.  Historically, you have to let the spikes play out and then, on the other side, it's usually a pretty easy short. 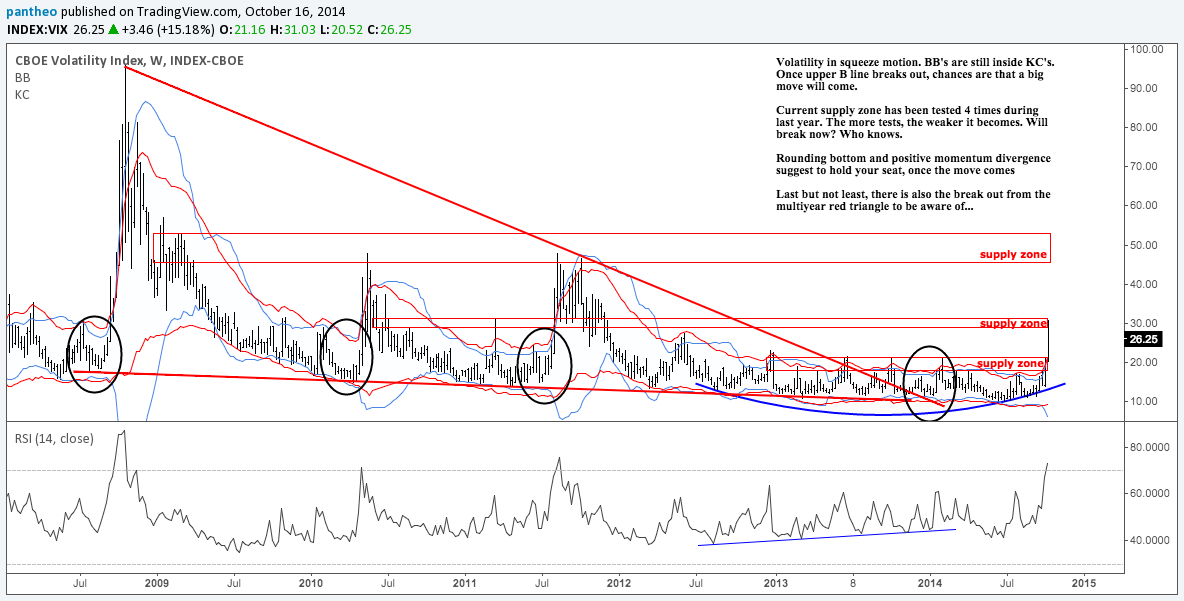 I don't like to play it because the option spreads are ridiculously wide and it's not a very liquid market (so hard to get in and out of positions – especially when it's moving dramatically).  As a rule of thumb, 12 is too low and 30 is too high but that wouldn't have stopped a short from breaking you in 2008 and those who went long on Vol since 2013 have long since lost their money before this spike.

Relax? We don’t think so.

The first half of October and particularly the last five days and today have been brutal for investors who had bought into the notion of the low-volatility “Goldilocks” economy and markets. They have experienced large losses on their highly correlated positions in different asset classes. Indeed, with the exception of government bonds — a generally unappreciated asset class until recently — they have found few if any shelters from the storm. And the market choppiness is likely to continue for what many will feel is an uncomfortably long period of time.

To read the entire article, go to http://bv.ms/1zb9z3l

Sent from the Bloomberg iPad application. Download the free application at http://itunes.apple.com/us/app/bloomberg-for-ipad/id364304764?mt=8

Something to cheer us all up, or at least those who followed Phil's advice to remain "cashy"!

The S&P 500 (SPX) is down 5.6% so far this October. If the month ended today, it'd be the fifth-worst showing since 1950, according to the Stock Trader's Almanac. Over those 64 years, the S&P has declined in October 26 times. Of those 26 instances, November through December has registered gains 21 times, with an average advance of 3.4%. For the Dow (DJI), the numbers are even better.
So keep some powder dry. If you have any powder left.