For my good friend… Imagine if you will, a valuable life experience lesson to be learned from a genetically mutated house cat or perhaps feline familiar?

Point in fact, in European folklore and folk-belief of the Medieval and Early Modern periods, familiar spirits (sometimes referred to simply as “familiars” or “animal guides”) were believed to be supernatural entities that would assist witches and other cunning folk in their practice of magic. A familiar (or familiar spirit or familiar animal) is an animal-shaped spirit or minor demon believed to serve a witch or magician as domestic servant, spy and companion, in addition to helping to bewitch enemies or to divine information. 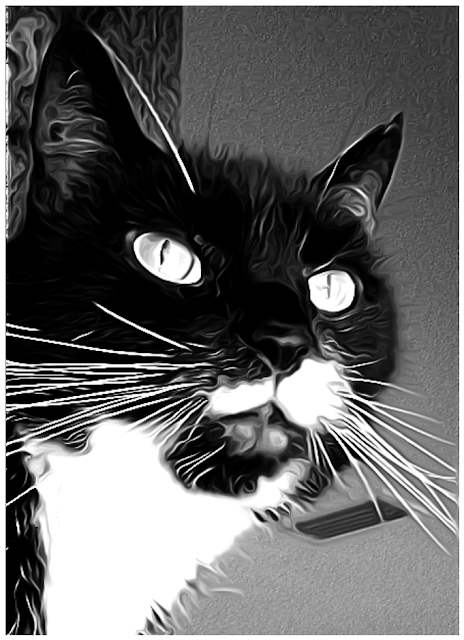 In the last eighteen years, Mistletoe’s (pictured above) earned no less than half a dozen or so nicknames, including her given name. With her plucky resilience, perky sass and pesky persistence, that bobble headed, tuxedo wearing, finely appointed, poly dactyl puss schooled me in more ways than one.

Every morning Mistletoe’s has awoken me with a combination of gentle purring and paw kneading at my chest or plucking at my facial hair or cheek.  The patience of her hunger was only exceeded by her persistence, earning her an occasional pseudo expletive, Mother Plucker.

The word NO, has never been in that plucky pusses vernacular, as she feigns ignorance, stares quizzically and meows sassing you right back. So much so that in order to get the point across, one has to bust out a witches broom to menace her. Earning her first nickname, Sassy-pus or Sass-o-pus.

If you tried to hide something or put it out of reach, this is just a dare for the Sassopus. Being poly dactyl, (26 toes, anterior 8 digits right and 7 left; posterior 6 left and 5 right) the sass master has genetically mutated huge paws, all the better for opening cabinets, snatching, getting into and scaling things. 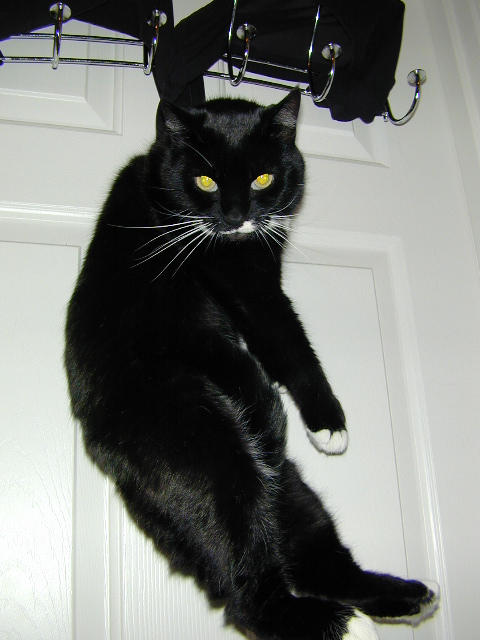 One day, not long after installing screen doors on our 4th floor balcony, replete with a bottom hook latch, that darn cat went missing. A quick interior and exterior scan was fruitless, until I looked at the neighbors balcony.

Due to the alluring smell of roasting chicken, a certain individual had flipped the hook, slid out between the screen doors, managed to traverse the railing between units and was prowling our neighbors balcony.  This necessitated the installation of chicken wire on our railing.  Before we could install a 2nd set of screen door hooks at the seven foot level, we had another Houdini act.

This time, in order to circumvent the chicken wire, a leap up to the railing led to a Flying Wallenda moment. A glance at the edge of the balcony tile revealed the death grip of 15 cat digits clinging for dear life, as two rear legs wildly thrashed to maintain traction on the stucco.  Confirming the “turn of phrase” for her given name MISSLE-TOES and earning her second nickname, The Missle-tonian or The Toe-ster.

During many a bathroom pit stop, the Toaster would concomitantly and synchronously utilize her litter box in our bathroom.  When I was not seated, she was either underfoot or could be found dinking and dancing about directly in my path. Ever perky with ears peeled back, eagerly greeting and hopefully leading one to the cat food supplies, for her immediate satiation.  Earning her third nickname, Ms. Pee-buddy, Dinkle Be, Dinky-B, Miss Di-PEST-OH or the Pied Piper of Cats.

That Miss DiPesto was an ever efficient administrator in the office, a rabid sports fan and video gamer, always wanting my lap in the office and in front of the TV, while constantly purring away. Earning her fourth nickname, Purolator, Purropus, Rumbalina, Rumblepuss or The “Magic Quarters” Massage Admin. 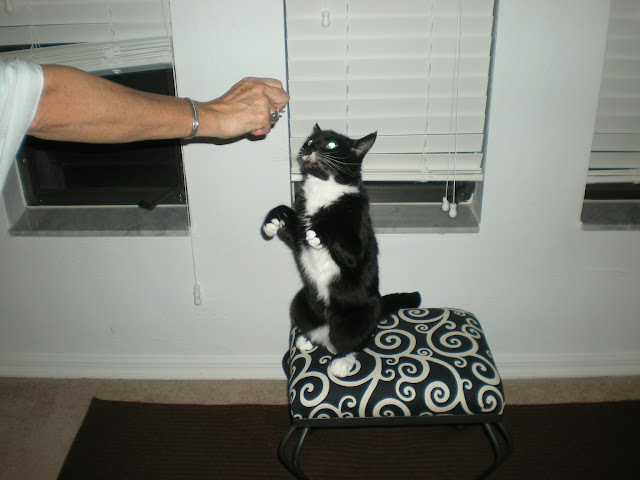 After work, I once brought home a barrel of fresh fried chicken and carelessly placed it on the kitchen counter.  After changing my clothes, I noticed the lid off the barrel of chicken, so I yelled to my wife in her office, “couldn’t wait to hit that chicken, you must be hungry.” She replied, “you brought home chicken?“

Upon further review, a chicken breast had been liberated from the barrel and dragged down to the floor on the other side of the counter, by a certain individual who could be found eagerly gorging on it, without remorse.

Even though these activities are frowned upon in this establishment, Rumbalina duplicated that feat with a box of chicken, and due to her poly dactyl nature, she managed to do so, without opening the box.  An affinity for fowl in any form earned her fifth nickname, The Chicken Hawk. 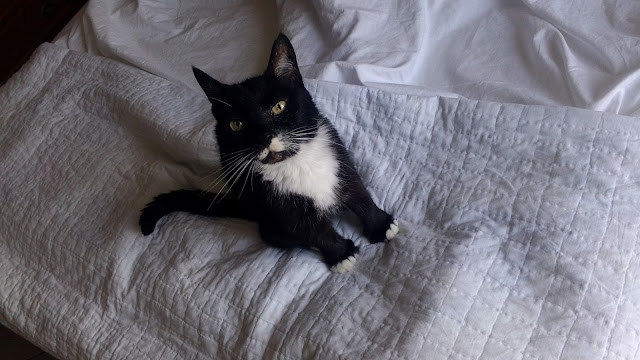 Every night without fail and regardless of my state of mind or physical position, that Chicken Hawk would sleep under my arm or on my torso, front, back or side, constantly shifting position as I did.  Earning her sixth nickname, the Fungus among us, The Cling-on or my trusty little Barnacle.

Finally, as the Barnacle grew older, grayed and slowed down a bit, she never lost her drive, spunk or resiliency.  She was the best traveling cat, loving the adventure of going in her backpack for walks, bike rides, sitting in the passenger seat for car rides, and even under the seat for international flights. People could not believe that this mobile cat could be so quiet, calm, affable and well behaved, almost like a person, little did they know.

Despite her years, there was a magical fountain of youth, meat in the grocery bag, salami or chicken on the counter would turn that 18 year old into a sassy 2 year old instantaneously.  Earning her the title of, Grizzle-pus or Grizza-bella. 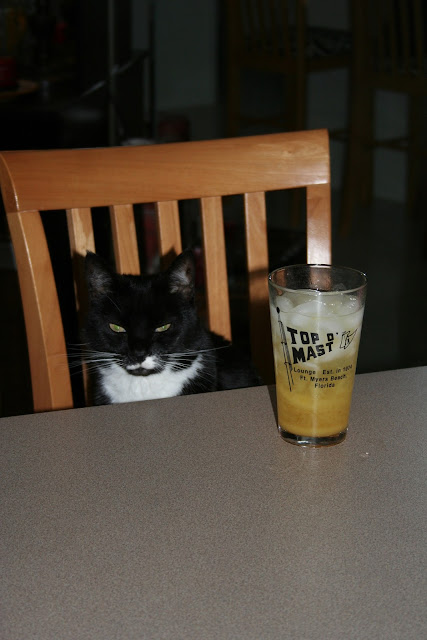 The place is here, the time is now, in this journey through the light and shadows, which is ours in living life, if one takes the time and pays attention, much can be learned through our friends, pets and familiars. I opened by saying that Mistletoe’s schooled me in more ways than one.  How so?

That darn cat taught me that happiness can be a lot simpler than we humans think.  Sometimes, all it takes is a soft brushing, a little love in a can, some milk, a warm soft lap. or even a spot on the passenger seat bathed in sunlight, to take in all that passing glory that we often take for granted on road trips.

Following in that feline’s huge poly dactyl footprints perhaps we should endeavor to… “Tiriamo in avanti” or “keep pulling ahead“, in doing so you will see and experience the good, the bad and the ugly. Mistletoes persistence and drive was her way of pulling through today, celebrating tomorrow and…

“Oggi chi siamo, domani non sapiamo” or “today we are here, tomorrow we do not know.”  Not wanting to assume anything about tomorrow, one must “Piu Che Puoi“… or squeezing “all you can” to celebrate rather than take those precious moments for granted.

In those respects, my “familiar” played a large role in schooling this Desperado  into coming down from his fence and letting someone love him, before it was too late.  At the end of the day, Mistletoes taught me rather than thinking that we are jaded and comfortably numb…

When I was a child I caught a fleeting glimpse
Out of the corner of my eye
I turned to look but it was gone
I cannot put my finger on it now
The child is grown
The dream is gone
I have become comfortably numb.

Perhaps we all need to slow down, enjoy the simpler things in life and stop to smell the roses.  In doing so, we can remember how, appreciate and never forget to feel like this. For a proper English translation of the lyrics to that fantastic song, click here.

Mistletoes had a long and fortunate life and all things must come to an end. It is sad when one wants to eat, but has no food or one has food but no will to eat. Worse yet, when one has the will and the food, but cannot manage to swallow enough of it.  In the end, although she still had the want to eat and live, tumor growth had substantially blocked her trachea and the passage of ample sustenance.

It has been 12 years since I last traveled this solemn path with a life friend of 20 years. Never the less, losing a life friend is no picnic. Despite my familiars heroic efforts, with a condition that offered no hope and could only grow worse, a choice had to be made to avoid suffering on her part.

On August 17, 2016, Sweetie’s good friend and former young upstart, little Mistletoes aka Dinky-B, went to join her after being put to sleep due to complications of feline oral SCC (squamous cell carcinoma) at the age of 18.


Submitted for your perusal, not your standard obituary or eulogy, even for a feline or perhaps familiar as it were. Was Mistletoe’s a familiar?  To be certain she was an assistant and divined information. Bottom line, they say feline’s have nine lives, but you can count on this, Mistletoe’s will forever be in my memory and to say that her presence will be missed dearly would be a gross understatement. 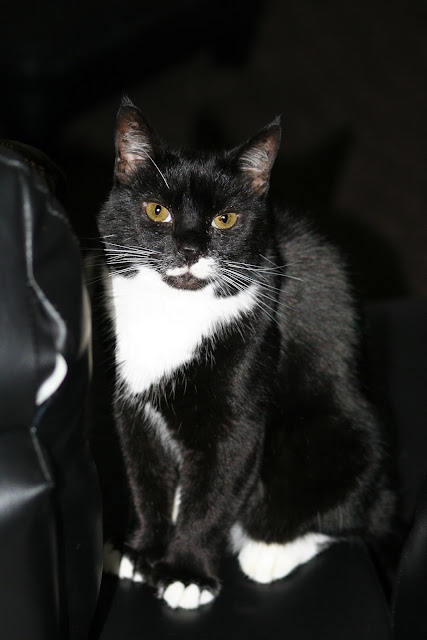