Takeaway Tuesday – Trump Takes $1.7Tn from the Poor to Give to the Rich The new budget is here!

As not at all promised by Trump when he was campaigning, Medicare will be slashed by $237Bn while $17Bn is being taken away from Food Stamps and yes, the Government will be getting in between you and your grocer as Trump is proposing no longer giving people food stamps, instead sending them boxes of food the Government selects for them (from campaign donors, of course).

Trump's budget is an outright assault on small businesses and farmers with a 25% cut to the SBA and a 15% cut to Agriculture with limited eligibility for crop insurance and caps on subsidies which will destroy those family farms, forcing them to sell out to big Corporations, who are still able to game the system to their advantage.

Rural Economic Development Loans and Grants are being entirely eliminated – yet another way of making sure no one can compete with Trump's Corporate Donors, who will also benefit from the 25% budget cut to the EPA. Overall, there's a 42.3% cut to all Non-Defense Discretionary spending. In other words, Trump is cutting about half the stuff the Government does to actually help Americans while giving ALL of that money to the Top 10% – and mostly the Top 1%, of course.

Despite coming off the most expensive disasters in history and with climate change getting worse, not better, 22% of the Army Corps of Engineers is being cut, which is a shame because, just this morning, new satellite data shows sea levels rising much faster than previously thought and the Army Corps of Engineers does things like building dams and levees to protect our cities from such things. But guess what happens when a city is flooded?  SALES!!!  Paint, hardware, carpets, furniture, Government clean-up contracts worth Billions of Dollars to Trump's donors. Isn't that better than spending Millions to prevent the disaster from happening in the first place?

And, just in case you thought Trump can't possibly be purposely trying to destroy the enviromnent to enrich his Donors – now they want to repeal Obama's restrictions on how much methane is released into the atmosphere by Corporate Donors who drill for oil and gas on Federal Land.  Methane, which is about 25 times more potent at trapping heat than carbon dioxide, accounts for 9 percent of all domestic greenhouse gas emissions.  The rule require companies to capture the gas in order to be allowed to drill but now they can just shoot it off into the atmosphere. Imagine what you would think if China were doing something like this? Trump's budget is now projected to add $7Tn to our $20Tn deficit during Trump's 2 planned terms and the White House is saying that's OK, because Congress just approved a higher debt ceiling.  That's with the $1.8Tn cut to Medicaid, Medicare and Food Stamps, which you would think would be hard to pass in an election year.

So, we're running up debt by $7Tn and taking money away from people who actually spend it in the economy and putting it into the hands of people who have so much money they don't know what to do with it so they drive up the cost of assets by investing in them while seeking to extract higher and higher rents from the poor people who can't afford things like cars or homes or educations – but need them to live.  What a great scam, right?

Of course such irresponsible nonsense (and, for real nonsense, the BBC is calling Trump's Infrastructure Package a "scam") is hurting the Dollar and we're down 0.5% this morning, back to 89.50 and that's helped reverse the earlier pullback in the Futures, which were down over 200 points on the Dow but none of that matters if we are failing our bounce lines (see yesterday's post) and, of course, rates are going up and, once again, we are forced to confront the math of deficits. The US is now $20Tn in debt and we currently spend $440Bn a year (10% of our budget) on the interest on the debt we borrowed at an average rate of 2.2%, which is about 1.25% higher than the Fed Funds Rate.  The Fed, whether they want to or they are forced to, is raising rates to 3.5% over the next two years so call that 4% interest on what will then be $23Tn in debt.  That would then cost us $1Tn a year JUST TO SERVICE THE DEBT.  That's not even accounted for in the budget yet it's $560Bn a year more than we spend now!

And what happens to us if interest rates rise to 6% over the next 6 years while the debt level hits $30Tn?  That would drive the interest payments on our National Debt to $1.8Tn a year – almost half our current budget and, of course, we would either have to enter levels of Greece-like austerity (and there's already nothing left to cut but the military) or, gasp, raise taxes to pay for it. As noted by Peter Martin, Trump's tax cuts will hurt in a more fundamental way. Cutting tax is a great way to boost the economy. If the unemployment rate was 10%, it would really help. It would lift the economy without stoking inflation. But when the jobs market is on fire and the unemployment rate is below 4%, it will add gasoline and make inflations' flames fly higher, which also puts more upwards presssure on rates (the rent the Top 1% charge the Bottom 99% to use their money).

So the Rich are going to get much, much richer while the bottom 99% will go deeper and deeper into debt to pay for it.  One of the only actually democratic things the GOP still believes in is that the National Debt should be equally distributed among all Americans, no matter how rich or poor they are so the $170,337 owed by you is the very same $170,337 owed by Donald Trump to finance all these tax cuts and pay-offs to Campaign Donors.

In fact, Wells Fargo just warned us that "Debt may be filling the gap for many households when incomes have not kept pace with rising living expenses.  A reversal may be ahead if income growth does not catch up to consumer expectations."  Lower income consumers have been showing signs of weakness, because their income has been growing slower than wealthier Americans’. The pockets of weakness may explain why some asset-backed securities are performing worse even as the unemployment rate dropped in January and consumer confidence and income growth expectations are strong. 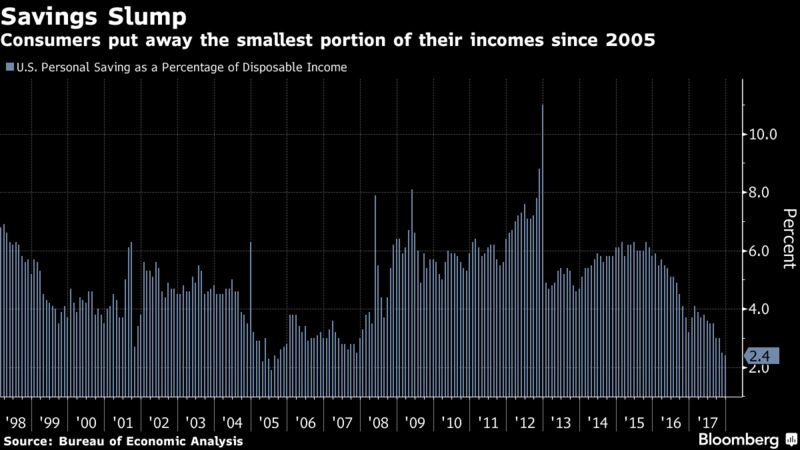 In other words, Americans believe all the BS the Administration has been spouting and they've stopped saving and started spending in anticipation of "unbelievable" tax cuts and trickle-down bonuses paid by their greatful Corporate Masters as they bring back the money they stashed overseas to avoid paying taxes for years (which would have boosted Obama's budgets) without any penalty whatsoever.

Do you really think this is going to end well? News:
Member
Here Are the Places That Struggle to Meet the Rules on Safe Drinking Water
By: BRAD PLUMER and NADJA POPOVICH
News:
Member
Resist a US trade deal. Your life may depend on it
By: George Monbiot News:
Member
Six months after the Olympics, Rio is worse off than ever
By: Lindsay Gibbs News:
Member
Dropping A Weight Down A Disused Coal Mine Is The New Way To Store Energy – And It Might Just Work
By: Mike Scott, Contributor News:
Member
Crime is down, so why do most Americans believe the opposite?
By: Liz Posner, Alternet
phil
Author

No massacre for the markets as we're up 150 points

Looks like CMG is up $30 pre-market!  Don't forget we had a plan for this!

We have CMG in the LTP and I still like the trade, though you could set it up a bit lower now.

There's the real difference between TA and Fundamentals – that was a fundamental-driven decision that ignored the very ugly chart and took advantage of the incorrect move to buy options at their cheapest (and sell them at their most expensive).  Now that we're recovering – I don't have to be greedy or guess the top, we just stick with our plan (but better prices than we thought) and we're left with a fantastic spread that should pay us another $50,000 which we can sell $50,000 worth of short calls against over the next two years.

Keep in mind we built that play PATIENTLY.

HBI/Batman – We don't have an HBI or LB position and I'm still more inclined to add LB though HBI did come down nicely (because it's in a worse channel).

HBI/Batman – Well I hope they disappoint, so we can get back in.  Been waiting for them and LB to report and see who's a better deal after.

Just to be clear, I like LB better than HBI – it's just that, by Thanksgiving, LB had already pooed and HBI didn't so I went with the one that was a better deal at the time but it was my intention that LB be the trade of the year and that's the one I'd prefer to replicate (still in the Money Talk portfolio).

/RB for another go? Not sure ahead of inventories.

Me either – not playing.