The Futures are up, of course.

The Futures are always up on Monday morning as it's a low-volume event and "THEY" can start the week off on a good note.  Since lat night, at 6pm, the Dow was up at 24,550, down to 24,350 and now back to 24,450, which is 50-points better than Friday's crappy close so YAY!, I guess.  It's all total BS, of course and I don't even work Mondays anymore (this isn't me, this is PhilBot 3000, my AI work in progress that will take all of your jobs, starting with mine) so it just doesn't matter but, for the sake of having a post – we'll pretend that it does…

Both the IMF and the World Bank had meetings this weekend in Washington, DC and the general consensus there was that the Global Economy is good but Debt and Trade Wars risk making it bad again.  Since Debt and Trade Wars are Donald Trump's go-to policy moves – we're probably screwed.  A communique by the IMF’s main advisory committee, released Saturday, represented a ratcheting-up of pessimism since the group’s last semiannual meeting in October.  “I don’t know where the trade dispute is going quite frankly,” Budget Secretary Diokno said in an interview. “President Trump keeps changing his mind.”

Central bankers sounded the alert that a trade war would leave them worrying more about the economic fallout than any boost tariffs would give to inflation. Colombia’s central bank president said a trade war would be "catastrophic," his Paraguayan peer said it would be "bad for everyone," while Japan’s chief described protectionism as "very undesirable."  Across the board, 2019 growth forecasts are moving lower while debt is getting quickly out of control.

In particular, according to Bloomberg, the IMF is worried that markets might be underestimating the threat of an inflation shock in the U.S., where the Trump administration is increasing fiscal stimulus with the economy at or near full employment. A surge in inflation might force the Federal Reserve to raise interest rates faster than expected, a move that might cause turbulence in emerging market. The fund warned that global public and private debt has reached a record $164 trillion. A spike in interest rates would test the ability of borrowers to refinance all that debt.

All these concerns, of course, are reflected in this year's 25% jump in 10-year note yields and we may pop over 3% this week for the first time since Jan, 2014.  The German 10-year is still 0.6% indicating that yes, people have lost that much faith in the US economy and our ability to pay back debt during Trump's first year in office.  And that is coming WITH the stronger Dollar, which hit 90.50 this morning and is keeping a lid on rates, as well as commodity inflation – for the moment. 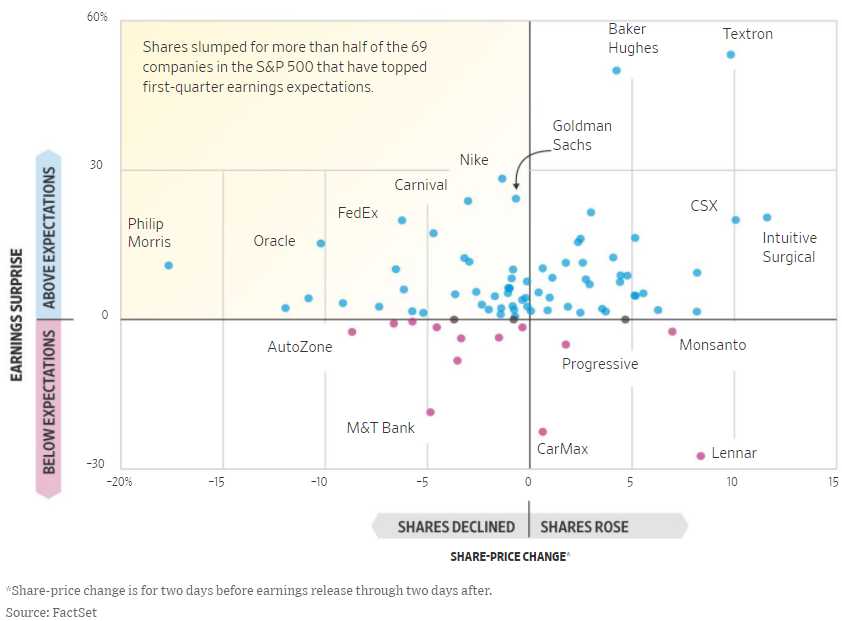 We're heading into the meat of earnings season and, so far, though most of the 69 S&P 500 companies that have reported have beaten expectations – it has not been enough to keep them from selling off after the fact.  That's because expectations were already very high and valuations are very, very stretched so nothing less than perfection is acceptable to most investors.

We don't want to draw any conclusions with 431 S&P companies left but this week 180 of them will check in, so we'll probably have some conclusions by the end of this week – so stay tuned!

That's right, it's a very busy earnings calendar this week with a lot of big tech names checking in on Thursday but GOOGL kicks things off this evening along with WHR (we're long) and ABX (we're long) but there are so many interesting reports heading our way this week, it will be all we can do to keep up: 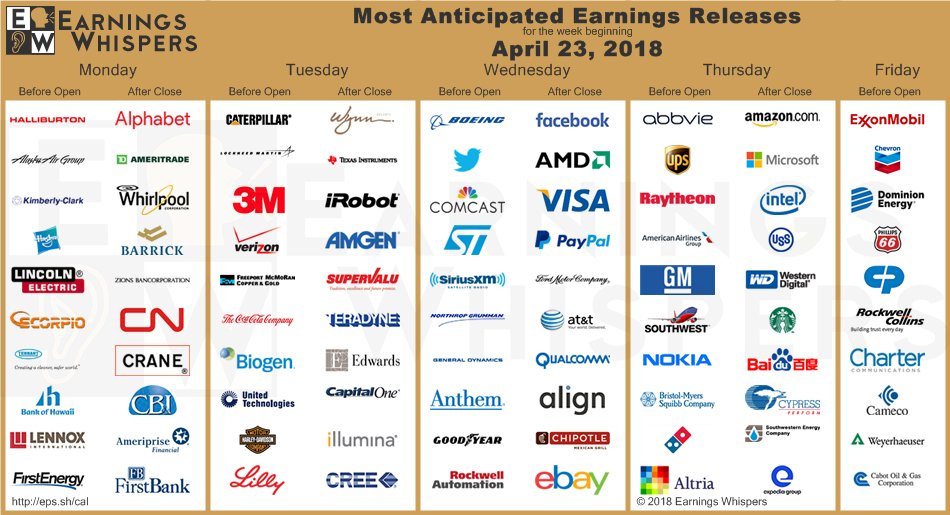 There NO Fed speak this week as the Fed goes quiet ahead of next week's rate decision.  There's also not too much data but we do get Q1 GDP on Friday and that's going to be a disaster at MAYBE 2%, dramatically lower than last quarter's 2.9% which would be 33% below Team Trump's projections and a complete budget-buster on many levels.  The only thing that might save us is, ironically, rising inventories, since that's counted as a plus to GDP – even though it actually means that Christmas products died on the shelves last quarter.

We'll also hear activity reports from the Chicago, Richmond and Kansas City Feds this week along with PMI and Consumer Cofidence and Sentiment but nothing earth-shaking, so the focus will be on earnings for sure: 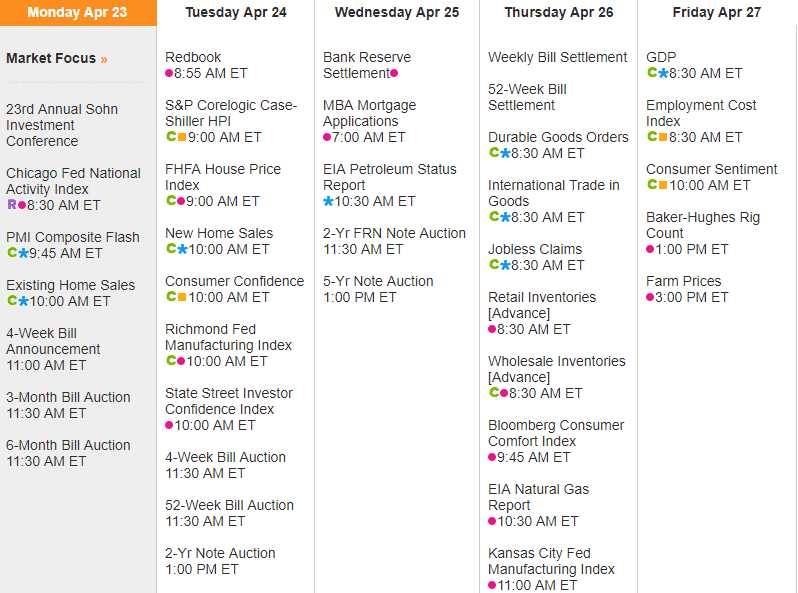 Back on Feb 22st, we drew the following chart to illustrate the levels to watch on the S&P 500, as predicted by our fabulous 5% Rule and here we are, two months later, still watching the same lines with the S&P at 2,676 this morning.  We'll see how things settle out 180 earnings reports from now but my premise remains that 2,640 will become the top of a channel that goes all the way back down to 2,400 over the summer.

Let's be careful out there!

News:
Member
A fifth Republican and a Fox News host have called on Pruitt to resign or be fired
By: Natasha Geiling 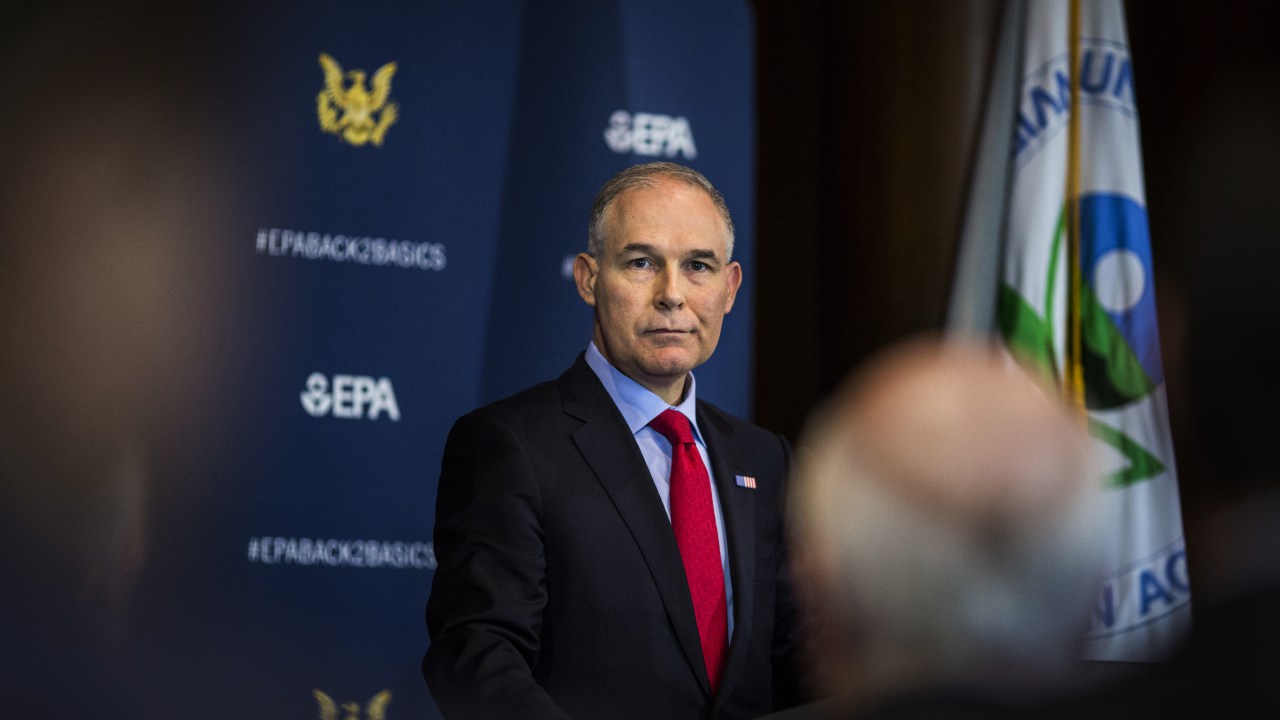 News:
Member
She Tried To Report On Climate Change. Sinclair Told Her To Be More “Balanced.”
By: Steven Perlberg 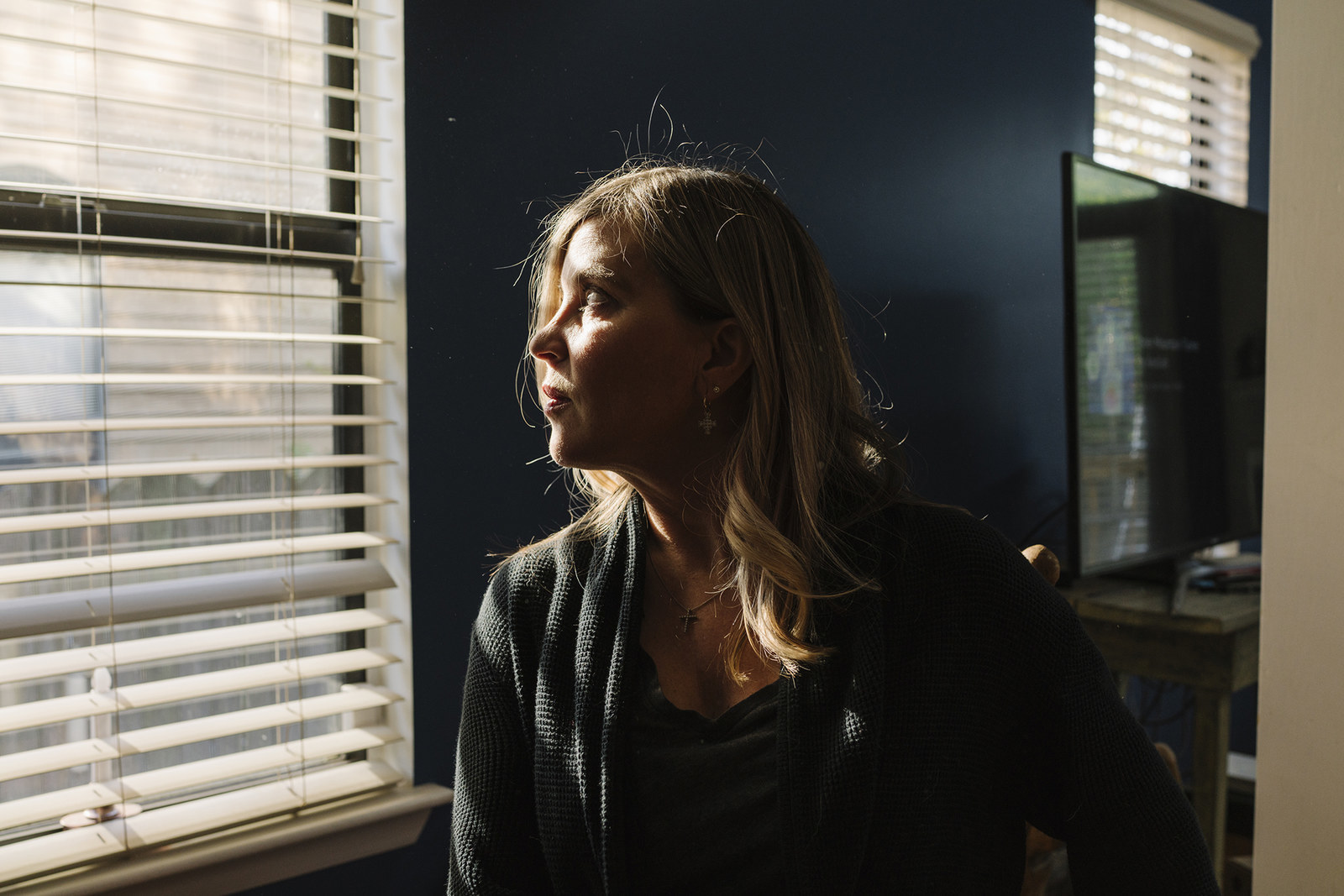 Jeffrey Gundlach- He advised investors to plow money into the SPDR S&P Oil & Gas Exploration and Production exchange-trade fund (XOP) , which trades at $38.9 per share. He said the energy sector would outperform the broad market S&P 500 going into a recession. (Are we really going into recession in 2018?)

Yodi:  This is one of Phil ´s trades I chose and is BUYING the stock. 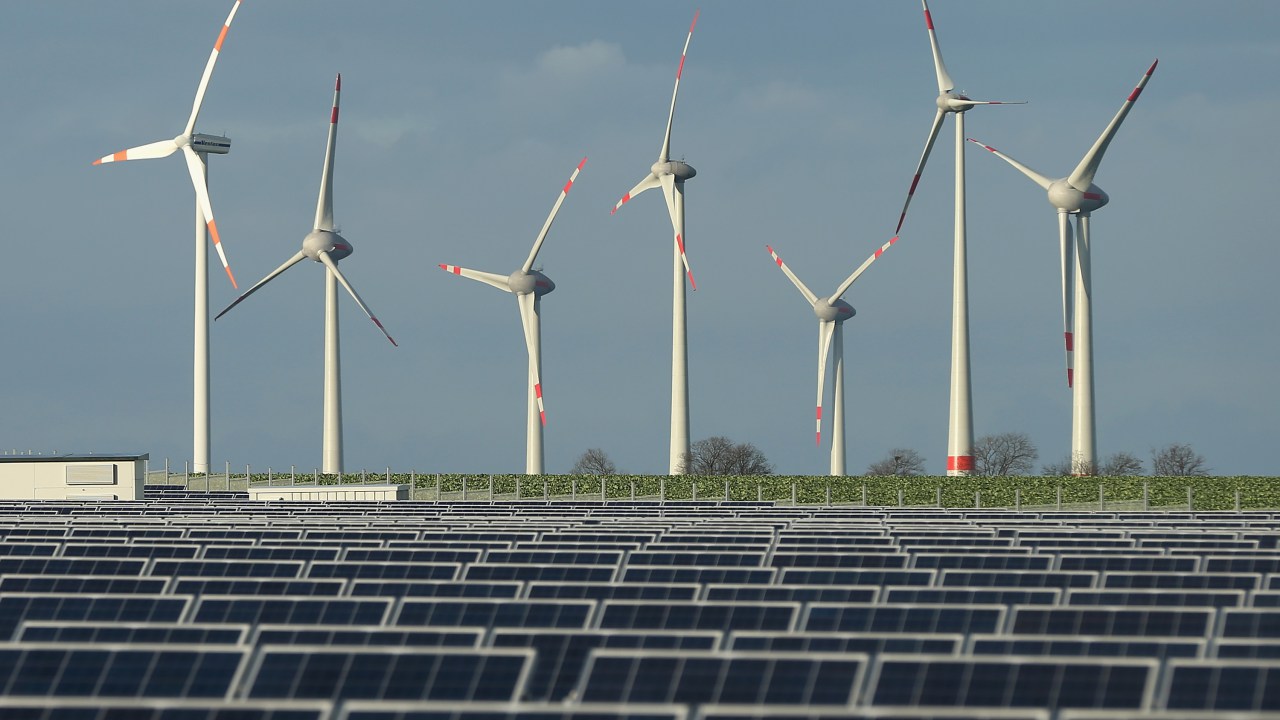 News:
Member
Inside the Decline of Sears, the Amazon of the 20th Century – WSJ
By: Suzanne Kapner 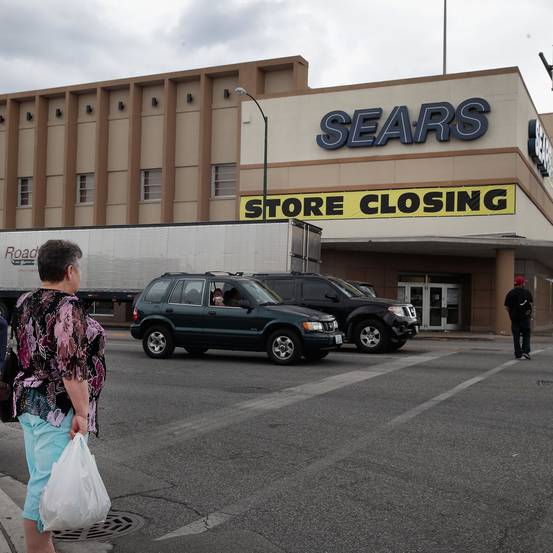 News:
Member
How Windmills as Wide as Jumbo Jets Are Making Clean Energy Mainstream
By: The New York Times 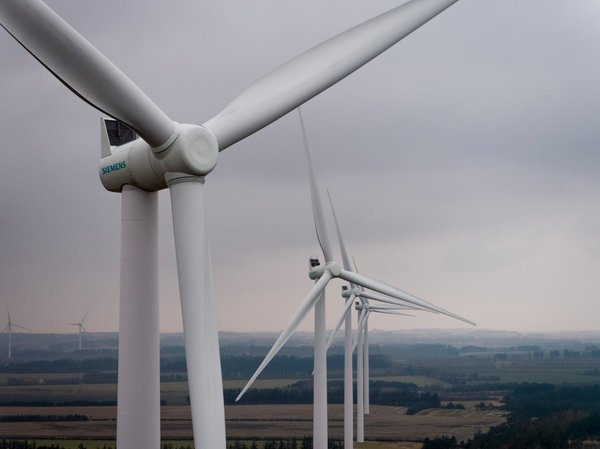 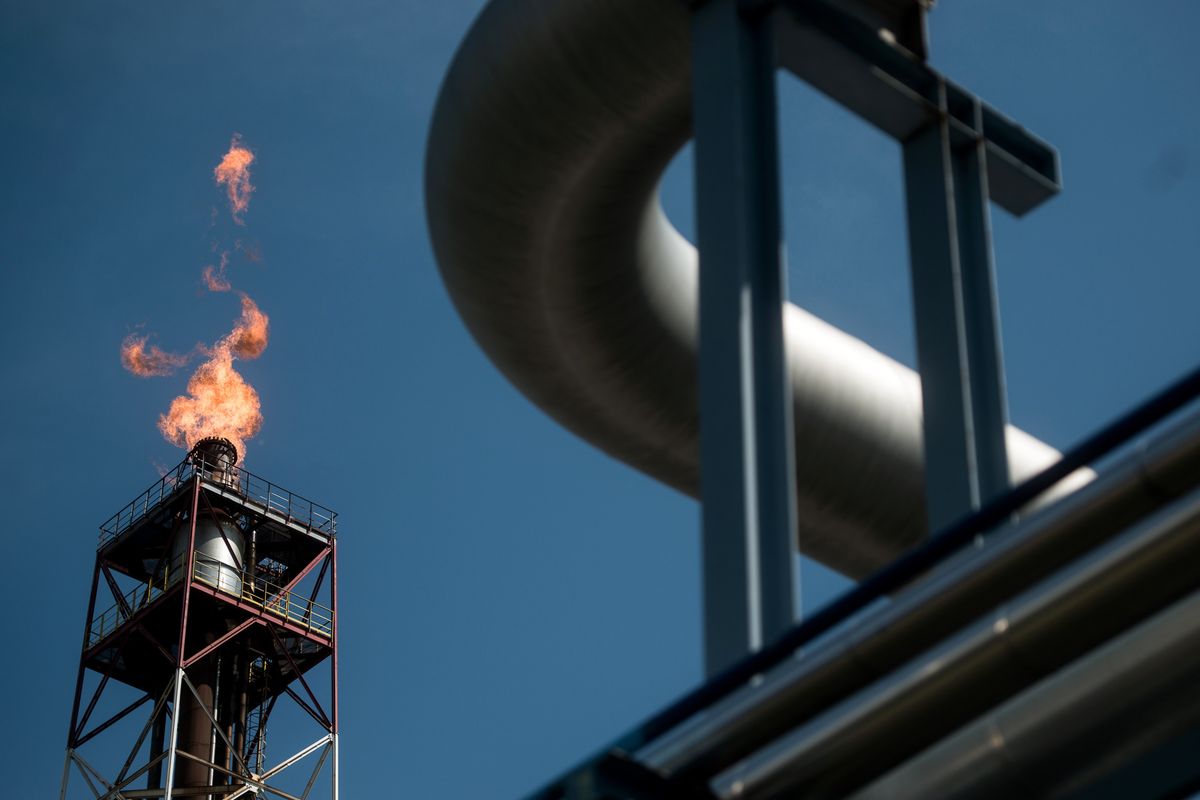 What is driving /RB up so much?  It's Monday and it's acting like it's Thursday after a big draw report………

/RB/Ravi – Gasoline contracts don't have pressure like oil because we actually do consume it and there's a lot of fudge factor at retail (gas stations with empty tanks, tanker trucks can be empty or full…) so there's no accurate way to get a count in a country that consumes 10Mb/d with 150,000 gas stations with 12-24,000 gallons (300-600 barrels) of storage in each (67Mb) plus the tanker trucks that supply them (10Mb) and the trains that supply them (10Mb) and, of course, 200M cars that hold half a barrel each so that's another 100M barrels that may or may not be in cars at any given time.  That's why it's idiotic that the price reacts to up and down 2Mb in inventory.

SKT/Yodi – Good catch, I fixed that.

Gundlach/Dave – Do the opposite of what he says if you want to get rich.

Indexes not looking too pretty.

Barrick Gold Cut to Hold From Buy by Canaccord Genuity

why are my comments awaiting moderation?

Jabo – Your comments were in moderation because there were no FU in them! 🙂

jabobeast – not sure what happened, I'll see if I can find out.

thx ilene! it did that friday too.

Oh yeah, I forgot I was ignoring Jabob.  Well, we got a lot accomplished and my mood is better and the conversation on the board has been elevated.

Nope, not changing my mind on that one….

Congrats to the GreenCoin players.  If we can get this stuff to be liquid – we'll be in great shape!

Water… it has always been a function of energy:
https://humanprogress.org/article.php?p=623

not a new problem at all.
https://m.youtube.com/watch?v=amDo-KqUjpA

There's no particular news driving this move so it's very tempting to short but no particular reason to do that so: Watch and Wait!