And down we go again!

Don't worry, it's not only Monday but it's a pre-holiday week so the volume is likely to be low and it's hard to break out of a range on low volume – even to the downside.  That means we kind of like playing 7,400 on the Nasdaq (/NQ) Futures for a bounce – with tight stops below tha line.  The S&P (/ES) Futures are also playable if they get back over 2,850 (now 2,845) with very tight stops below that line as /ES is $50 per point, per contract – so we don't want to mess around. 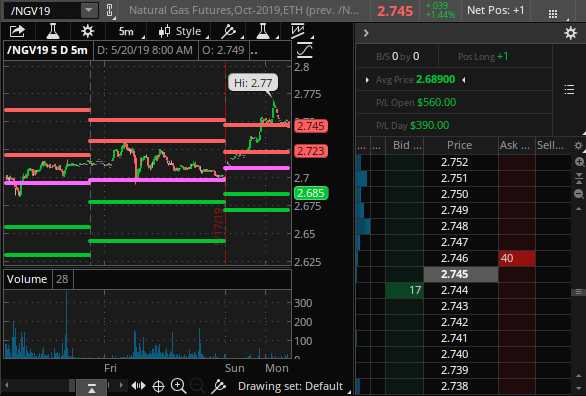 We did get a nice pop this morning on Natural Gas, which was our long idea from Wednesday's Live Trading Webinar and we're already up over $500 so that's now our stop line but hopefully $2.75(ish) will hold and we'll leg up further but congrats to all who played along with that one on the quick winner.

We also, of course, blew through our hoped-for 25-point drop on the Nasdaq (/NQ) as we're now down over 100 points from our Webinar short and that one is good for $20 per point, per contract so $2,000+ on that short and that's why we love the Futures – it's a great, quick way to hedge your portfolio that quickly returns the cash you need to adjust your bullish positions – like we did last week in our Portfolio Reviews.

Speaking of the Portfolio Reviews, I want everyone to keep in mind that I have been saying for the past month that we are only staying in our portfolio positions to demonstrate how to trade through a downturn in the market and we ABSOLUTELY would have cashed out any portfolio that mattered to our long-term financial future.

We are very likely heading into a down market and we may correct back to the December lows and that will be ugly and painful and it will take much longer to recover next time.  This is a teaching site so we're going to teach how to handle a down market but I would much prefer to be 100% in CASH!!! – which is where my kids' college funds have been since September and there has been nothing since then that's made me think it was worth risking their education on! 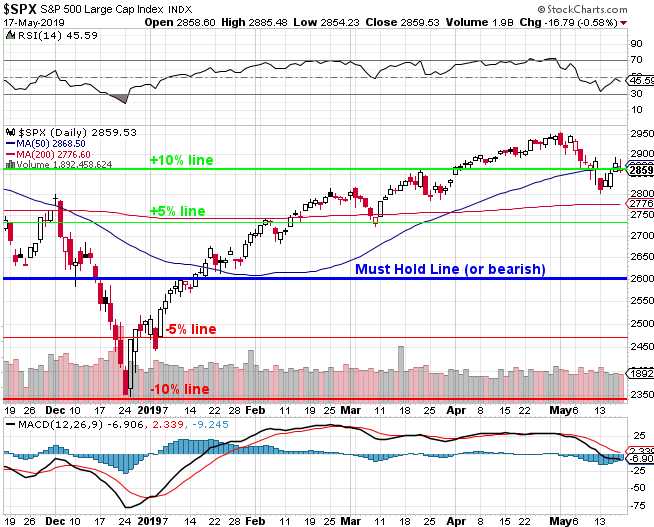 There's nothing wrong with being in CASH!!!  You can take the summer off and go on vacation or catch up with family and friends – the market will still be here when you get back…  That's why people "Sell in May and Go Away" – they have other things to do in the summer than stare at screens all day.  This is my job – what's your excuse?

If anything, the Trade War with China is intensifying.  I can't believe the market isn't down much more with China telling Trump to shove his negotiations last week and now Trump is attacking Huawei in what China says is an attack based on unsupported claims of spyware and simply an attack on a successful Chinese company that threatens the US's dominance in tech. 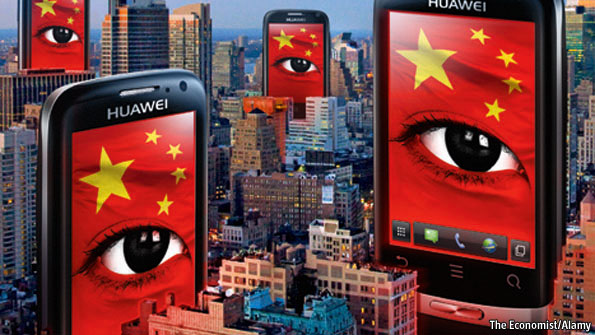 The basis of Trump's claims against Huawei is that the company does work for the Chinese military but so does INTC and GOOG and MSFT, etc.  That's what big companies do with major buyers of technology – that in itself is not a crime and Huawei is being treated as if it were tried and convicted of spying based on what China says is rumor and innuendo.  Since there were claims of "spy chips" yet none of these chips have ever been actually seen by anyone (and think how many thousands of customers around the World would have to be lying) and since our President is hitting the 11,000 lie mark this month – it's kind of hard to take Trump's side on this one.

Just consider that it's POSSIBLE that the Trump Administration is making something up to futher their ends and that Huawei is an innocent corporation that employs hundreds of thousands of people that is being targeted by Trump and his allies.  What should China do about that?  What would we do about that?  This goes far beyond a trade war, now we're having a tech war and soon we'll be having a Cold War and I guess, to some, that was when America was great but I lived through the first one and I'm not looking forward to another – and neither should investors.

While it's likely to be a quiet week in the markets, the rest of the World isn't taking a vacation and we have FOURTEEN (14!) Fed speeches this week including Powell, who speaks this evening in Atlanta and he'll be speaking about the next decade, which starts in 7 months.  Wednesday we get the Minutes from the last Fed meeting and, during the week we get the Chicago and Kansas City Fed Reports with PMI Thursday and Durable Goods on Friday and Monday, of course, is a market holiday – so next week will also be low-volume BS but we still get the Non-Farm Payroll Report next Friday. 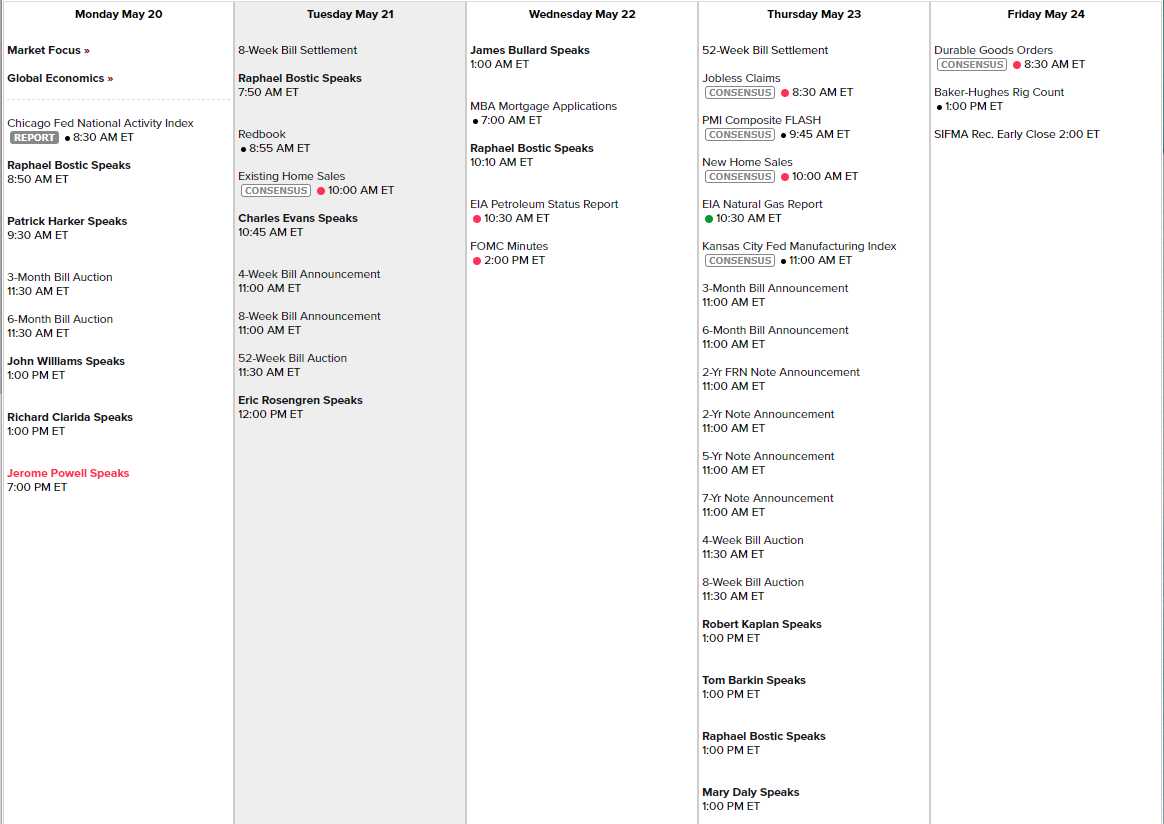 And earnings season is still a thing, the S&P is pretty much done but there are thousands of other public stocks and some of them take a while to report – so these are the stragglers that are coming in – still some big names. 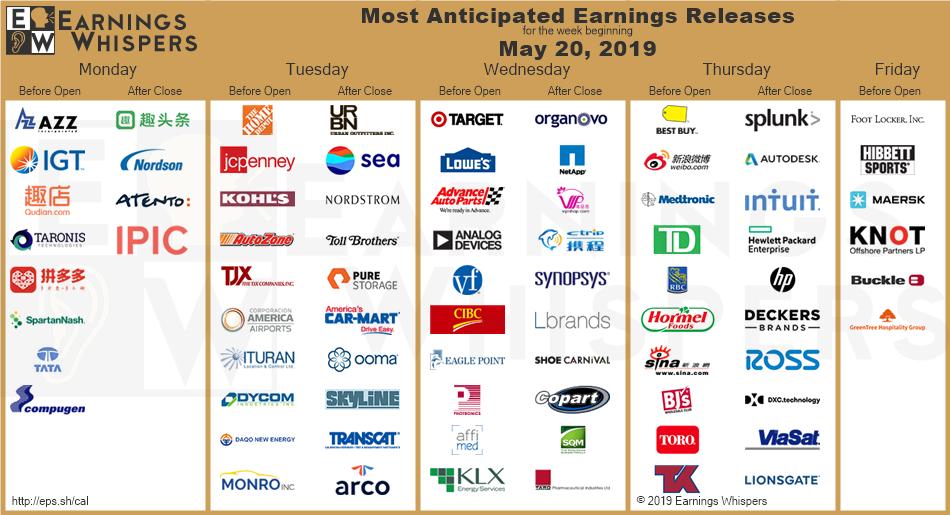 Tesla (TSLA) is taking a dive this morning and might test the $200 line as more and more analysts are starting to agree with my premise that Emperor Musk has no clothes.  Better late than never I suppose… A month ago, on April 4th, I wrote: "Tuesday Turmoil – Tesla Valuation Reaches Peak Insanity" in which I noted how ridiculous it was to value Tesla (NASDAQ:TSLA), who struggle to make and sell 25,000 cars in a quarter, at the same price as GM (NYSE:GM) or Ford (NYSE:F), who each make 25,000 cars PER DAY, (that's 90 times more). The companies are not even playing in the same ballpark (though they are playing the same game, so investors get confused) – it's like betting your son's undefeated little league team can take on the Yankees – there are other factors involved than just their record against other children.

Well, Tesla is playing in the big leagues now – and getting their asses kicked!

3M/kgabor, take a look at the quarterly revenue numbers from the income statement, revenue trending down with 1st quarter 2019 down about 5% over 1st quarter 2018 and lower than previous quarter as well

That efficiency chart is interesting.  Seems to be totally consumer centric though.  In terms of total environmental impact I wonder how the cost of mining and processing materials for batteries and fuel cells would factor in.

Phil and Yodi.  Thanks for the comments.  This was part of a larger position in SIG.  The whole position still has a lot of positive delta.

tangled – they did a study in Germany that came up with a different conclusion than the happy greenwashed graphics above. When you figure total production and operation, BEVs lose to ICE and they lose badly to hybrids. It's like putting ethanol in gasoline – reduces tailpipe emissions but considering ethanol is net zero energy production, you're replacing passenger car tailpipe emissions with agricultural emissions. Plus you wouldn't want to consider the pollution caused by the pesticides and herbicides, or the topsoil erosion and run off into streams, lakes and rivers, because then you might decide that ethanol is actually really bad for the environment – just like BEVs, especially when China is the biggest BEV user and they are building coal-fired power plants. Does anyone think the Chinese care about the environment? LOL. They're switching to BEVs because they can power them indirectly with coal which they have lots of, instead of petroleum which they have none of.

MMM/Kgab – No growth meaning for paying 18x earnings and profit was $5Bn in 2014 and $5.5Bn estimated this year so, after 5 years, you are being generous and let's not forget taxes are far less now so what happened to that $1Bn? 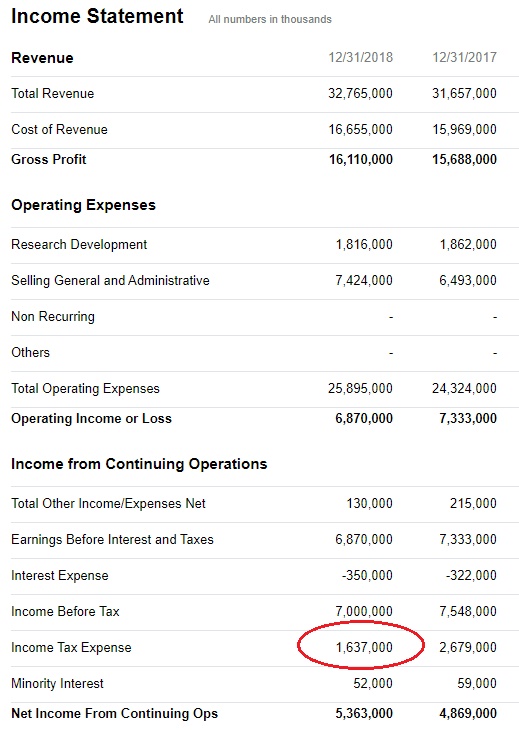 And what Mike said – not a good trend.

Consumer/Tangled – Well, to some extent, I think we can better control things at the manufacturing level (we don't, but we COULD) but there's no point until we can get the consumers reliably using renewables – then we go after the rest of the chain.

I'm starting to get a bit nervous on Apple.  The trade war could really bite them. They get 15% of their revenues from China, and a boycott is gaining steam there now.  Now with this aggressive action against Huawei, it is starting to feel like China is going to be forced to retaliate against Apple.  I followed you and took big profits off the table above $200, and shifted to the 180/220 spread, and have been short a good amount of calls that have been hedging things really well, but I'm a little worried about another trip down to $140/150.  What does your crystal ball say?

Phil your comment on SIG is genius.  I started with a 1/8 position and added more because I like what I saw with SIG so the position sort of grew.   I like how you add the July $22 calls to the mix because you can always roll the short calls to the same strike further out in time.    Is there any reason you wouldn't do all the short calls July and plan to roll?

Can you talk a little about the specific benefits of a wider spread.  I am fast becoming a believer of the long term spread vs. short period spreads.    I also like how sometimes if you have a BCS and the spread goes way into the money you will cash out the longs leaving the shorts and buy new BCS "protecting" the shorts with the proceeds usually taking a large sum off the table.