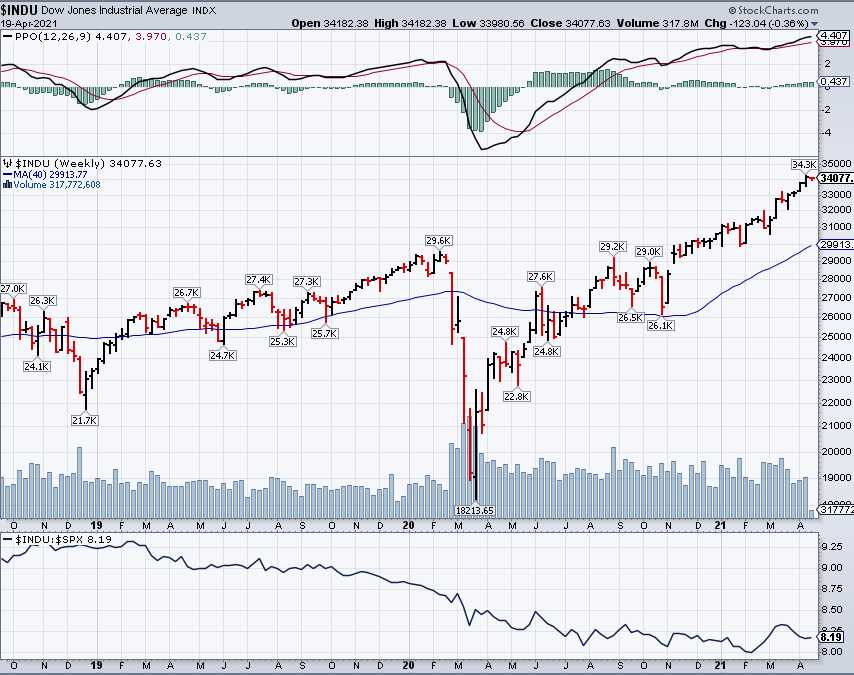 What a run we've had!

We also gave a weekly bonus of $600 to what became close to 20M unemployed people – that added $12Bn/week to the economy and then in December, that was extended and another $1,200 went out to every taxpayer under the Consolidated Appropriations Act and, more recently, in March, it was the American Rescue Plan with $1,400 checks for everyone.

Then there was another couple of Trillion in Fed Asset Purchases and a couple of Trillion worth of Government Aid to business…. All in all, $6Tn of our $20Tn GDP (30%) has been stimulus so that's about 30% more earnings for companies than has been realistic during the pandemic.  Of course, now things are getting back to "normal", hopefully – but what is normal now?  It's pretty much impossible to believe that 2021 will be 12.5% better than 2019 was for the S&P 500 or the Wishire 5000 but that's where we're priced – to perfection and beyond. 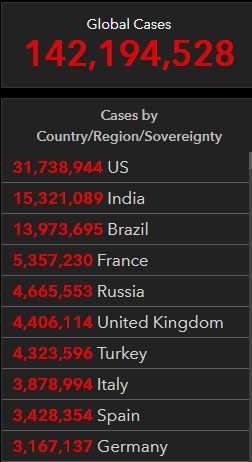 We'll see how Q1 Earnings look but we have a Global Chip Shortage that's certainly being felt in many industries and the virus is still ravaging parts of the World, especially South America and India, where they had 259,167 new cases yesterday alone.  Still not as bad as the US peak of 300,669 that we hit on Jan 8th, towards the end of the Trump error.  Yesterday, the US had "only" 70,355 new cases and "only" 483 people died vs 3,895 people who gave their lives for Trump on January 8th – so things can get better rather quickly but Modi is still in office in India and, so far, doesn't seem like he's going to make the changes needed to curb the virus there.

As you can see, even at India's pace, it's going to be very hard for any country to catch the US, where 10% of our population has had Covid with 2% of those people (so far) dying of the disease.  Hopefully, we've put the worst of it behind us but what if we haven't?  Are you going to travel to India this summer?  How about Brazil, France, Russia, or Europe or South America?  Are you sure your vaccine shot will work against their strains and how long will that shot keep you immune?

How are things back to "normal" if we can't even anwwer those questions?  Are we going to take cruises?  Are we going to sit in crowded movie theaters where someone is coughing after we've eaten in a crowded restaurant?  Stadiums for concerts, sports, comedy clubs, casinos – buses…   The list goes on and on for things that are not likely to be normal for the summer of 2021 so how, exactly, are we 12.5% better off than we were in 2019?

Back to normal may be possible going forward but 12.5% better than normal is simply not realistic at the moment, so I'd knock that off the market right away and that brings us back to the 200-day moving average at Dow 30,000 – a 10% drop from where we are now.

You should be looking at all your portfolio stocks like this and determining whether, in more rational times, people would have paid this much money for them given their current ability to return capital because, in the end, that's what it all comes back to – eventually.  Still, as Keynes used to say "The market can remain irrational longer than you or I can remain solvent" and that was from bitter experience as Keynes went broke betting the market would eventually do the rational thing.

On Thursday we added more hedges to protect our long positions and there is NO WAY I would be playing long positions at the moment if we didn't have them very well-hedged.

Be careful out there!