How do we have so many strong openings and end up getting nowhere?

The market has been churning at these highs for quite some time but we're not making any progress.  This is with "great" earnings and "great" GDP an accommodating Fed and endless stimulus – you'd better be ready to grab a chair when this music stops – it's going to get ugly!

Not much for us to do but keep going through the motions.  Until the music does end, the game continues and we've been buying a lot of stocks for our Member Portfolios recently – despite my overall misgivings about the market.

Warren Buffett pointed out something interesting this weeken in Berkshire Hathatway's (BRK.A) annual report – he pointed out that NOT ONE of the 20 largerst companies in the S&P 500 in 1989 are on that list 30 years later – not one of them.  The biggest company in the World 30 years ago was the Industrial Bank of Japan and 6 of the top 10 companies in the World (13 of the top 20) were Japanese companies and all the "smart" money was that Japan was the place top put money in 1989.  I even interviewed for a job with Mitsubishi myself! 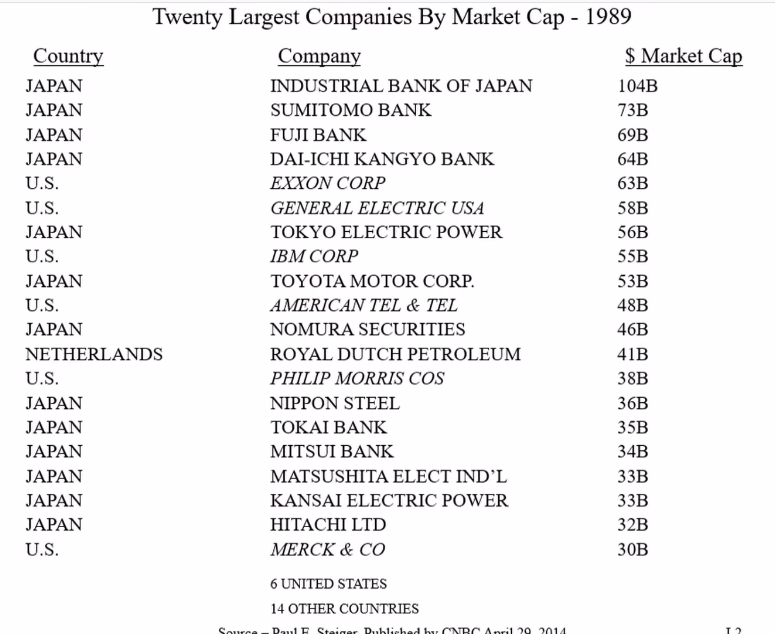 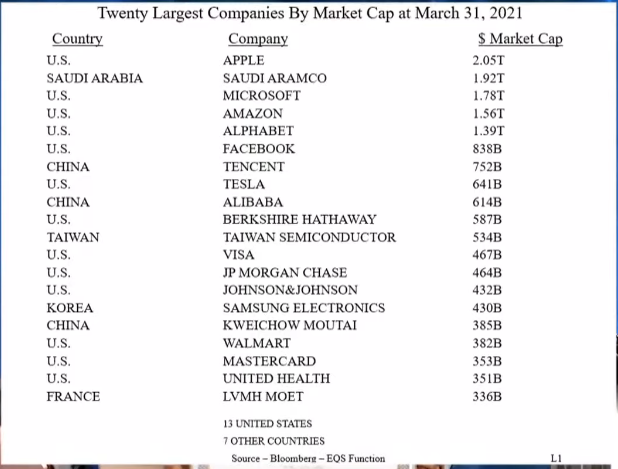 And talk about inflation!  The top five companies on our list today are EACH worth more than the entire top 20 were COMBINED in 1989.  Of course we use the term "worth" loosely but these valuations have cleary run amock.  In 1989, the Global GDP was $40Tn and now it's $80Tn yet the top 20 companies have gone up in price from $1Tn to about $16Tn – the cost of owning the companies that produce the Global GDP is now 16x higher than it was 30 years ago – THAT'S INFLATION!

Well, it's something, anyway.  Just like the cable company and the phone company get more and more efficient at extracting money from your wallet every year – the entire stock market does that through the Investment Banks – making sure there are more fees for them and less stock for your money for you.  We accept these ridiculous prices because the consumers of stocks have no advocate.  The SEC looks out for dishonest trading but they don't make a peep when a stock is trading at 500 times earnings, do they?

The P/E Ratio of the S&P 500 in 1989 was 11.82, as of April 30th of this year, it's at 42.57 – you are getting about 1/4 of the earnings power for your money these days.  As you can see from the Case-Shiller P/E Ratio, which takes inflation into account, we were already at 37.56 in December and the PRICE of stocks went up 10% this year – but the earnings remained the same.  What if the price of homes or cars or food were climbing like that?  You would know that, at some point, we'd hit a tipping point because it simply can't go on forever.  At a certain point, people have to make choices about what to do with their money.

Why then, do we labor under the delusion that the markets are exempt from those decisions?  The Fed and other Central Banksters have been printing money like it's going out of style (and maybe it is) for the last few years – even before Covid and the ultra-rich are converting their potentially worthless fiat currency into Stocks, Commodities and Cryptocurrencies – anything but fiat currencies.  Those then become an extraction tax on the bottom 99%, who have to buy Commodities to live and that money then trickles up to the Top 1% – who wisely invested in the commodities to protect themselves from the inflation they caused.  Isn't Economics just great?!? 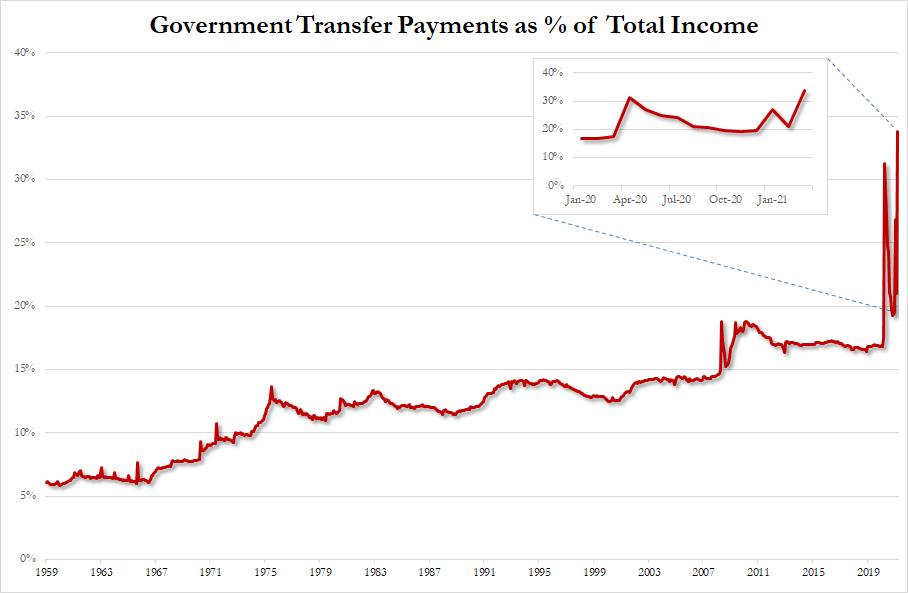 "We’re seeing very substantial inflation," Buffett said in his nearly 6 hour long address to investors. But it's what he said that was especially ominous:  “It’s very interesting. We’re raising prices. People are raising prices to us and it’s being accepted.”  Why does this matter? Because the ability to pass on price increases and have them stick, means the surge in prices will not be transitory, no matter how many times the Biden admin, the Fed or the Treasury lie and vow the opposite.

As you can see from the chart, the Government is currently shouldering the burden of inflation with Transfer Payments now making up 35% (more than 1/3!) of all income in the US.  Buffett was questioned about inflation during Berkshire's annual meeting:

Question:  "From raw material purchases by Berkshire subsidiaries, are you seeing signs of inflation beginning to increase?"

WARREN BUFFETT: Let me answer that, then Greg can get more into that. We're seeing very substantial inflation – it's very interesting. I mean, we're raising prices. People are raising prices to us. And it's being accepted. Take home-building. I mean, you know, the cost of– we've got nine home builders in addition to our manufactured housing operation, which is the largest in the country.

So we really do a lot of housing. The costs are just up, up, up. Steel costs, you know, just every day, they're going up. And there hasn't yet been because the wage– the wage stuff follows. I mean, the– the UAW writes a three-year contract, we got a three-year contract.

But if you're buying steel at General Motors or someplace, you're paying more every day. So it's an economy, really– it's red hot. I mean, and we weren't expecting it. I mean, all our companies, when they thought when they were allowed to go back to work at, well, various operations, we closed the furniture stores, I mentioned.

You know, they were closed for six weeks or so on average. And they didn't know what was going to happen when they opened. And they can't stop people from buying things. And we can't deliver them. They say, well, that's OK because nobody else can deliver them either, and we'll wait for three months or something of the sort.

And it just won't stop. People have money in their pocket, and they pay the higher prices. And when corporate prices go up in a month or two– and that was the price increase for April 1– our costs are going up, supply chain's all screwed up for all kinds of people. But it's a buy– it's almost a buying frenzy, except certain areas, you can't buy at.

You know, you really can't buy international air travel. And so the money is being diverted from a little– some piece of the economy into the rest. And everybody's got more cash in their pocket than– except for, meanwhile, it's a terrible situation for a percentage of the people. 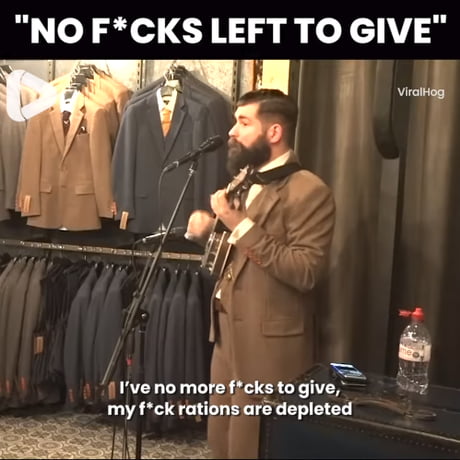 The small business person, if you didn't have takeout and delivery services for restaurants, you got killed. On the other hand, if you've got takeout facilities, then, same-store sales at Dairy Queen are up a whole lot, and they adapted. But it is not a price-sensitive economy right now in the least. And I don't know exactly how– what shows up in different price indices. But there's more inflation going on than– quite a bit more inflation going on than people would have anticipated just six months ago or thereabouts.

Like the U.S., China has tens of millions of small and medium-size private businesses, including restaurants and shops, which form the backbone of everyday economic activity. They account for as much as 80% of urban jobs and at least half of China’s tax revenue.  While businesses have benefited from China’s strong rebound this year, many are still trying to overcome weak consumer demand, rising operating costs and tight credit from banks that don’t want to sink more money into wounded companies.

Close to 19% of China’s small businesses shut down last year, compared with 6.7% in 2019.   While the insolvency rate is expected to be better this year, many companies still face serious cash-flow constraints.  A survey of more than 10,000 small businesses released in March by Peking University and Ant Group Co. found that 15% have sufficient cash flow to sustain operations for six months or longer, down from 19% in the third quarter of 2020.

Some economists argue that China’s rebound might have peaked, with an unbalanced recovery continuing to create challenges. Although retail sales soared in March, consumer spending overall has been weaker than some economists expected. The latest survey of factory-owner sentiment suggests that economic activity might wane through the rest of the year, with Western consumers expected to shift more spending to services, such as restaurants, instead of imported goods.

We still have a lot of major global issues in the economy but it's hard to get a real picture of what's happening with all this stimulus money being tossed about.  The general sentiment of Governments and Bankers is that they wouldn't dare cut it off so far – they are way too scared of what they'll be seeing when the music does finally stop…

9 Fed speakers this week and lots of Economic Data and lots of earnings to look forward to.  And the band plays on: 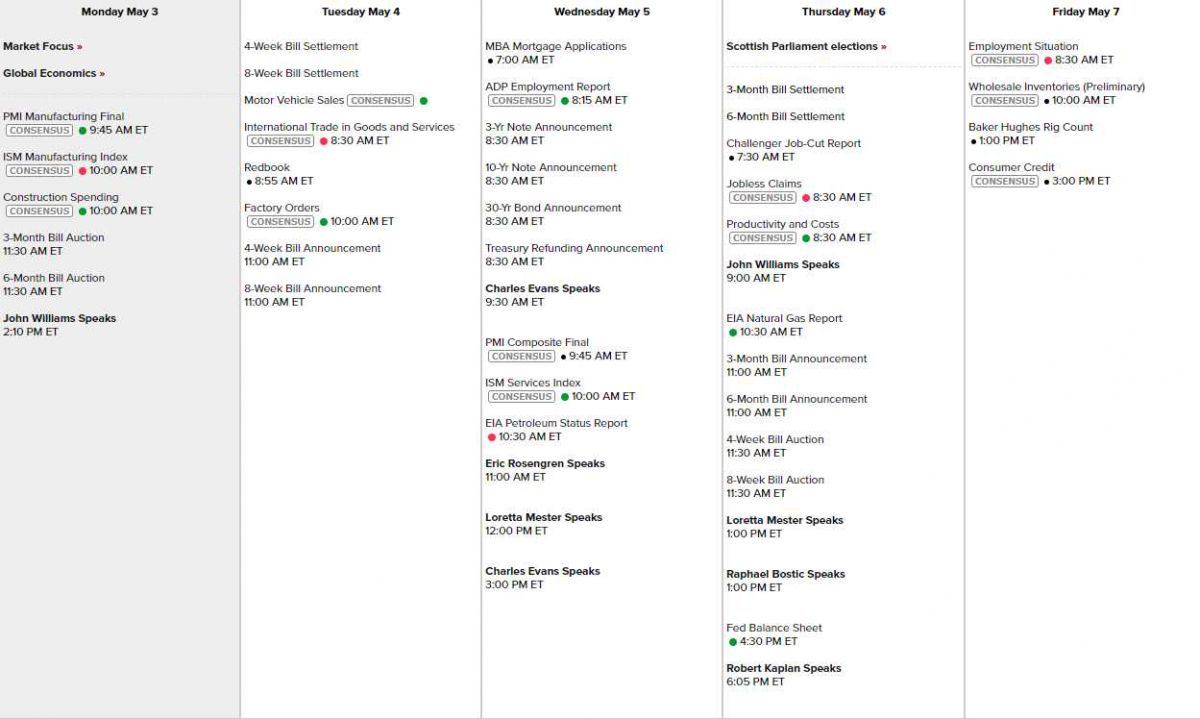 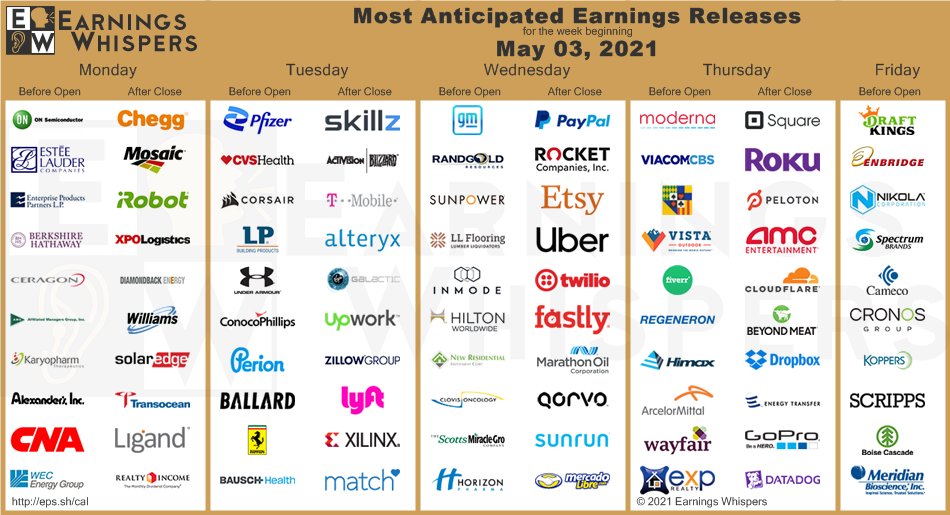 Any thoughts about the results from PETS?  Divided increase but stock is down even more today?

Pets they show zero yield on TOS likes like they cut their div.

Gold having a great day. Will add to GDX calls if gold can break over $1800 in the coming days….

The Board of Directors declared an increased quarterly dividend from $0.28 to $0.30 per share on its common stock. The dividend will be payable on May 21, 2021, to shareholders of record at the close of business on May 14, 2021. The Company intends to continue to pay regular quarterly dividends;

There's certainly nothing wrong with the earnings, up 4% from last year: 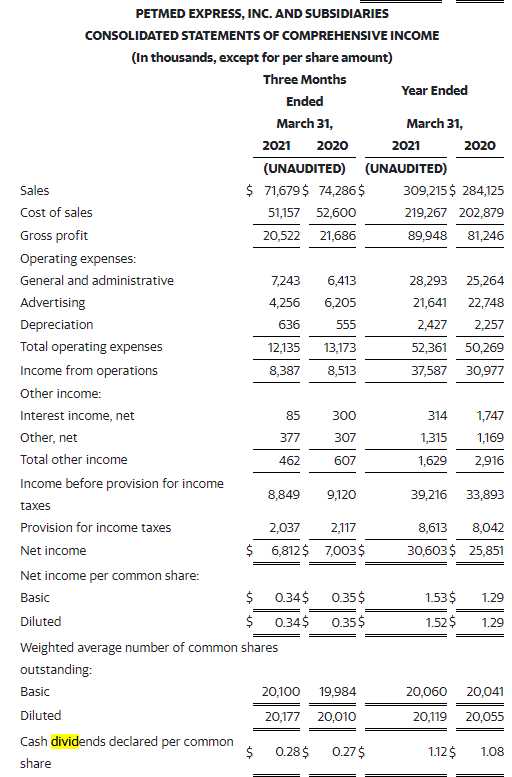 Thanks.  Luckily it's a slow day. 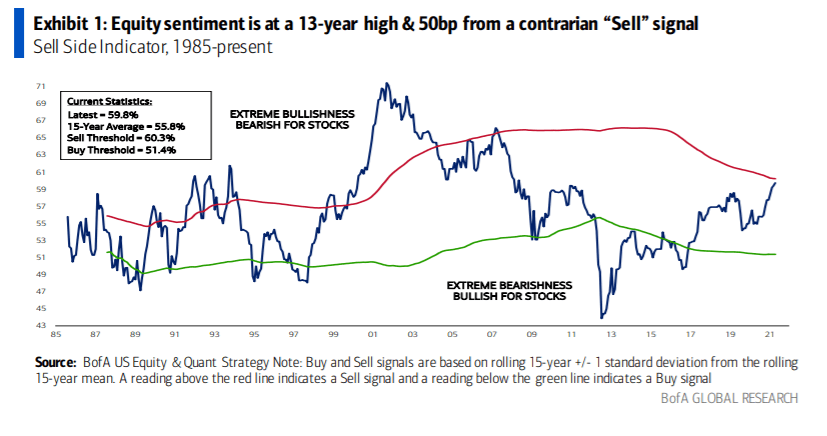 Besides the seemingly positive news on NFL coverage, any thoughts on the cause for Amzn tanking? Dragged down by Nasdaq?

AMZN/8800 – Still trading at 50x earnings and what happens when things go back to normal?  AMZN has benefitted from the virus but normal will likely be downshifting for sales and profits at AMZN.  Also, this is right where they topped out in the summer: