Wall Street Is Not Only Rigging Markets, It’s Also Rigging the Outcome of its Private Trials 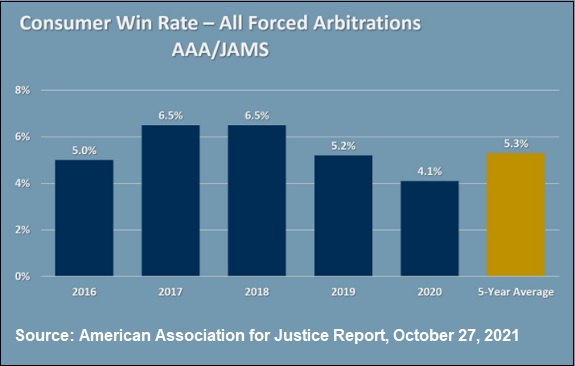 By Pam Martens and Russ Martens

When it comes to sycophants, Wall Street has no shortage of them willing to shill for its egregious private justice system called mandatory arbitration – a system which systematically guts the guarantee of a jury trial under the Seventh Amendment of the Bill of Rights. Think about that carefully, the industry that is serially charged with rigging markets and other felonious acts, is allowed by Congress to run its own privatized justice system. This is something one would expect to find in a banana republic, not in a country that lectures the rest of the world on democratic principles.

Wall Street’s private justice system effectively locks the nation’s courthouse doors to both its workers and customers, sending the claims before conflicted arbitrators who do not have to follow legal precedent, case law or write legally-reasoned decisions.

One of Wall Street’s serial toadies, the U.S. Chamber of Commerce, was quick to release a statement on March 8 when it learned that the House of Representatives was likely to vote on and pass H.R. 963, the “Forced Arbitration Injustice Repeal (FAIR) Act.” (Last week the House Judiciary Committee voted favorably to move the bill out of Committee and on to the full House for a vote. The bill currently has 201 co-sponsors.)

Neil Bradley, Executive Vice President of the Chamber, had this to say in March:

“The U.S. Chamber of Commerce strongly opposes H.R. 963 / S. 505, the ‘Forced Arbitration Injustice Repeal (FAIR) Act’… Members who do not cosponsor this legislation will receive credit for the Leadership component of their ‘How They Voted’ rating.’ ”

If that sounds to you like a threat to members of Congress that they will lose corporate campaign funding if they vote for passage of the bill, you’re thinking along the right lines.

Bradley added this preposterously bogus statement: “Arbitration is a fair, effective, and less expensive means of resolving disputes compared with going to court.”

The speciousness of that last statement by Bradley has now been revealed by a study released by the American Association for Justice on October 27. The study found the following: