When the short-term interest of a 2-Year Note is higher than the interest on a 10-Year Note, you generally get a Recession.

It's not the rates that cause the Recession, it's the fact that there has, at that point, clearly been a mis-pricing in the mid-term Bond Market that will cause a recession because the average mid and long-term note-holders will have to refinance at higher rates, which then means they will have less money for other things and that means the econmy will begin to slow down and hence, a Recession is ahead.

Don't worry though, we got the last clear Recession warning back in early 2007 and everyone ignored that and the market continued to trade pretty well for another year – and then it crashed 66% and the World almost ended…  So party on World – we still have time.

Of course, this time may be a little different because of the MASSIVE amounts of Corporate and Government debt that have been fueling the rally for the past decade – a level of debt we all doubled down on in the past two years of Covid.  It wasn't the virus we've been fighting for $11Tn but the Recession which was supposed to accompany it and

We've discussed the burden of the Government having to refinance debt at 2% higher levels (the Fed's target) next year and this $12Tn of Corporate Debt is ONLY the Non-Financial Debt – it was the FINANCIAL debt that killed us in 2008 but that's very hard to get data on.  Still, $12Tn x 2% higher rates is $240 BILLION a year in additional interest and that's money that will be removed from the bottom lines of the companies we invest in so I would go through my portfolio very carefully and check the debt levels of the companies you invest in and make sure you take that into account… 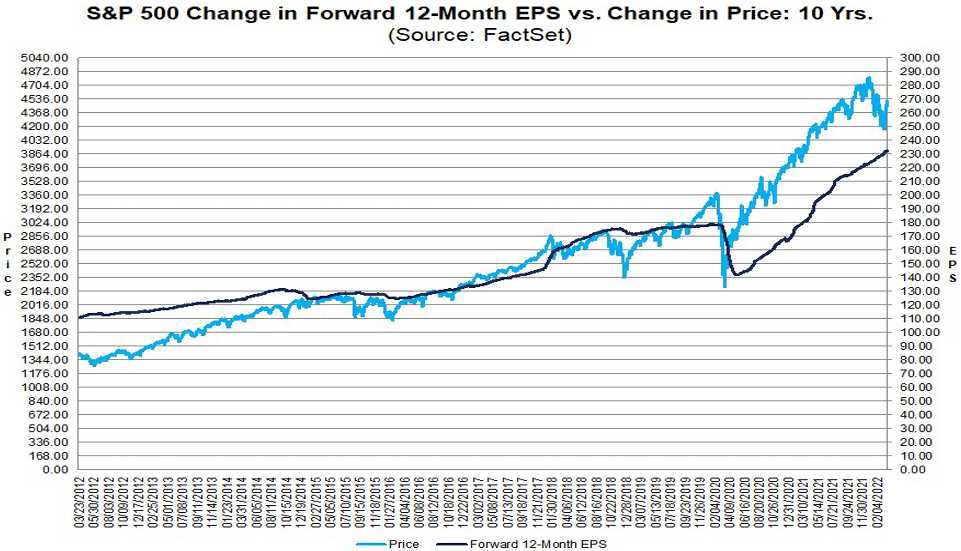 On the whole, Non-Financial Corporations make about $3Tn in profits and $240M is 8% of $3Tn – that's 8% less profits in 2023.  Do you see that reflected in the forward earnings estimates yet?  Now that the Fed has clarified their intent, responsible CEOs of indebted companies are going to need to take down their forward profit estimates – which is why we are very, very concerned about the upcoming earnings season.

As you can see from the chart, Forward EPS estimates last year were for roughly $180 per 3,800 S&P point (21x forward earnings) and now they are at $230 per 4,500 S&P point (19.5x forward earnings) but what if those earnings estimates are, in fact, 8% too high?  That would push us up to 21.3x and, let's keep in perspective – 16.5x is the normal forward P/E Ratio for the S&P because, as you can see from the above chart, Recessions do happen and those Forward P/E Estimates don't always come true.

Also keep in mind that those earnings include $11Tn of stimulus by the Government and the Fed in the past 24 months, that's almost $500Bn a month!  Certainly that's not going to continue yet forward growth is being extrapolated as if it is and, as I just said, no one is taking into account the higher rates that will have to be paid on borrowed money – not after 10 years of ZIRP.

The 2-Year Note has been trying to tell us the party is over since October and the last time it fell this steeply was the Great Crash of 2000 – yet no one is listening, are they?

At the moment, we have a nice war to distract us and that's already been a huge boon for Oil Companies and Defense Contractors just as Covid was for Internet Companes, Delivery Companies and Media Companies with 300M people sitting at home with nothing to do for much of two years.  Those companies haven't projected lower forward earnings but the Travel Companies have projected a rebound – as if you are expected to stay at home and keep ordering on-line while taking your vacation.

Not to mention companies like Pfizer (PFE), who made $20 BILLION more than usual last year and I don't begrudge them the profit for helping to save the World but there's also MRNA, who made +$10Bn, BNTX ($9Bn), JNJ ($13Bn), AZN ($8Bn)….  This is simply not sustainable – EITHER the companies that made money on Covid will go back to normal or the companies that make money in a normal World WON'T – you can't have BOTH!

And that's what the market is currently priced for – BOTH Covid and non-Covid companies are projecting continued growth and EVERYONE is ignorning rising rates.

Something has to give.

Do you think it will be a good idea to buy put spreads on DASH/TWLO/SNOW at these levels assuming that there will be a recession? Or are there other high flying stocks that can be more severely impacted by a downturn

High flyers/Harip – Dash is already 50% off – all 3 are, I think so I wouldn't chase them down as you can have consolidation squeezes and, of course, look at GME and AMC – it's very dangerous to short small stocks these days.

I think TSLA is a more attractive short at $1.1Tn but they are splitting so also too dangerous but there's a number you can compare to reality and clearly see it doesn't fit.

OK guys, I'm calling it quits soon so I can go enjoy my Birthday!

AMZN, (Trade)   has been initiated by Exane BNP Paribas as a underperform at 2800.0.

Thanks everyone and my girls are coming down for the weekend – so I'm in an excellent mood!

So is the market, apparently.

Happy birthday! Thank you for all the help!

Happy Birthday Phil! First Post from this newbie. I also want to express my deep gratitude for all of your help in getting me on this path. You are a God given blessing to me! May health and happiness follow you this day and for years to come!

stjeanluc
Member
Hey Phil! Not been on for a long time as my life is now super busy but had it on my calendar that today is your birthday! So Happy Birthday and hoping for many more!
qcmike
Member

Happy Birthday Phil! Have an amazing day – the market is cheering for you too!

Happy Birthday Phil and thanks for all you do!

Hey Happy Birthday , same as mine by coincidence , a very good day to be born .